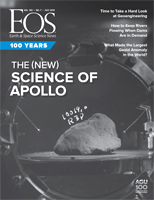 A rock sample brought back by Apollo 14 may contain the first evidence of Earth material on the Moon. New analysis of zircon grains in one lunar sample suggests that the zircon formed under conditions typical in Earth’s crust and not on the Moon.

“We have searched in a lot of Apollo rocks,” said Jeremy Bellucci. “In theory, this is the first and only piece of Earth we have found outside of Earth.” Bellucci is geochemist at the Department of Geosciences of the Swedish Museum of Natural History in Stockholm and lead author on a research paper that presented these results on 24 January.

The geochemistry and crystallization environment of the two zircon grains would be “unique to the Moon yet common to Earth,” the team wrote in their paper. If the zircons’ origin is verified, these grains would be some of the oldest Earth minerals discovered to date and would give a new look into Earth’s hellish early years.

The Apollo 14 astronauts landed on the moon in 1971 and collected nearly 43 kilograms of lunar material that they brought back to Earth. Scientists have been studying these moon rocks for decades to learn more about the Moon’s minerology, geochemistry, impact history, and magnetic environment.

One sample the astronauts returned with was cataloged as 14321, a 9-kilogram boulder nicknamed “Big Bertha.” Cutting into this boulder revealed a clast of granite that contained two zircon grains in a complex breccia. Zircons serve as an important paleoarchive on Earth, recording the time, temperature, pressure, and geochemistry when they formed. The oldest zircons, those from Jack Hills, Australia, may be nearly 4.4 billion years old.

Past studies have shown that these two lunar zircons are about 4.1 billion years old and formed during a tumultuous time in the solar system’s history called the Late Heavy Bombardment. Scientists think that Big Bertha, along with the other samples collected during Apollo 14, is lunar debris from an impact that formed Mare Imbrium. But Bellucci and his team believe that the two zircons were born even farther away.

A Lot of Weird Things

The researchers analyzed the geochemistry of the zircons and the surrounding breccia to determine their formation environment. They calculated the crystallization pressure by measuring the concentration of titanium in the zircons and in breccia grains with an ion mass spectrometer. On the basis of this measurement, the team found that the crystallization pressure translated to a depth about 170 kilometers below the Moon’s surface.

Bellucci and his team then simulated how deeply the Imbrium impact would have excavated the Moon’s surface. Their models suggest that material from the base of the lunar crust, about 30–70 kilometers deep, was ejected from the crater. This depth is far shallower than where the zircons would have crystalized had they formed on the Moon, the team noted.

The zircons crystalized in an oxygen-rich and possibly water rich environment that would be unusual for the Moon but common in Earth’s crust.

On Earth, however, the crystallization pressure corresponds to about 20 kilometers deep in Earth’s crust, a region that easily might have been excavated by an impact, Bellucci said.

Next, the team measured the concentration of oxidized cerium ions in the two zircon grains. This measurement was used as a proxy for the amount of freely available oxygen at the time the zircons crystalized. The cerium measurements showed that the zircons crystalized in an oxygen-rich and possibly water rich environment that would be unusual for the Moon but common in Earth’s crust.

The cerium measurements also revealed that the zircons crystalized at a temperature that is much lower than other lunar magmas and is more in line with shallow-crust minerals on Earth.

“A lot of weird things happened in this clast where these zircons came from” if they came from the Moon, Bellucci said. The breccia that surrounds the zircons, however, has Moon-like geochemistry.

The Moon or Earth?

Nevertheless, the researchers considered whether the sample could have formed entirely on the Moon near Mare Imbrium. The Imbrium impact then would have ejected the clast to its eventual home at the Apollo 14 landing site. In this scenario, a shock wave associated with the impact would provide the higher crystallization pressure. However, the shock wave also would have left behind other signs in the grains that are notably absent, the team said.

But if the zircons formed in Earth’s crust during the Hadean (>4.0 billion years ago), that would explain the low temperature, high pressure, and high oxidation environment in which the zircons crystalized, Bellucci’s team argues. An impact on Earth might have ejected the material to the Moon, some of which then mixed with lunar material. This mixing would explain why some of the sample’s grains suggest a lunar origin while the zircons suggest a terrestrial one, Bellucci explained.

“[The Moon] could serve as an inventory to study the Hadean Earth, which we don’t have any pieces of anymore on Earth,” he added.

First of Its Kind

The results are “very intriguing,” according to Carolyn Crow, a research associate in geological sciences at the University of Colorado Boulder who was not involved with this research. “These zircons do appear to have more Earth-like trace element compositions relative to the rest of the Apollo zircons,” she told Eos.

However, Crow cautioned that some of the team’s assumptions—particularly that the zircon, quartz, and other minerals in the breccia crystalized at the same time—still need to be verified. If the assumption is false, that could rule out Earth as an origin. “That being said,” she continued, “if further work is able to confirm that this assumption holds true, then this would be compelling evidence for a terrestrial meteorite on the Moon.”

“I expect there could be a bit of controversy because this is the first of its kind,” Bellucci said. “Hopefully,” he said, “it inspires a search for more Earth materials and further analyses on these samples.”

Hear Ye! Hear Ye! A Declaration of the Rights of the Moon

A Golden Opportunity to Save Shwedagon Pagoda’s Acclaimed Dome