Humankind will need energy, water and materials to survive into the future on Planet Earth. Many of these resources come from the subsurface; in turn, the subsurface is used to store waste products. Quantifying Uncertainty in Subsurface Systems, a new book just published by the American Geophysical Union, explores what we know and don’t know about the extent underground resources, and how we can make decisions in the face of uncertainty. Here one of the editors answers some questions about this field.

What are the different types of subsurface resources of interest to humankind?

In terms of energy, burning hydrocarbons is not a sustainable practice, and we are slowly starting to see a transformation from oil and coal to natural gas and renewables. Natural gas is extracted from underground, while geothermal energy, both used to produce electricity and heating for building, also makes use of subsurface characteristics.

In terms of water, the groundwater system is the main source of drinking water in many countries, but this subsurface resource is vulnerable to pollution from industry or agriculture, and in competition with food and energy.

Meanwhile materials, such as minerals, are needed for the design of batteries (e.g. lithium, cobalt), infrastructure (iron, copper), and in devices (rare earth elements). These resources need to be mined, which is also a polluting practice, hence the environmental impact needs to be minimized.

How certain or uncertain are we about the quantity of these resources that exist?

Estimates for all the above-mentioned resources exist, but generally do not account for undiscovered resources, or the advent of new technologies that turns previously uneconomical resources into economical ones. A good example is shale resources, which have turned the United States in the largest producer of petroleum and natural gas hydrocarbons. Nobody would have predicted this ten years ago. Currently, exploration is not high on the priority list for resource companies, due to relative low commodity prices, but big data approaches, relying on geophysics and boreholes, are being developed to better understand uncertainty on resource potential in many areas of the world.

How does uncertainty effect those trying to extract different subsurface resources?

The subsurface is complex and we will never be able to fully access it, due to limited data acquisition. But in developing subsurface resources, decisions need to be made on where to extract them, how to extract them, when to stop extraction, and what the environmental impact is of the extraction process. This is true for all the above-mentioned earth resources. Thus, these decisions are made under uncertainty. Decision science is therefore an integral part of uncertainty quantification.

What is “uncertainty quantification”?

In the broadest sense, it is a measure of our lack of understanding. This is difficult: it is easier to list what we know than what we don’t know. The quantification part points to a scientific approach to the problem that involves axioms, definitions and rules. Uncertainty quantification is both prescriptive and normative: a set of rules on how to proceed are created based on mathematics and logic, in particular, probability theory and statistics. Within those rules, calculations are done that involve observed data as well as global understanding of the subsurface system created from experience. Thus, it allows making optimal decisions even if we cannot perfectly predict the outcome of the actions we take in the exploration, appraisal and development of subsurface resources.

What is a Bayesian approach and how can it be applied to uncertainty quantification?

Back in the eighteenth century, Thomas Bayes was interested in probability, and many scientists know of Bayes’ rule, a method for calculating conditional probabilities. However, his main contribution is the notion of “prior uncertainty” which captures what we already know about the unknown before acquiring data.

If we know nothing, then many use a uniform distribution. However, in the subsurface, we know already a lot, since the subsurface consists of a geological depositional system that has many analogies on other part of Earth. The Bayesian approach, as applied to the subsurface, calls for quantifying this often-descriptive geological information. Hence, the need to involve domain expert geoscientists into any uncertainty quantification is a requirement of the Bayesian philosophy.

What challenges remain in the field of uncertainty quantification?

Our book lists seven challenges, of which two are: quantifying geological knowledge and education. Given the large uncertainty about the subsurface, the prior uncertainty (what we already know about geology) becomes one of the main drivers in decision making under uncertainty. Geological knowledge is often descriptive; turning this knowledge into actual useable prior models is a challenge. This challenge can be addressed by building process models, computer codes that simulate the depositional systems that contain these resources. 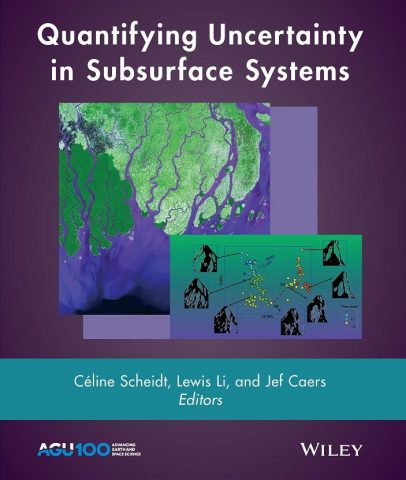 In terms of the education challenge, there are very few courses that comprehensively cover all aspects of decision making under uncertainty in the geosciences, even in the resources industries. The problem lies in the multidisciplinary aspect requiring knowledge of geosciences, data science, computer science and decision science.

In response, I developed a course with the same title as this book, where students bring their own decision under uncertainty problems and we walk through the various aspects of uncertainty quantification, from data to decision.