The American Geophysical Union (AGU) has been recognizing excellence in the geosciences for more than 70 years, with 23 Union-wide honors, annual recognition of new Fellows, and numerous section and focus group honors. Recognizing these achievements is important both to the advancement of our science and to the inspiration and motivation of the next generation of scientists.

To reduce the barriers for engagement and success in this essential scientific enterprise, AGU is working to build a more transparent culture around the awards and nomination process. One of the ways we did this was by hosting a workshop at the 2014 Fall Meeting entitled “Improving Your Success in AGU Honors: Tools, Tactics and Tips.” Although the workshop yielded numerous helpful insights, two important issues that require attention stood out.

To Increase Demographic Diversity of Awardees, Increase Diversity Among Nominators and Nominees

Most professional societies find that persons of color, women (including women of color), and members who are geographically distant from the center of power are inadvertently but regularly underrepresented among awardees (Figure 1). Ensuring fairness is not easy; however, AGU has extracted, processed, and presented demographic data on awardees and membership that allow us to see how we are doing and how we can improve the process going forward. Although these data focus on gender diversity, AGU recognizes the need to improve overall diversity in the honors program and is working on gathering additional data to determine the underrepresentation of other diverse groups.

The data unfortunately reveal that like most other professional societies, AGU honors and awards tend to go to majority members. At AGU, 22% of members are women; however, women receive only 17% of research awards (Figure 2). Analyzing the available data and referring to the body of literature on this topic permit us to identify where the disconnects occur and what can be done to eliminate the imbalance. 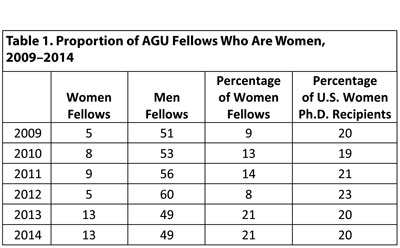 Women are also underrepresented among AGU Fellows and have been for years (Table 1). Once nominated, however, their proportion in the nominee pool stays consistent as they progress through the review and approval steps, suggesting that the selection process is a fair one and that implicit biases shared by men and women are not overtly disadvantaging women at this stage. One reason that women are underawarded at AGU is that they comprise only 14% of the nominee pool (Figure 2). Research indicates that both men and women overlook women colleagues for professional awards, nominations for promotions, and leadership positions relative to their presence in the available pool. Therefore, one way to move toward equity is to simply notice our underrepresented colleagues and proactively organize the community to submit nominations of worthy candidates.

Although the data show that the success rate of a nominee is not influenced by the gender of the nominator, only 14% of nominators for awards are women, and letters of support for nominations are less likely to be written by women. For a variety of reasons, not the least of which are higher service burdens and disenfranchisement, women are simply less likely to participate in the AGU honors and recognition process.

One positive note, however, is that in 2013, an exception to the underrepresentation trend occurred, and 22% of the individuals elected as Fellows were women—which reflects the 22% of AGU’s 2013 membership that was composed of women. That success was the result of a conscious effort on the part of those involved in the AGU Fellows awarding process.

To Increase the Success of a Nominee, Improve the Quality of the Nomination

Although most nominees are truly deserving of an AGU honor or award, the nomination packets submitted do not always highlight the person’s work in a way that makes the impact of his or her accomplishments clear. To help facilitate a more successful nomination process, AGU has compiled the following list of tips for nominators:

We must apply more attention and thought to who we nominate for awards and how we nominate them.
From the workshop discussions, AGU was able to compile a list of myths and facts with regard to the honors program and the nomination process that is now available. In addition, AGU’s Fellows Program Review Task Force recently issued a report highlighting their recommendations for improving the Fellows program.

In short, the research shows that we must apply more attention and thought to who we nominate for awards and how we nominate them. The inspiration and recognition the AGU honors program provides are hugely important. We owe it to ourselves and to the next generation of Earth and space science pioneers to do better.

The Threat at Thwaites

The Future of the Carbon Cycle in a Changing Climate