Modern society relies on electric currents. We can generate them, guide them from one place to another (including very remote places), and make them work for us. The use of electricity has provided the greatest technological advances in humankind. But electric currents also occur in nature by themselves and “run the show” in outer space. Electric Currents in Geospace and Beyond, a new book just published by the American Geophysical Union, explores our most up-to-date understanding of electric currents in the solar system. Here the editors answer some questions about past and recent advances in this field.

How and when were electric currents in space discovered?

Already in 1779, the American scientist, inventor and politician, Benjamin Franklin, spoke of a “quantity of electricity” in the atmosphere causing the aurora borealis.

Much later, in 1908, the Norwegian pioneer of space physics, Kristian Birkeland, laid out a first theory of electric currents reaching out to space.

All this happened long before the advent of the space age, when the first in situ evidence for the existence of space currents was obtained using satellites in the 1960s.

It is now understood that outer space is fundamentally electrical in nature.

How are these currents observed and measured?

Since electric currents are comprised of moving charged particles, such as ions and electrons, the most direct way to measure currents is by probing and counting the individual particles. Highly tuned instruments that fly on board satellites do exactly that. While particle counting is quite challenging, as one might expect, one can also make use of the fact that electric currents generate a magnetic field around them, which in turn can be measured, more easily, by instruments, called magnetometers. From these magnetic fields one can then infer using Maxwell’s equations the underlying currents.

In fact, this remote sensing allows us to infer some electric currents in outer space from ground-based magnetometers. However, a difficulty is to separate the field contributions at the same location from several distant currents that are simultaneously present.

What are the main characteristics of electric currents in near-Earth space?

In our homes and in cities, electric currents are guided along thin wires, but this is far from the case in outer space. Electric currents are spread out over a few hundreds of meters to tens of thousands of kilometers, and their cumulative magnitudes are much bigger than any currents on Earth. For example, the ring current, with a strength of 2–4 million Amperes (MA), flows in closed loops in an equatorial current sheet out to distances of 60,000 kilometers and merges into the magnetotail current on the nightside beyond this distance. The strength of the tail current exceeds 10 MA and is closed at the dawn and dusk flanks of the magnetotail by the Chapman‐Ferraro current system of the magnetopause. Field-aligned currents flow between the ionosphere and magnetosphere along the background magnetic field with magnitudes of 1-3 MA.

How do the characteristics of electric current systems vary around other planets and heliospheric bodies?

Interestingly, electric currents organize themselves in similar fashion around planets having an ionosphere and a magnetosphere while being buffeted by the solar wind. In comparison to Earth, the ring currents at Saturn and Jupiter are about 10 and 90 MA, respectively, while the tail currents are greater than 10 and 70 MA, respectively. The large-scale field-aligned currents between ionosphere and magnetosphere can reach magnitudes of 6 and 60 MA at Saturn and Jupiter, respectively. In contrast, the Sun’s electric currents are orders of magnitude larger. For example, currents at the surface of the Sun near sunspots are typically 100,000-1,000,000 MA.

What have been some of the recent research advances in this field?

Multi-spacecraft missions in the near-Earth space launched in the past 20 years (e.g., Cluster, THEMIS, MMS, Swarm, or the AMPERE experiment using Iridium satellites), together with comprehensive networks of ground instruments (e.g., SuperMag, SuperDARN, MIRACLE, THEMIS), made it possible to advance the understanding of the electric current systems in the magnetosphere and ionosphere – like those associated with substorms and, on smaller scales, with bursts of fast magnetospheric plasma flows, the cusp current system, the multi-scale structure of the field-aligned currents, or the three-dimensional configuration of the ionospheric currents.

The new technique of energetic neutral atoms enabled global imaging of the ring current around the Earth (by the IMAGE mission), including storm time development, and Saturn (by the Cassini mission), while missions like ARTEMIS and Rosetta provided detailed perspectives on the currents around the Moon and in cometary comae, respectively.

In solar physics, the advent of instruments in space to infer electric currents at the surface of the Sun (on the Hinode and Solar Dynamics Observatory satellites) has resulted in measurements of unprecedented quality and resolution, leading to many new research results.

How is the book organized? 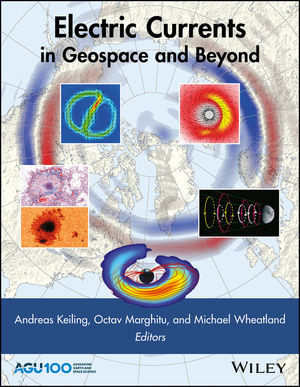 A remarkable result of space research is that there are several common current systems (ring currents, current sheets, field-aligned currents, ionospheric currents) that occur at several planets in spite of their great differences, such as physical dimension, planetary rotation rate, ionospheric conductivity, and exposed solar wind conditions. However, along with these current systems goes a large variety of different aspects of each current system. Therefore, we decided to organize the 30 chapters in the book by these common current systems (as separate sections), allowing direct comparisons among different astronomical bodies, which also includes the Sun, moons and comets. This aligns with the ever-growing interdisciplinary approach to space physics.

A Juno Era Model of the Jovian Magnetosphere