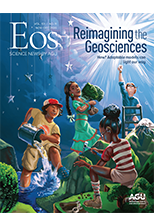 Dozens of researchers preparing to present their findings at one of the world’s largest scientific meetings are just teenagers. They’re part of AGU’s Bright Students Training as Research Scientists (Bright STaRS) program, which affords middle and high school students a unique opportunity to stand in the shoes of professional scientists at AGU’s Fall Meeting. The program aims to provide a model for making Earth and space sciences more inclusive and immediate to young people who may not have considered science as a career.

Bright STaRS debuted in 2003, drawing 31 participants. “Originally, it was just local,” said Jennifer Saltzman, director of outreach education for the School of Earth, Energy and Environmental Sciences at Stanford University and one of the coordinators of the program. Back then, Fall Meeting was held at the Moscone Center in San Francisco, so most participants attended school in the San Francisco Bay Area.

Now in its 18th year, Bright STaRS draws a much larger and more diverse pool of students: Last year’s cohort included over 80 participants from 14 states, Turkey, and Hong Kong.

Any student taking part in a summer or after-school research experience related to Earth and space science can participate in Bright STaRS. Students typically learn about research opportunities through their teachers or local colleges and universities, said Saltzman.

Bright STaRS participants showcase their research in a dedicated poster session, and just like other meeting attendees, they’re challenged to field questions about their work and explain the importance and impact of their results, said Pranoti M. Asher, assistant director of AGU’s Grants and Education Programs. “They get that real-time feedback and interaction.” Projects presented in the Bright STaRS session span the breadth of Earth and space sciences. Recent investigations have focused on trends in precipitation, biodiversity in rain forests, and landslide mapping.

One of the benefits of Bright STaRS is that participants get to experience a large meeting, said Asher. After the students present their posters, they join mentors, family members, AGU staff, and long-time supporters at a celebratory luncheon. They receive complimentary registration and are encouraged to attend scientific sessions, plenary talks, and events like the Academic Showcase, which highlights undergraduate and graduate degree programs in the geosciences.

The program fosters student research, communication, and social skills and imparts knowledge about career options in the sciences, said Saltzman. “We encourage all AGU members to support this pipeline.”

More Than the Scientific Method

Participants learn a broad set of skills, from how to test a hypothesis to science communication methods, said Daniel E. Ibarra, a geochemist at the University of California, Berkeley, who has mentored two Bright STaRS students.

Bright STaRS is a family affair in the Ibarra household. (Turns out, that’s not uncommon among both organizers and students.) Daniel’s mother, Diana Ibarra, helps organize a group of participants in Hong Kong. The elder Ibarra, a science education administrator at the private Independent Schools Foundation Academy in Hong Kong, brought her first student to Fall Meeting in 2013 and has since grown the Hong Kong contingent significantly. For the past few years, she’s consistently brought 20 or so students to the meeting. This year is a record breaker, however, said Ibarra. “I’ve got 29 students.”

At the convention hall, Ibarra guides students in exploring the wide variety of research presented at the meeting. “We’ll walk them through a poster that they probably don’t understand at all,” she said. “They get to see the breadth of research opportunities that might be available to them.”

Ibarra remembers bringing a student to the Fall Meeting who was fascinated by typhoons, a common phenomenon in Hong Kong. “This kid met every single person who was doing typhoon research over 2 years at [Fall Meeting],” she said. “He made a point of introducing himself to every one of them.”

“The students are all cheerleaders for each other,” said Jill Karsten, a geological oceanographer and AGU Board member who cofounded Bright STaRS. “They’ll go around and visit the other posters.”

Many Bright STaRS alumni have gone on to earn undergraduate or graduate degrees in science. Others have launched careers in fields as varied as civic engagement, data science, and finance. Eos caught up with three Bright STaRS alumni to talk about how the experience influenced their career paths.

While a sophomore in high school, Michael Wucher studied arsenic transport in the Mekong Delta. As part of that research experience, conducted at Stanford University, he participated in Bright STaRS in 2011. “It was really amazing and interesting to be in a lab,” Wucher said and pointed to painstaking pipetting skills required by his research.

“The program, and specifically the mentor I had, really guided me,” Wucher said. His mentor, Jason Stuckey, then a soil and environmental biogeochemistry graduate student at Stanford, attended Fall Meeting with Wucher.

The program also taught Wucher how to communicate his research. “I remember going through and making different versions of the poster,” he said. (Ibarra also emphasizes science communication with his students: “Graphs and figures and pictures actually tell a lot more” than words on a poster, he said.)

Wucher credits Fall Meeting with getting him thinking about college programs in the Earth sciences. After initially considering a history major at Pomona College (“I wanted to become a Byzantinist”), his experience in Bright STaRS motivated him to enroll in a geology class, where he learned about X-ray diffraction. He found the technique fascinating and went on to earn his degree in geology in 2017.

From there, Wucher headed east to Brown University, where he completed a master’s degree in geological sciences. He’s now applying for jobs in industry. “I got interested in geoengineering approaches to pollution and climate change,” Wucher said.

A Taste of Being a Scientist

Janice Shiu remembers the rows and rows of posters. “There were so many people,” she said of the 2015 Fall Meeting, where she presented her Bright STaRS research about the Mid-Pleistocene Transition. Shiu had spent the previous summer working as a high school intern with Petra Dekens, a paleoclimatologist at San Francisco State University.

“My parents didn’t have the sort of connections that a lot of other students’ parents had. Having the program was really crucial for me.”
Shiu relished the opportunity to attend the conference. “I went to peoples’ talks and really experienced what it was like to attend something academic,” she said. “It was a taste of what it was like to be scientist.”

Bright STaRS provided a particularly meaningful experience to Shiu, who went on to become a first-generation college student. “My parents didn’t have the sort of connections that a lot of other students’ parents had,” she said. “Having the program was really crucial for me.”

Earlier this year, Shiu graduated from the Massachusetts Institute of Technology with a degree in Earth, atmospheric, and planetary sciences. She’s currently working as an analyst at Compass Lexecon, an economic consulting firm, but hasn’t ruled out a future in Earth sciences. A job that combines environmental work with data science would be ideal, she said. “I really enjoy computing and crunching numbers.”

For her Bright STaRS project, Claire Valva got her hands dirty. Valva, then a senior at Piedmont High School in California, worked on a 6-acre (2.4-hectare) farm on the Stanford University campus in the summer of 2015. “Our experiment was testing different combinations of commercial potting soil and compost for plant growth,” she said. Valva presented her research at the 2015 Fall Meeting, an experience she describes as “both intimidating and fun.”

Valva credits Bright STaRS with teaching her how to communicate research visually. “I learned a lot about the optimal balance between figures and text,” she said. Thanks to the program, Valva also gained confidence fielding questions from fellow scientists. “Being able to summarize my research has been a skill that I’ve used tens of times since.”

Earlier this year, Valva graduated from the University of Chicago with degrees in geophysical sciences and mathematics. She’s returned to Fall Meeting twice since being a part of Bright STaRS, and she’ll likely participate again in the future—Valva just started a Ph.D. program in mathematics and atmosphere ocean science at New York University.

Looking to the Future

This year, AGU’s Fall Meeting will be held virtually, and Bright STaRS will be a part of it. “The program is still on,” said AGU’s Asher.

Bright STaRS and similar programs (such as the National Institute of Health’s High School Scientific Training and Enrichment Program and the Department of the Navy’s Science and Engineering Apprenticeship Program) share lofty but critically important goals: to foster scientific thinking and encourage the next generation of scientists. They aim to challenge participants and mentors alike to think deeply about effective research and communication practices. And to have fun while doing it.