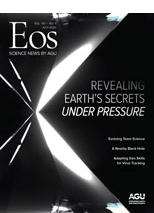 Around 50 years ago, scientists interested in the composition, mineralogy beneath the Earth’s surface, and other related questions were spread throughout many disciplines: tectonophysics, petrology, and geomagnetism, among others. When they began organizing their research under a new name—mineral physics—“it became evident that new scientific advances would provide dramatic progress in our understanding of Earth’s interior,” writes Robert Cooper Liebermann in his retrospective of AGU’s Mineral and Rock Physics section.

Our July issue, which looks at those scientific advances that came from developments in high-pressure and high-temperature experimentation, is guided by insight from Sébastien Merkel, Eos science adviser and president-elect of the Mineral and Rock Physics section. (We also extend our appreciation to section president Wenlu Zhu for additional support.) Now a professor at the Université de Lille in France, Merkel studied physics in undergraduate school and realized that he could bring a new viewpoint to the research going on in the geology department. “I thought that re-creating planetary interiors in the lab was a fun thing,” Merkel told me. And you can’t beat the tech: “We run experiments in large-scale facilities with synchrotrons and high-power lasers. I like being in contact with and learning how to master those beasts.”

That powerful equipment is being harnessed to explain the “new core paradox.” Researchers had largely assumed that the inner core was about as old as Earth itself, until an explosive 2013 paper on high-temperature experiments suggested that it was rapidly cooling—and very young, perhaps a billion years old or less. Diamond anvil cells were brought into the field, producing new papers and a conversation on errors. “This is exciting stuff,” University of California, Santa Cruz’s Quentin Williams told Eos for the article. These questions “will pose a challenge for the next 15 years for the community.”

Earth isn’t the only planet whose insides we’d like to peer into. “The experiments for studying the interiors of other planets are very new,” said Merkel. “When I was a student, we could not even dream of measuring anything at those conditions.” In “Remaking a Planet One Atom at a Time,” we report on scientists using mechanisms such as dynamic compression from high-energy optical lasers to create pressures as high as a billion atmospheres. These lasers, with as much power as a bolt of lightning, have shown us that liquid helium rains down on Saturn. And scientists are looking even farther away. “We can actually say something on the structure of exoplanets, thanks to lab experiments,” said Merkel. “This is amazing.”

This issue features only a small look into the potential of mineral physics. The future of these extreme experiments may provide answers to some of our most fundamental questions: How did Earth evolve from a ball of molten rock into a planet that supports life? How could it happen on other planets? What is Earth’s core made of besides iron? How much water is inside Earth, and how does it affect the planet’s water cycle? What are the mechanical and chemical properties that make Earth, Mars, and Venus so different?

The next generation will be pursuing these questions, which is why we began this issue with words from a mentor. “Bob [Liebermann] has trained and motivated a whole generation of scientists,” said Merkel. “He was always supportive, dynamic, and community driven.” Liebermann notes in his article the rise of women directing mineral physics labs and the establishment of graduate student support and early-career awards. Here at Eos, we are excited to watch the mineral physics community continue to grow and diversify so that it can discover answers to all of these planetary mysteries.