During AGU’s lifetime, our members have explored it all, from making novel observations that allow us to probe Earth’s core to launching spacecraft that let us gaze far out into remote solar systems. During our Centennial year, we wanted to take a look through some of this history, so a few AGU staff members took an afternoon to dig through boxes of documents chronicling our past.

As we delved into the archives, we found countless treasures:

We’ve compiled a selection of a few of our favorite finds from our trip to the past.

AGU celebrates the accomplishments of Earth and space scientists every year with the organization’s highest honor, the William Bowie Medal, shown in a program from a 1960s award ceremony (above, left). The award’s namesake and AGU’s first president was William Bowie of the U.S. Coast and Geodetic Survey, who received the inaugural medal in 1939. Recognized for his contributions to fundamental understanding of geology and geodesy, Bowie also exemplified AGU’s motto from the 1950s—”unselfish cooperation in research”—through extensive volunteer work in his field.

We unearthed a copy of Bowie’s obituary (above, right) in the 12 September 1940 edition of the Engineering News-Record, which reads “He was widely recognized in this country and abroad for the many contributions in surveying and geodesy that sprang from his keen understanding and wide knowledge.”

We found many records of the 80 scientists who have received the William Bowie Medal to date.

Above is the award program for the medal’s 33rd recipient—and first woman awardee—Inge Lehmann, a seismologist from Denmark who received the prize in 1971 for her ground-breaking discovery, 35 years earlier, of Earth’s inner core. AGU went on to name another award in her honor, the Inge Lehmann Medal, which is given to scientists in recognition of “outstanding contributions to the understanding of the structure, composition, and dynamics of the Earth’s mantle and core.”

Letters from Before the Internet

Before people could search Google for answers to their burning questions, they wrote letters. We found this intriguing request received by AGU in March 1974 (above, left; the mail may have been slower in the 20th century, but the letter writer’s date of 1954 is surely a typo) from someone wanting to know why people and objects tend to disappear in the Bermuda Triangle. “Or ‘how they are disposed of’ once they are ‘taken-inside’ the time analogies of the world,” the author wrote. In a response (above, right), AGU staff associate Leonard Levin pointed to ocean currents as a potential reason for what he called “easily explainable” oceanographic phenomena.

In 1973, another curious citizen sent a letter to AGU (above, left) asking for more information about a new report theorizing future melting of the polar ice caps. “In addition to my reservations concerning Mr. Wilcox’s report,” he wrote, “I believe further that the flooding estimated as a result of the possible melting of the polar ice caps is a myth that has little basis when thoroughly examined.” Levin was again the one to respond, taking the time to research the letter writer’s questions and point him to the scientist (with his home address!) and more information.

Tucked away in several boxes were materials documenting AGU’s formation and development over the years, including a 1954 issue of Transactions, American Geophysical Union featuring this chart of membership numbers from 1921 to 1952. In the first few years, AGU capped its membership at just 65 people. This limit later expanded to 75 in 1922 and 100 in 1928, before the cap was removed entirely in 1930. By the end of 1952, the last data point on this chart, AGU boasted nearly 5,000 members across the world. A hundred years after AGU’s founding, our members are 62,000 strong and represent 144 countries—an incredible journey from the organization’s modest beginnings.

The Changing Face of Eos 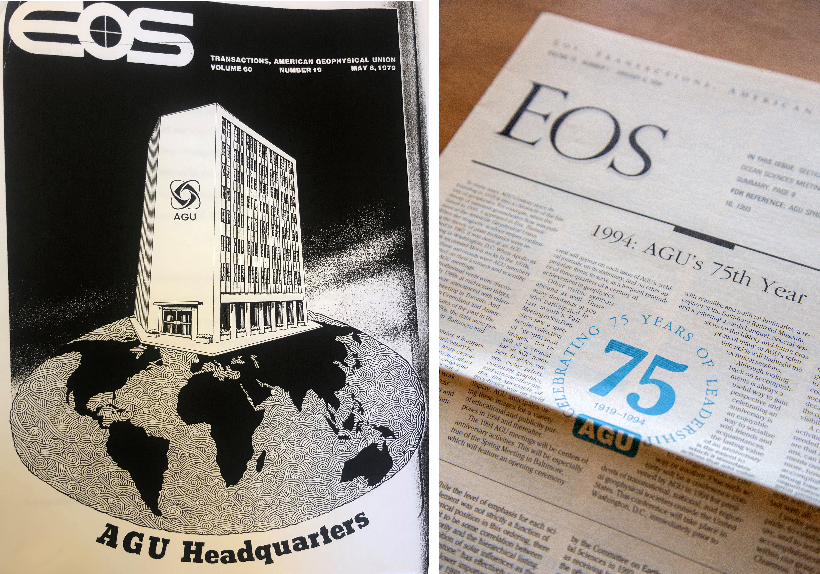 The front page of Eos has changed many times since its first publication under the name in 1969. Although the publication was launched in 1920 as Transactions, a compendium of AGU’s activity, its meetings, and research, it has evolved into a digital science news and perspectives website with a monthly print magazine for AGU members.

The cover dated 8 May 1979 (above, left) announced AGU’s new headquarters at 2000 Florida Ave NW in Washington, D.C., where our offices remain today, newly renovated into our award-winning net-zero energy home base. Another cover from 1994 (above, right), from the era when Eos was produced as a weekly newspaper, covered AGU’s 75th anniversary. In the front-page story, Thomas Graedel, the chairman of the anniversary committee, wrote, “AGU, like other diamond anniversarians, can be proud of a wealth of achievements over three-quarters of a century. Even more, however, it can look forward to future accomplishments that will build on today’s strong base of scientific competence and organizational efficiency. AGU’s future has great promise.”

The Geomagnetic Blitz of September 1941