Eos magazine received a gold medal for most improved magazine or journal in the Association TRENDS 2015 All Media Contest. The magazine was one of nearly 400 entries in the contest’s 22 categories. 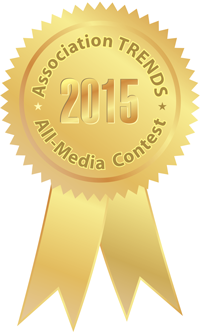 Eos was a weekly print tabloid newspaper from 1979 to 2014. Eos.org, the daily Earth and space science news website, was launched 9 December 2014. At the end of that month, the tabloid was phased out, and in mid-January 2015 the newly launched companion semimonthly magazine was sent to members of the American Geophysical Union (AGU).

This is the third award garnered by the website and magazine in a little more than a year. Several months after launch, Eos.org received a best in class award for science/technology websites from the Interactive Media Council, Inc. In June 2015, Eos.org won a silver EXCEL Award from Association Media & Publishing for Web publishing design excellence.

The Association TRENDS All Media Contest is an annual competition that recognizes creative and effective communication vehicles developed by associations over the prior year.

AGU members may receive the magazine upon request to [email protected]. Others can read an online PDF of each issue.

Text © 2016. The authors. CC BY-NC-ND 3.0
Except where otherwise noted, images are subject to copyright. Any reuse without express permission from the copyright owner is prohibited.

This Week: The Best of Eos