The White House’s proposed budget for the National Oceanic and Atmospheric Administration (NOAA) would provide the agency with $5.983 billion in discretionary funding for fiscal year (FY) 2016, an increase of $534 million, or 9.8%, above NOAA’s FY 2015 enacted amount of $5.449 billion. The proposal, released on 2 February, would increase discretionary funding for all of the agency’s major science offices.

“NOAA’s proposed budget faces political challenges, but it is critical that investments be made in the basic ocean research that NOAA science provides.”
At a 24 February briefing, NOAA Administrator Kathryn Sullivan said that request amounts are “very encouraging figures” that support critical investments in the agency’s priorities. Those priorities include providing information and services to make communities and economies more resilient, “evolve” the National Weather Service (NWS) and help build a weather-ready nation, invest in observational infrastructure, and achieve organizational excellence, said Sullivan, who also serves as under secretary of commerce for oceans and atmosphere. 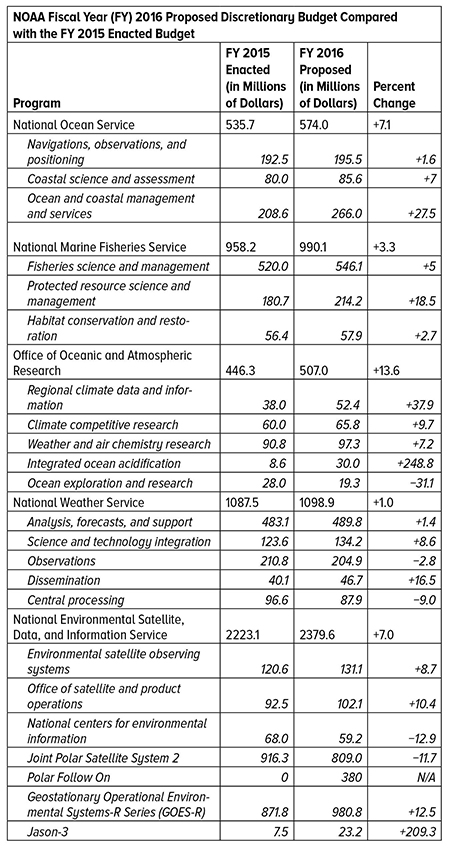 According to the Ocean Conservancy, the budget request includes strong funding for NOAA. Addie Haughey, senior manager for government relations for the Ocean Conservancy, told Eos, “NOAA’s proposed budget faces political challenges, but it is critical that investments be made in the basic ocean research that NOAA science provides.”

Funding Would Increase for All of NOAA’s Major Science Offices

A breakdown of funding for NOAA’s major science offices is outlined in the accompanying table. Projects within each major office are marked in italics.

Although the overall budget for the National Weather Service would inch upward about 1%, several programs lines, including observations, would see funding cuts. The funding dip for central processing reflects efficiencies achieved through a new information technology service delivery model for forecast offices, according to NOAA.

Richard Hirn, general counsel for the National Weather Service Employees Organization, told Eos, “If enacted, the president’s NOAA budget will make Americans less safe because it proposes to cut an additional 122 operational staff members from weather forecast offices nationwide. Since 2010, the administration has reduced the non-supervisory workforce at the National Weather Service by over 400, most of which were employees classified as ‘emergency essential.’ The administration’s request to substantially increase funding for all other NOAA line offices while further reducing the NWS workforce is simply baffling in light of the increasing frequency of severe weather events.”

Within the satellite program is funding to begin a Polar Follow On satellite system, which Sullivan said is critical in continuing the agency’s polar weather satellite observations. The Polar Follow On would help “ to ensure data continuity for key sensors as the current generation of satellites reaches their end of service,” according to NOAA.

In addition, following Jason-3, future ocean altimetry missions “will be the responsibility of NASA as part of a new framework for Earth-observing satellite responsibilities,” according to NOAA budget documents.

“The FY 16 President’s Budget supports NOAA’s broad environmental mission and redefines NASA and NOAA earth observing responsibilities whereby NOAA will be responsible for satellite missions that directly contribute to NOAA’s ability to issue weather and space weather forecasts and warnings to protect life and property,” according to NOAA.

The redirection of activities between NOAA and NASA “is a distribution of responsibilities that the president has proposed in the budget,” Stephen Volz, NOAA assistant administrator for satellite and information services, told Eos. “It is an acknowledgement of the strengths of the different agencies.”

Within NOAA’s program support budget, funding for the agency’s Office of Education would fall to $16.4 million from $27.6 million. Several NOAA science, technology, engineering, and mathematics (STEM) programs would be terminated, including Sea Grant STEM education activities and the Teacher at Sea Program.

The proposed STEM cuts are part of the administration’s plan to reorganize federal STEM education programs to increase the impact of federal investments. That plan, laid out in 2013, calls for the Department of Education, the National Science Foundation (NSF), and the Smithsonian Institution to be the lead STEM education agencies.

Louisa Koch, NOAA director of education, told Eos, “The administration has reduced by over 40% the number of STEM education programs in the recent years. NOAA is working closely with NSF, the Department of Education, and the Smithsonian to share resources and leverage NOAA’s vast STEM education resources.”

Responses to Cutting the Teacher at Sea Program

During the 24 February budget briefing, Sullivan responded to several questions from educators who have been involved with the Teacher at Sea Program and who urged NOAA to continue the program. “The administration began a couple of years ago, prompted by a variety of reports from the [General Accounting Office], and Congress, and others to look across all the agencies at what was admittedly a very fragmented and dispersed landscape of funding for STEM education,” said Sullivan. “This budget proposes to continue down that road.” She added that the budget does not reflect any critical critique or negative evaluation of the program.

Jacob Tanenbaum, a fourth- and fifth-grade science and technology teacher with the South Orangetown Central School District in Rockland County, New York, was one the people urging Sullivan to retain the Teacher at Sea Program. He told Eos, “What makes this program so different and so exceptional is that teachers gain in-depth first-hand knowledge by working alongside and partnering with the scientists at NOAA. We are not just teaching and learning about the science, we are participating in it and our students, through our blogs, are right alongside us asking questions directly to the scientists.”

He continued, “We form partnerships with scientists which often last well beyond our time at sea. To take such an opportunity away at the very moment when ocean science is just beginning to be introduced in schools around the country through the Next Generation Science Standards is simply tragic. We need it now, more than ever.”

Dena Deck, a marine science consultant in California, also urged Sullivan to keep the program. She told Eos that “this unique program is duplicated nowhere else.  It provides current cutting edge science to interested students, and makes STEM studies attractive and accessible to a wide variety of under-served students who otherwise might never engage in these studies.”

Thirty Years, $500 Million, and a Scientific Mission in the Gulf

UN Report: 2019 Was Likely the Second-Warmest Year in Recorded History