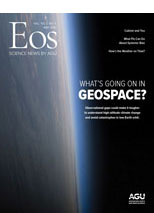 When the sky is dark and the Sun rests just below the horizon, noctilucent clouds appear like ghosts in the polar skies, silvery and translucent. These shimmering wisps, long confined to the coldest reaches of Earth’s atmosphere near the poles, have been steadily creeping toward lower latitudes, lured by fresh seeps of the icy water crystals that feed them.

How and why do these apparitions form, and what can they teach us about the atmospheric realm they come from? To answer these questions, scientists sought a way to conjure a ghost of their own.

“A lot of times, to study this region of the atmosphere observationally, you’re working with what you’ve got,” said Richard Collins, an atmospheric scientist at the University of Alaska Fairbanks. “You’re observing the natural system and putting together what we know about it to determine the various factors that are in play.…Here we are actively experimenting in the system by injecting a known amount of water in a controlled way so that we can actually see what’s happening.”

Earth’s mesosphere, the atmospheric layer 50–80 kilometers above the surface, is home to polar mesospheric clouds (PMCs), also known as noctilucent or night-shining clouds. They are typically seen in Arctic and Antarctic skies during summer months when humidity in the upper atmosphere is high. These clouds form from water ice crystals at the edge of space, where the mesosphere is coldest.

Moreover, human-induced climate change has steadily cooled the mesosphere and thermosphere, making conditions more favorable for noctilucent clouds. Scientists want to better understand how these upper-atmospheric changes will affect the creation of noctilucent clouds and also how these clouds can be used as diagnostic tools to understand the meteorology of this often-invisible part of Earth’s atmosphere.

To do this, Collins and a team of scientists launched a mission called Super Soaker, which sent three sounding rockets into the mesosphere in January 2018 from a facility in Fairbanks. One of the rockets carried a canister filled with 220 kilograms of pure water, which was explosively released 85 kilometers above the surface. The other two rockets, as well as a ground-based lidar system, monitored the meteorological conditions before, during, and after the explosion.

The researchers found that a modestly sized noctilucent cloud formed a mere 18 seconds after the water was released and lasted for a few minutes before dissipating. On the basis of measurements from Super Soaker, cloud formation models indicated that the sharp spike in humidity raised the freezing temperature of water in that spot by about 50°C. The explosive release of water also created meter-sized ice filaments that quickly cooled the air by 25°C and were critical for seeding the cloud’s formation.

“We were surprised that the cloud formed so quickly and that this cooling could be so rapid,” Collins said.

“This is the first time anyone has experimentally demonstrated that PMC formation in the mesosphere is directly linked to cooling by water vapor itself,” Irfan Azeem, chief scientist at Astra, LLC, in Louisville, Colo., and principal investigator of Super Soaker, told NASA. The results of this experiment were published in the Journal of Geophysical Research: Space Physics in February.

Specters of the Future

These specters might haunt the skies at the slightest provocation as the increasing pace of climate change and rocket launches injects ever more water into the upper atmosphere.
“The Super Soaker investigations are a beautiful and very seldom seen example of performing an active experiment in this region for atmospheric conditions which cannot be adequately reproduced in the laboratory,” said Franz-Josef Lübken, an atmospheric scientist at the Leibniz Institute for Atmospheric Physics in Kühlungsborn, Germany. “Such experiments can actively create and control physical conditions in the mesopause region in order to study the formation and behavior of ice clouds in a unique environment and study related science topics such as microphysical processes, transport and photochemistry of water vapor, and effects on the background atmosphere.” Lübken was not involved with this research.

Collins plans for future experiments to test cloud formation triggers by using more water, releasing it in different ways, and measuring the resulting clouds more directly. The artificial cloud’s speedy formation in wintertime, when the air is usually far too dry, suggests that these specters might haunt the skies at the slightest provocation as the increasing pace of climate change and rocket launches injects ever more water into the upper atmosphere.

The Who, What, When, Where, and Why of the Polar Vortex