AGU has been producing books as part of its publications program for over six decades. The goal has been to produce volumes on all topics across the Earth and space sciences that are a valuable resource for researchers, students, and professionals. It is quite a challenge to cover such an enormous scientific space and breadth of audiences. So how have we been doing?

A new Editorial Board for AGU Books was established in 2020. In our first year, we have taken time to look back on our historic backfile of books and evaluate how the program has grown and changed over time. We wanted such data and analysis to shape realistic goals for the books program going forward and focus our outreach to the scientific community for new book ideas. Here we give an overview of all books in our portfolio; a separate piece focuses on books in the space sciences.

Establishment and growth of AGU Books

AGU published its first book in 1956, Volume 1 of the Geophysical Monograph Series (GMS). The GMS remains AGU’s primary and flagship series for scientific work, and is the source of the data presented here, but there are two other active series – Special Publications and the Advanced Textbooks Series – as well as more than a dozen archive series. 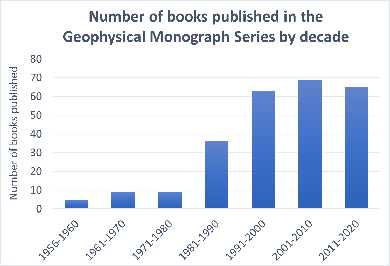 As shown in the chart on the right, fewer than ten books were published per decade during the first three decades.

This rose to more than 60 books per decade during the three most recent decades, an average of 6 to 7 books per year.

To gain further insight, we designated these books into “Earth sciences” or “Space sciences,” the two main branches represented in AGU. This simple division makes sense because there is a significant amount of interdisciplinary research within Earth-related and space-related topics, but far less so across the two. 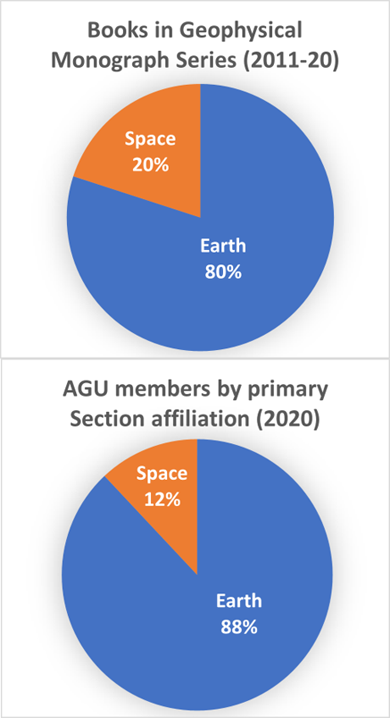 For comparison, we looked at the proportion of AGU members according to their primary Section affiliation as at the end of 2020 (excluding cross-cutting sections such as Education, Science & Society, and Earth & Space Science Informatics) and found that the proportion was 88% (Earth) and 12% (Space).

Of course, this dataset is small and limited, just showing books published in one AGU series; it does not reflect all publications by AGU members, such as journal articles and books published with other publishers.

However, we focus this analysis on the past and future of the Geophysical Monograph Series as we want to ensure that it represents the AGU community and produces books that meet their professional needs.

A closer look at the decadal distribution of books reveals further trends. Earth science started with an average of about one book per year until the 1980s, after which the number steadily rose until the 2010s with an average of six books per year. Currently, we are at about five books per year. However, the actual number of books per year has varied between zero and eleven books. In comparison, the space sciences only started to pick up the publication rate in the 1980s, with its heyday being in the 1990s with an average of two books per year. In recent decades, most years we published at least one space science book per year, with the highest in any single year being four books. (The six volumes that contained both Earth and space topics were counted twice here, once for each branch.)

To go a little deeper, we analyzed books by topic within the “Earth” and “Space” categories. This was not a straightforward exercise, as many books straddle multiple topics (for example, should a book about earthquakes be categorized as seismology or natural hazards?) so we had to make certain choices about best fit for primary topic and ensure consistency in this decision-making process. While such simplistic categorization is a little problematic, the results still reveal some trends in the spread of topics covered. The chart shows the breakdown of topics within the Earth sciences; the accompanying piece delves a little deeper into the “space physics” category.

Looking to the future

We hope to maintain, or even grow, the rate of AGU’s book publications. We are looking for new book ideas and for scientists interested and willing to be volume editors or volume authors. We also want to encourage scientists who have never considered the book format as a way to communicate their science. Find out more about the professional advantages of producing a book and the experience of doing this with AGU and Wiley. Please contact us if you have ideas for new books. The AGU Books Editorial Board is here to help and encourage. Contact a member of the Editorial Board directly or email [email protected].