The Kuroshio Current is one of the major ocean currents. It begins east of the Philippines then flows in a northeastward direction past Taiwan and Japan. It forms the western side of the clockwise North Pacific Ocean gyre. A new book just published by AGU explores the physical, biogeochemical, and ecosystem dynamics of the Kuroshio Current. Here, one of the editors explains what makes this particular ocean current so interesting and what further research is needed to better understand its characteristics and impacts.

What are some of the key characteristics of the Kuroshio Current?

The surface water of the Kuroshio moves rapidly at speeds of around two meters per second, transporting a large amount of heat, salt, organic and inorganic matter from south to north.

The streaks of warm water can be clearly seen in satellite images in spring. The water looks almost transparent because there are no small marine floating organisms; this is because the surface waters of the Kuroshio origin are nutrient poor. Despite the nutrient poor conditions, many pelagic fish species use the Kuroshio region for their spawning and migrations. This is known as the “Kuroshio Paradox.”

How does this ocean current influence life on the Japanese archipelago?

The main physical influence is on the local weather since air temperatures tend to be controlled by heat in ocean surface waters.

Because the Kuroshio Current carries warmer water from south to north, transported heat often induces cloud formations increasing the chance of rain and changing the path of storms.

For example, if the Kuroshio takes a large meander during the winter season, paths of low pressure shift southward near Honshu Island, in turn increasing the chance of snows in Tokyo.

The Kuroshio also has important economic, social, and cultural significance in Japan. The rich waters support a large fishing industry which is significant in a society where fish is the main source of protein in the diet. In addition, many Kuroshio species, such as Skipjack tuna, lobster, and turban shell are offered in traditional ceremonies at shrines.

There is interannual variability in the behavior of the Kuroshio, which has a knock-on effect on nutrient transport and thus biological production and the associated fisheries industry, but the reasons for these connections are still unknown.

Is there an explanation for the “Kuroshio Paradox”?

Recent studies show that the Kuroshio transports a large amount of nutrients in dark subsurface layers from south to north as a nutrient stream.

South of Honshu Island, the Kuroshio Current frequently draws Kuroshio waters into coastal regions. This not only pulls the warm surface waters towards land but also the lower layers of nutrient rich water.

How does the Kuroshio Current affect the climate?

Researchers are still exploring why the Kuroshio Extension and Gulf Stream Extension are the regions of largest net CO2 absorption.

One of the reasons is that the warm waters transported from south to north are cooled as they move to northwards, which increases their ability to absorb CO2.

Another possible explanation is phytoplankton photosynthesis in these regions.

Further research is needed to better understand of the role of the Kuroshio nutrient stream in forming the CO2 sink in order to better predict ocean responses and feedbacks to climate variabilities in future.

What are some of the challenges of studying the Kuroshio Current?

The greatest challenge is to accommodate varieties of scale—both in space and time—at which important physical processes occur.

The greatest challenge is to accommodate varieties of scale, all of which are required for a comprehensive understanding of the physical, biogeochemical and ecosystem dynamics of the Kuroshio.
We can study the Kuroshio on an ocean basin scale covering several thousand kilometers; studies suggest that the current varies on a decadal timescale in response to changes in the atmosphere.

We can study eddies, which span several hundred kilometers; research suggests that these emanate from the Kuroshio on a timescale of weeks to months.

We can also study ocean fronts, which can break into smaller flows on a scale of hundreds to tens of hundreds of meters and timescales as short as days.

In turn, these interact with subsurface ocean waves and trigger microscale turbulence at several tens of meters to millimeters. 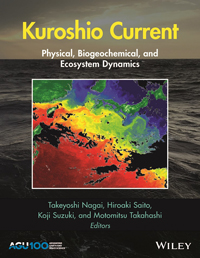 All of these scales are required for a comprehensive understanding of the physical, biogeochemical and ecosystem dynamics of the Kuroshio. However, it is not yet possible to resolve all the scales at the same time both in the observations and in the numerical simulations.

What is certain is that the curious characteristics of the Kuroshio Current will keep scientists busy for many decades to come.

World’s Deepest Freshwater Cave May Be a Kilometer Deep