Postcards from The Field 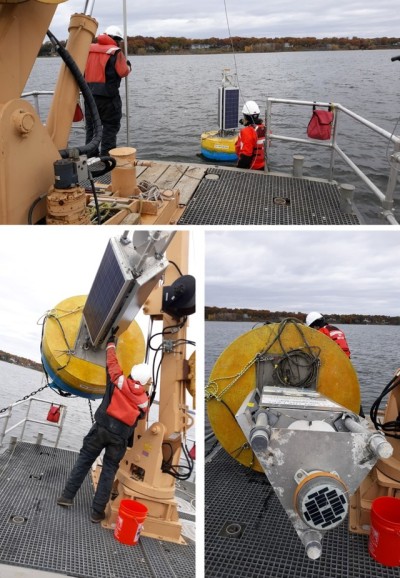 The Muskegon Lake Observatory buoy (MLO; www.gvsu.edu/buoy/) completed a decade of time-series weather and water quality data acquisition in this Great Lakes estuary in 2020 – delayed, but not defeated by the ongoing pandemic. Muskegon Lake is a model urbanized Great Lakes estuary that is impacted by legacy eutrophication, harmful algal blooms, and bottom water hypoxia, and the MLO serves as a sentinel that monitors water quality improvements during ongoing ecosystem restoration. Here, we are on board NOAA­–Great Lakes Environmental Research Laboratory’s R/V 5501 (buoy tender) retrieving the buoy from the lake after its 10th year of operation, assisted by NOAA crew members Beau Breymer, Todd Roetman, and Dan Burlingame. MLO continues to provide valuable long-term, time-series, open-access data (~10 million as of today) on estuarine ecology in the Great Lakes, allowing us to share observations and discoveries that have relevance to natural waters in inland and coastal zones everywhere that are similarly affected by anthropogenic forces and climate change. 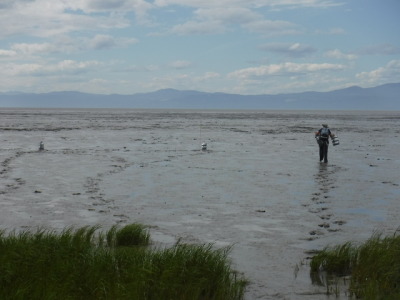 We’re writing from the beautiful salt marsh of La Pocatière, Quebec on the St. Lawrence estuary. We’re measuring greenhouse gas fluxes from different zones of the salt marsh. The picture shows Sophie (a post-doctoral fellow at McGill University and the University of Birmingham, UK) installing gas flux chambers on the mudflat. Between coring, collecting porewater, clipping vegetation, and trying to get it all done before high tide, we are tired! We’re so grateful to be in the field and not stuck at home in lockdown, especially after changing fieldsites and experiments due to COVID-19 restrictions. Good luck to everyone during these trying times wherever you’re working from! 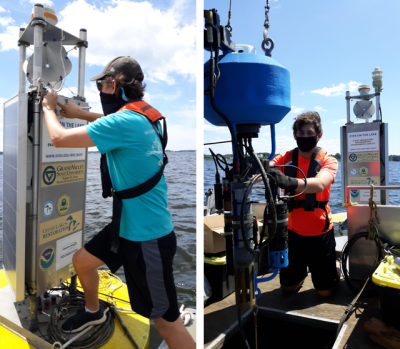 Despite the delay caused by COVID-19-related work restrictions and safety protocols, we were finally able to deploy the Muskegon Lake Observatory buoy (MLO) to gather time-series weather and water quality data in this Great Lakes estuary.  Here, we are making use of an improvised pontoon boat with a winch and a moon pool for docking to the buoy and servicing the infrastructure.  Water Resources technician, Tony Weinke (left), is securing the panel that covers sensitive data loggers on the big yellow buoy that serves as the main work platform, power source, met station  and communication center; and Aquatic Science graduate student, Nate Dugener (right), is working to link the soon to be submerged daughter buoy carrying an array of water-quality sensors (in blue) with the main buoy.  Now in its 10th year of operation, MLO continues to provide valuable long-term time-series open-access data on estuarine ecology in the Great Lakes www.gvsu.edu/buoy/ 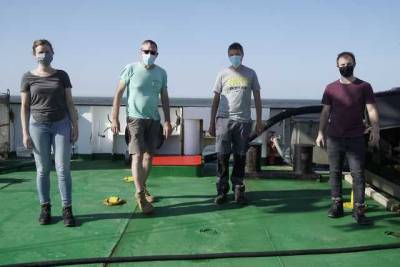 Our first sampling campaign on the RV Belgica after Corona pandemic confinement was from 22-24 June. Although social distancing and wearing of masks remains obligatory, we were able to continue the monitoring of suspended particles and dissolved substances in the Southern Bight of the North Sea. The aim is to understand better the variations on tidal, seasonal and inter-annual scales that occurs due physical forcing (tides, meteorology, climate), biological cycles (algae blooms), biogeochemical processes (carbon and nutrient cycles) and human activities (eutrophication, contaminants, dredging and dumping activities, offshore constructions). The monitoring includes water sampling for the analysis of the total suspended matter, organic suspended matter, chlorophyll and chemical pollutant concentrations and is carried out in three stations located along the cross shore gradient from the high turbid nearshore to the low turbid offshore waters. 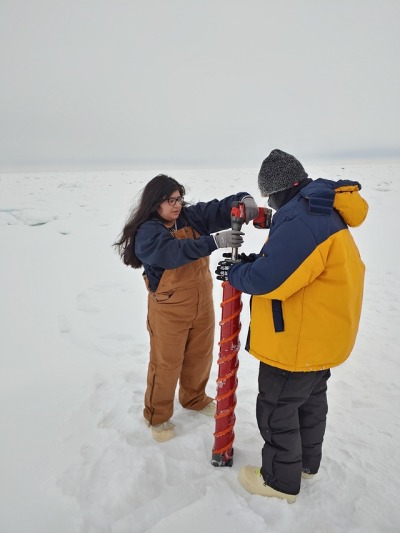 Radford University student researcher Deanna Perales is getting ready to drill into the ice so she can lower her self-made high-sensitivity water pressure sensor into the Chukchi Sea. Her Arduino-controlled sensor will record pressure variations in the seawater (at a rate of 1Hz) to check for correlations between those changes and ice cracking as recorded by another student’s self-made seismic detectors. Her work partner and fellow student Will Nape is steadying the ice corer as she gets ready to start. The day was gray and threatening, with the storm front in the distance behind her looming over our work site. She quickly got her sensor in the water, and collected nearly an hour of data that day before the blizzard chased us off of the ice. We are currently analyzing this and other data to see how tiny ocean pressure changes may correlate with the formation of the ubiquitous ice fissures.

With the experience she gained on this trip, Deanna plans to return to the ice next year with her own improved design, and with the goal of recording data over the course of many days. This work is part of the year-long Arctic Geophysics Research Experience classes, in which students design their own experimental questions, build their own sensors to address that question, and then deploy their work on the arctic sea ice. 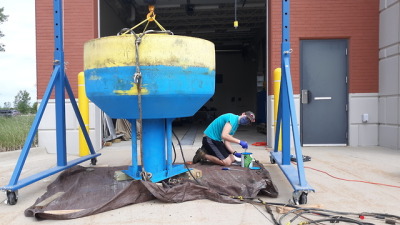 Painting under a pandemic

Ecosystem observatories gather valuable time-series environmental data.  The Covid-19 pandemic has delayed this year’s deployment of a weather and water quality buoy observatory in Muskegon  Lake, an urbanized Great Lakes estuary in Muskegon, Michigan.  Now that we are finally being allowed back into our work places and are able to initiate pending field research projects, we are busy preparing the Muskegon Lake Observatory buoy (MLO) for deployment on the lake.  Here, Water Resources technician, Tony Weinke (wearing a mask, and practicing social distancing with me – his painting partner), is busy applying several coats of an eco-friendly anti-biofouling ablative paint to the buoy to prevent excessive biofouling by mussels and bryozoans.  In the coming days, we hope MLO will be safely deployed and begin to share weather and water quality data online with open access to all.  It will be the 10th year of MLO operations providing long-term data on Great Lakes ecology – including on eutrophication, harmful algal blooms and hypoxia www.gvsu.edu/buoy/ 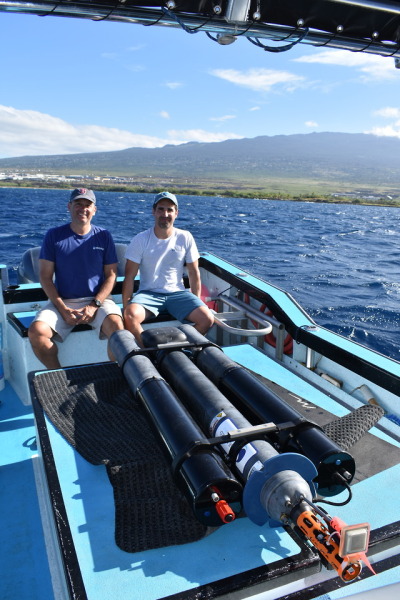 Things have been heating up in Hawaii!  Well, heating up and cooling down to be precise.  Seatrec declared another successful sea trial off the coast of Hawaii with the recovery of a profiling float powered by two SL1 units that harvest energy from the hot and cool temperature differences in the ocean.  This profiling float descended to a depth of over 1000 meters before resurfacing and turning the temperature difference between deep and surface water into electricity.

Dr. David Fratantoni (left) and Michael Zedelmair (right) were happy after a successful deployment and recovery operation sitting on deck of the vessel shown.  Seatrec’s SL1 energy harvesting system can potentially provide 100% of the power needed for a profiling float which are typically powered by batteries, a limitation which necessitates profiling dives coupled with low power consumptive sensor payloads.  The SL1 greatly enhances the capabilities of floats to enable longer lifetime, more frequent sampling, more sensor payloads, and elimination of battery waste when the profiler becomes derelict. 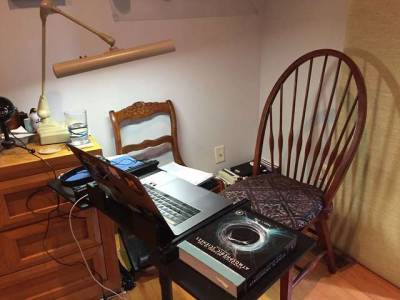 Working from my new “field office” for the last two weeks. I have made myself a cozy nook overlooking a scenic landscape of piles of books, blankets, and boxes. Rather than the occasional hallway chatter about someone’s cool new plot, I hear something even better – my “coworkers” watching “The Big Lebowski” in the next room. Or maybe its “Frozen;” I should listen more closely to figure this out. The fun never ends here with a continual parade of video calls, and I have rediscovered that awesome time-management software, Slack. Did it just notify me, again? I’d better check it! Walking across the “building” to get a coffee is so much easier here than at my on-campus office; oh wait, and is that the dryer buzzing? Sweet! I get to fold laundry! I better have a snack while I’m up, too. No more cheese or bread, so I guess I’m putting the leftover sweet potatoes on Frosted Mini Wheats, now. Okay, back to my field site, for a few more minutes. I’ve got this work-at-home thing down! 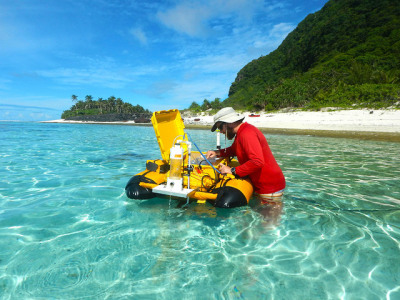 Scientists from the U.S. Geological Survey (USGS) and the National Park of American Samoa (NPSA) are collecting data on Ofu, in the Manua Islands of American Samoa. The 3-year program aims to identify historical trends and current patterns of nutrient loading to NPSA’s Ofu reef flat pools and their impact on coral health.

Coral reefs in NPSA’s Ofu unit are highly diverse, containing more than 80 species of coral, several of which are listed in the U.S. Endangered Species Act (ESA). The corals have been recognized as being tolerant to thermal stress: daily temperatures in the pools frequently exceed the local coral bleaching threshold of 30°C. The corals growing in this unique ecosystem provide important insights into the potential for coral acclimatization and/or adaptation to future climate change.

However, Ofu’s pools are currently threatened by an outbreak of Valonia fastigiata algae. Recent surveys indicate that the outbreak covers>50% of the consolidated seafloor in many of Ofu’s pools, actively overgrowing healthy coral colonies. This overgrowth implies a significant shift in the local nutrient regime towards eutrophication that favors macroalgae proliferation.

Nutrient pollution via surface runoff has been a target for coral-reef conservation; however, nutrient loading to coastal waters from submarine groundwater discharge (SGD), the movement of water from land through the subsurface and into coastal waters, is increasingly recognized as an important vector for transporting nutrients into the coastal ocean. Elevated nutrient loads delivered by SGD may lead to eutrophication and algal blooms, thereby playing an important role in coral reef health. SGD is the dominant source of freshwater to Ofu’s pools, and thus a likely pathway for transporting nutrient loads to the coral reefs that may be driving the algae outbreak.

This photo shows a USGS-developed radon-measuring buoy that enables scientists to trace and volumetrically quantify SGD rates to the coral reefs. The goal is to constrain the SGD-associated nutrient loading, identify the patterns of impact in Ofu’s pools, and halt the continued addition of nutrients to the pools, thus leading to future management decisions to protect the ESA-listed corals. 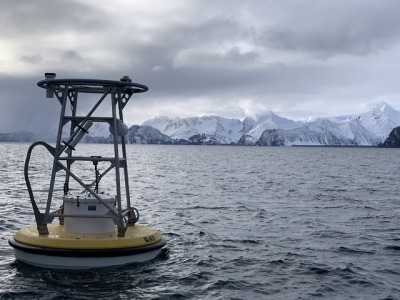 I am GAKOA, a surface mooring measuring ocean acidification in the Gulf of Alaska.  I am cared for by the Ocean Acidification Research Center at the University of Alaska Fairbanks.  During 2020, I will be collecting data for my tenth year!

I am anchored at the mouth of Resurrection Bay, near Seward, Alaska.  My aunt, GAK1, is nearby and is entering her 50th year collecting data!  My sponsors are the Alaska Ocean Observing System, National Oceanic and Atmospheric Administration, National Pacific Research Board, and State of Alaska.

Now that I have freshly calibrated sensors and new batteries, I am ready for spring!

Data Sets Are Foundational to Research. Why Don’t We Cite Them?

Data Sets Are Foundational to Research. Why Don’t We Cite Them?

A Slippery Slope: Could Climate Change Lead to More Landslides?