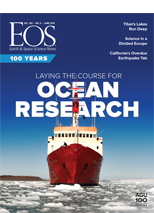 Whales make a wide variety of sounds, including clicks and vocalizations, to interpret their surroundings and communicate with other members of their pods. Since the emergence of acoustic monitoring technology several decades ago, researchers have noted that blue whale songs have steadily decreased in pitch, but the cause of this phenomenon, including whether or not humans may shoulder some of the blame, remains uncertain.

The results indicate the vocalization pitch has steadily decreased in all five whale populations by a few tenths of 1 hertz per year. This finding is consistent with previous studies of Antarctic blue whales but the first documented occurrence of this phenomenon in both fin and Madagascan pygmy blue whales. The authors argue that this trend could reflect increasing whale populations, differences in the ocean’s acoustic properties due to changing environmental factors like ocean acidification, or a combination of both.

Because of the study’s long duration and broad spatial distribution, the team was also able to detect seasonal, up-and-down shifts in the pitch of Antarctic blue whale calls superimposed upon this interannual trend. These intra-annual fluctuations peak during the austral summer and correlate with seasonal fluctuations in ocean noise, particularly the low-frequency sounds emitted by drifting icebergs, a primary source of ambient noise in the southern Indian Ocean. The change in call pitch is believed to be linked to a change in call intensity in response to the seasonal variation of noise level.

The authors’ evidence for both seasonal and interannual changes in the pitch of whale vocalizations and their suggestion that these phenomena may result from different drivers are likely to be of broad interest to the scientific community. This study clearly demonstrates the value of obtaining widespread and long-term acoustic recordings of cetacean calls to determine why they are changing and the importance of interdisciplinary collaboration to effectively collect and process massive data sets and interpret the results. (Journal of Geophysical Research: Oceans, https://doi.org/10.1029/2018JC014352, 2018)

In a Twist, a Greek Volcano Ruled by the Sea

An Iceberg May Have Initiated a Submarine Landslide