In its most recent biennial election, which ended last month, the American Geophysical Union (AGU) membership chose 55 new leaders to serve 2-year terms in 2017–2018. Union officers, Board members, section and focus group officers, and student and early-career representatives to the Council were elected. Here the AGU Governance Committee takes a look back at the voting this year and how 2016 stacked up in comparison to prior elections. 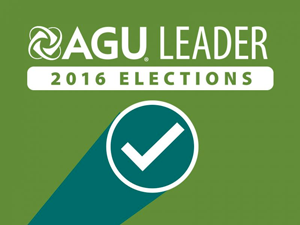 See the accompanying Eos.org article entitled “Bell to Be AGU President-Elect/Leadership Transition Begins” for election results and an overview of the leadership transition that’s now getting started.

Members voted electronically, and access to voting was provided to all eligible voters for a period of 30 days. All members who joined or renewed their membership by 1 August 2016 were eligible to vote in this year’s leadership election.

Survey and Ballot Systems, Inc. (SBS) conducted the voting. SBS, which offers election planning and management services, provided unique login links and other support services for eligible voters throughout the election. On 29 September, the company certified the results, which were then reviewed by the AGU Governance Committee the next day.

The total number of ballots validated in the election was 9517. The number of eligible voters was 45,037, making the participation rate 21.13%. This is almost 5% higher than AGU’s last election in 2014.

The participation rate of 21.13% was almost 5% higher than for AGU’s last election in 2014.
SBS provided all voters the opportunity to rate their satisfaction with the 2016 voting process. In response to this election, 5864 comments were received—more than 9 times the 647 comments received in 2014 and greater than double the previous record response of 2619 comments in 2012. This is a good indication of voter engagement, and 91.1% of voters continue to be satisfied or very satisfied with the voting process. Voters provided many comments and suggestions, which AGU will analyze and discuss over the coming weeks. Voter feedback is very important, and comments received in 2014 were instrumental in helping the Governance Committee plan for the 2016 election.

Getting the Word Out

The election was supported by communication throughout this year. The Governance Committee published the proposed slate in Eos.org on 10 May and the final slate on 18 July. Information about the election was also communicated through AGUniverse and the Meetings Newsletter; both are biweekly electronic newsletters sent to all AGU members and meeting attendees.

A special elections website, including frequently asked questions, was created to aid members with the voting process. Promotion of the election included the AGU home page carousel, Eos print ads, Eos Buzz ads, Facebook, Twitter, and emails. The election vendor sent reminder emails to eligible voters throughout the election, as did section and focus group leaders.

The Governance Committee expresses its gratitude to all candidates and to all AGU members who voted in this very important election.

This Week: The Best of Eos

Machine Learning Can Help Decode Alien Skies—Up to a Point

Geoscience Commits to Racial Justice. Now We’ve Got Work to Do

Machine Learning Can Help Decode Alien Skies—Up to a Point

Geoscience Commits to Racial Justice. Now We’ve Got Work to Do