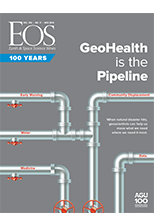 Supporting the practice of science is only half of AGU’s mission statement: “Our purpose is to promote discovery in Earth and space science for the benefit of humanity.” Our membership believes it crucial to see science as more than an end itself—to increase our knowledge of the universe—or as practical advancement of our day-to-day lives. We must also embrace science as a means of continuing our own existence.

“Listen to the scientists” is a now common refrain of the youth climate movement, which fully recognizes that the world is going to change dramatically during the lifetimes of its young activists. They’ll almost certainly suffer more frequent and intense natural hazards and all the associated fallout. The scientists they speak of work across geoscience fields and have started to look more and more at the implications of their research on our lives.

AGU recognized this ever-increasing convergent geoscience that was reporting on natural hazards and other environmental impacts to our health and safety. In 2008, we formed the Natural Hazards focus group. As the number of studies rose in health-related geoscience, AGU responded by launching the GeoHealth journal in 2016. Both the Natural Hazards focus group and the GeoHealth community were formalized into AGU sections in 2017.

This year is the second that geohealth is an official topic at our Fall Meeting, and we believe all of our attendees will find enlightening, forward-looking science in the more than 40 sessions being convened. As we continue to celebrate AGU’s Centennial, this issue of Eos looks at the study of natural hazards and the burgeoning field of geohealth.

The engagement required to install the instruments means that people become personally invested and knowledgeable about the hazards that threaten their communities.
Our cover story describes how scientists are helping communities in Puerto Rico after Hurricane Maria severely damaged the water distribution infrastructure. A team began by testing water quality in neighborhoods around the country and then uploaded that data—along with helpful contextual information such as pipeline damage, power outages, and the availability of food and water aid—to a publicly available online platform called HydroShare. In its second phase, the scientists are training local water managers to share data and use the digital community as a resource to help them care for their neighbors.

Similarly, a group in Haiti is harnessing the power of community to monitor earthquake risk. The country had no seismic network at all before the devastating 2010 earthquake, and the national system set up after has not proved entirely effective. Scientists are turning to a different solution: installing numerous “personal-sized” seismic instruments in houses and small businesses. Not only does the redundancy mean that even small quakes will get recorded if some of the equipment loses power, but the engagement required to install the instruments means that people become personally invested and knowledgeable about the hazards that threaten their communities.

Some truly optimistic news: Scientific innovation is turning some of the most toxic places in the world into environmental cleaning systems. Asbestos mines now sit idle in Canada, closed after the discovery of the material’s disastrous health effects. Now these sites have the potential to pull carbon dioxide out of the air at significant scale.

May we take inspiration from each of the scientists featured in this issue, as well as from pioneer Alexander von Humboldt. We honor him, on the occasion of his 250th birthday, by continuing to use our scientific curiosity and drive to make connections across our fields not just about the way the world works, but the way in which we live in it.