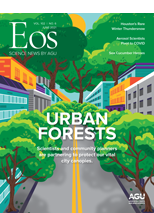 • The Surprising Root of the Massachusetts Fight Against Natural Gas

When asked to imagine Washington, D.C., where AGU is headquartered, people who don’t live here probably think of all our large, marble columns and monuments surrounded by lots and lots of concrete. But running right down the middle of the city is Rock Creek Park, nearly 710 hectares (1,754 acres) of trees, trails, and streams that were designated a national park in 1890. This is an “urban forest” of perhaps the most obvious kind—a beautiful, protected piece of nature in the middle of a city.

These ecosystems are hugely important to city dwellers, but they don’t need to be nearly as large as Rock Creek Park to provide benefits. Single trees planted along a street, small neighborhood parks, and shrubs lining a thoroughfare can have significant impact on human health, local air quality and water systems, and even the economy.

In our June issue of Eos, we look at the growing body of research on this vital city greenery. Courtney L. Peterson and colleagues walk us through the canopies of three U.S. cities—Albuquerque, N.M.; Austin, Texas; and Durango, Colo.—and how local government is starting to work with researchers to better manage and adapt their green spaces. As climate change exacerbates the urban heat island effect, among other issues, protecting local trees and their cooling benefits is essential.

Scientists partnered with local activists and have made real, legislative change that’s not only keeping their streets greener but playing a part in greening the state’s entire energy system.
Cities are, of course, made up of a complex amalgam of privileged and underserved communities, with different levels of access to urban benefits. (Rock Creek Park, which runs through the northern half of the city, is an excellent example; the households in D.C. with the lowest median incomes are in the south and across a river.) If you’re wondering what that has to do with science, read “Growing Equity in City Green Space,” where we report on researchers doing the hard work in communities to create green infrastructure using equity-focused development strategies.

Urban forests also face unique, city-dwelling dangers. In “The Surprising Root of the Massachusetts Fight Against Natural Gas,” we report on trees in Boston that neighborhood residents realized were dying from gas leaks in the pipes under the street. Scientists partnered with local activists and have made real, legislative change that’s not only keeping their streets greener but playing a part in greening the state’s entire energy system.

We’re going to be talking more about scientists’ role in our communities this year—”Science Is Society” is the theme of AGU’s Fall Meeting 2021. Start by reading about Raleigh Martin’s experience as a geoscientist fellow on the Select Committee on the Climate Crisis in the U.S. House of Representatives. You don’t need to roll up to one of D.C.’s marble-columned buildings to be part of effective change though—Martin offers several recommendations for anyone interested in talking to their local policymakers about making good decisions supported by scientific evidence.

Is the weather nice where you are today? If so, I recommend heading outside and finding a lovely tree to read our June issue underneath.