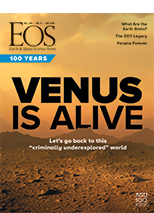 In the chaotic early days of our solar system, catastrophic collisions were common. Jupiter’s fluid surface does not preserve telltale crater scars, nor is it tilted off its axis like some of its neighbors, but a new study published in Nature has uncovered deeper evidence of a massive impact in Jupiter’s past.

Jupiter is a gas giant famous for its sheer size⁠—over 300 times more massive than Earth⁠—and its swirling stormy surface. But until recently, little was known about the planet’s interior. The Juno space probe launched by NASA in 2011 entered Jupiter’s orbit in 2016 and continues to gather data on many aspects of the planet, including Jupiter’s chemical makeup and gravitational and magnetic fields.

The gravitational readings collected so far are “puzzling,” said Andrea Isella, an astronomer at Rice University in Houston and a coauthor on the new study. “We expected Jupiter to have a dense core, but the gravitational readings show that the core is diluted,” he says, meaning that heavier elements common in planetary cores are scattered throughout the hydrogen- and helium-rich envelope that encloses the planet.

Most planets, including Earth, have dense cores made up of heavy elements, like iron, that sink deep into the planet’s interior under the pull of gravity. Even gas giants like Jupiter are thought to initially form as dense, rocky or icy bodies that accumulate thick atmospheres composed of lighter elements, like hydrogen, over time.

Jupiter’s diluted core suggests that a head-on impact with a protoplanet may have stirred up the young planet’s core early in its history, Isella said. “Before the impact, it may have had a very dense core, surrounded by atmosphere. Then a head-on impact spread things out, diluting the core.”.

To investigate the probabilities and potential outcomes of a large impactor colliding with Jupiter, lead author Shang-Fei Liu of Sun Yat-sen University in Guangzhou, China, and colleagues ran thousands of computer simulations of different types of impacts. The simulations showed at least a 40% chance that Jupiter would have collided with another planet within a few million years after its initial formation around 4.5 billion years ago, soon after the dawn of our solar system.

In 1994, the Shoemaker-Levy 9 comet collided with Jupiter, giving scientists a rare opportunity to observe two major objects in the solar system colliding.

Because of the strong gravitational focusing generated by the massive planet, passing objects are more likely to collide head-on with Jupiter than graze by, Isella said. The simulations showed that collision with a rocky planet about 10 times the size of Earth with a dense core rich in heavy elements could have created enough energy to scatter and dilute Jupiter’s core for billions of years.

A large-impact scenario for Jupiter has not been considered before, said Tristan Guillot, an astrophysicist at Côte d’Azur University in France who was not involved in the new study. “Jupiter does not show outward signs of impact, such as being tilted off its axis, such as we see with Saturn, Uranus, and Neptune.”

“This new study nicely explains the unexpected observations made by the Juno mission.”
But it makes sense given what we know about the evolutionary history of our solar system, he said. “The early solar system was a very different beast with many large planetary embryos flying around. The potential for large impacts was likely much higher,” said Guillot, who penned an accompanying News and Views commentary in the same issue of Nature.

“This new study nicely explains the unexpected observations made by the Juno mission,” Guillot said.

More work will be needed to fit the impact theory into existing models of planetary formation, accounting for the distribution and accumulation of elements and heat in young planets, Guillot said. “This is very promising work that may lead us into a new paradigm for how the solar system might have formed: quite chaotically, with lots of giant impacts.”

The Space Dust That Causes Zodiacal Light Might Come from Mars