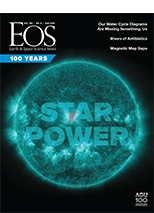 In 1972, during the waning years of the Vietnam War, U.S. military pilots flying south of Haiphong harbor in North Vietnam saw something unexpected. Without explanation and without warning, over two dozen sea mines suddenly exploded.

Although the phenomenon was never officially explained, it piqued the interest of geospace scientist Delores Knipp.

Knipp is a research faculty member at the Ann and H. J. Smead Aerospace Engineering Sciences Department at the University of Colorado Boulder and editor in chief of the AGU journal Space Weather.

She originally wanted to be a meteorologist and joined the Air Force Reserve Officer Training Corps in college with the goal of staying in the military for 4 years to pay off her student loans. Twenty-two years later, she retired after a career with the Air Force studying weather and space weather.

Being a scientist in the Air Force presented Knipp with some unique opportunities to educate her colleagues, specifically answering questions like “What is dark?” It might sound silly, but it’s a big deal when determining flight schedules.

But Knipp really started diving into some of the more mysterious stuff after she retired.

In this Centennial episode of Third Pod from the Sun, Knipp provides a unique perspective about the role of space weather in shaping global policy and conflicts. From a chance phone call from a colleague encouraging her to solve a decades-old mystery to discovering clues in the obituary of an Air Force commander, Knipp unravels some of the biggest space weather mysteries that many of us have never heard of.

This episode was produced by Shane M. Hanlon and mixed by Collin Warren.