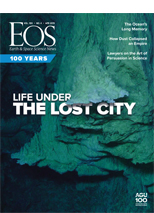 Forty-two centuries ago, the flourishing Akkadian Empire—spread across modern-day Iraq, Turkey, and Syria—suddenly disappeared. Paleoclimatologists and other geoscientists now have one possible explanation for why. Using precisely age dated chemical measurements from a stalagmite collected in a cave in Iran, researchers found an abrupt uptick in dust at that point in history. This heightened dust activity, which persisted for 300 years, might have made for uncomfortable living conditions and difficulties in farming, the researchers suggest.

Archaeologists have long been baffled by the abrupt abandonment of northern Mesopotamian settlements roughly 4,200 years ago. “There’s this specific point in time where everything just disappears [from the archaeological record],” said Stacy Carolin, a paleoclimatologist who led this research while at Oxford University in the United Kingdom and is currently at the University of Innsbruck in Austria. Sediment cores obtained from the Gulf of Oman have suggested that increased dust activity in Mesopotamia might have been the culprit, but the imprecise ages of marine records make it difficult to definitively link the geophysical and archaeological evidence, said Carolin. “Unless you know the exact timing…you can’t say anything about a cause and effect relationship.”

Carolin and her colleagues—including geochemists and members of the Iranian Cave and Speleology Association and the Geological Survey of Iran—have now analyzed the chemical composition of an 18-centimeter-long, semitranslucent stalagmite from Gol-e-Zard (Yellow Flower) cave near Tehran to look for signatures of dust. Because stalagmites slowly build up over time as dissolved minerals percolate through rock and drip from cave ceilings, they’re like clocks recording local environmental conditions. Using uranium-thorium radiogenic age dating, Carolin and her team found that their stalagmite started growing about 5,200 years ago. The researchers estimated an age uncertainty of 31 years for their measurements, far more precise than the centennial-scale resolution of other studies.

Carolin and her collaborators found an uptick in magnesium, a component of dust, in the stalagmite beginning 4,260 years ago (in a twist of geophysical convention, all dates are referenced as years before 1950). This dust likely derived from the alluvial plains of the Tigris and Euphrates Rivers—that is, the location of the Akkadian Empire—and was transported by prevailing winds, the researchers suggest. High levels of dust might have caused the Akkadian Empire settlements to be abandoned, the team concluded. “Dry, arid conditions could have been detrimental to agricultural settlements,” said Carolin. “The dustiness may have made living conditions unbearable as well.”

Other researchers are supportive of a real cause and effect correlation, however. This work “provides another line of evidence supporting the idea of a link between climate variability and societal change,” said Matthew Lachniet, a paleoclimatologist at the University of Nevada, Las Vegas, not involved in the research.

Carolin is currently analyzing other Iranian stalagmite samples that afford a deeper look into the past. She and her colleagues are looking at climate change over ice age cycles on the timescale of centuries. “We are interested in reconstructing the climate state of this region…when our human ancestors were migrating out of Africa and into Asia through southern Iran.”