A crustal magmatic system is a portion of the oceanic and continental crust through which magmas ascend, stagnate, and evolve before erupting at surface. Earth scientists are not able to easily access the crust, but plutonic and volcanic rocks exposed at the surface provide valuable scientific information on the magmatic processes and are able to model how they form and shape our crust.

Crustal Magmatic System Evolution: Anatomy, Architecture, and Physico-Chemical Processes, a new book recently published in AGU’s Geophysical Monograph Series, presents a comprehensive overview of the spatiotemporal variations in crustal magmatic systems by comparing and integrating analytical, experimental, and numerical approaches. We asked the book’s editors some questions the study of crustal magmatic systems and what readers can expect from this volume.

What motivated you to write a book on crustal magmatic systems?

All of us editors are interested in crustal processes but are working from different scientific perspectives. We realized that there was no comprehensive volume that combined experimental, geochemical, and modelling approaches applied to crustal magmatic systems. A few years ago we organized a session at the Goldschmidt conference where there were some really high quality scientific contributions. That motivated us to pull together a synthesis of research in this field.

What different methods and techniques can be used to study crustal magmatic processes?

The contributions in this volume use three main techniques to investigate crustal magmatic processes. First, analyzing rock samples for their physical characteristics and geochemical composition, reveals the physical and chemical conditions under which magmas are generated and evolve. Second, laboratory experiments on rock samples allow to test their response to different temperatures and pressures, representative for the different tectonic environments in which they may have formed. Finally, modeling studies are used to work out the architecture of volcanic plumbing systems.

Why is it important to focus on timescales when studying magmatic processes?

Magmatic processes act on timescales that range from seconds (such as crystal and vesicle nucleation) to millions of years (such as magma solidification at crustal depths).

These timescales are preserved in igneous rock samples revealed by the compositional variability in minerals and can be used for quantifying magma dynamics in the crust and predicting the temporal variability of the surface expression of active magmatic systems feeding volcanic eruptions.

What examples of crustal magmatic systems from around the world are featured in your book? What makes them particularly interesting to study?

We have examples from major types of magmatism observed on the Earth’s surface. These include volcanoes that form in intraplate settings, such as Hawaii and Cape Verde, and subduction-related magmatic settings, such as Stromboli. All these geological areas are well-known examples of high-risk, and active volcanoes and regularly used examples when teaching igneous petrology.

What would you like readers to take away from your book? 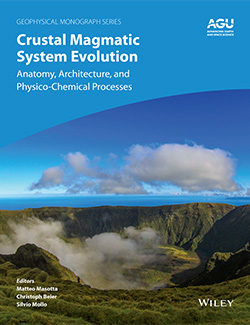 We offer a 360-degree view of what crustal magmatic systems are and how they work. Our integrated approach shows how magmas and their host minerals are generated at depth and, subsequently, differentiate within the crust encountered in different tectonic environments.

However, there are still many things that are poorly or barely understood so we hope to show readers that crustal magmatic systems are exciting objects to study and that many processes need further investigation. We would like our book to act as an inspiring source for future new research on magmatic systems and encourage the combining of different techniques.