Geology is, in essence, the history of the Earth, and any history depends on dates and rates.  Geochronology supplies these. A new book, Geochronology and Thermochronology, recently published by the American Geophysical Union, presents the current state of this science including its concepts, approaches, methods, and applications. Here, the authors answer some questions about the science of geochronology and its relevance, and describe how this field has evolved.

What is the role of geochronology in Earth and planetary sciences?

The Earth and planetary sciences are fundamentally interwoven with the importance of time. Understanding the basic workings of our Solar System requires knowledge of the evolution of the constituent planets and their interactions. This in turn requires sequencing events far back in time, orders of magnitude beyond the scope of human history.

Geochronology expressly fills this need, often providing the key to causality hypotheses linking various phenomena in the distant prehistoric past. Many basic discoveries, from the theory of plate tectonics to the antiquity of our own species, were made possible by geochronology.

Such discoveries are ongoing, as geochronology plays a key role in, for example, linking major extinctions of Earth’s biota to large meteoroid impacts and massive volcanic episodes. In such cases, causality requires temporal coincidence, which is what geochronology can establish (or refute).

Ultimately, understanding the mechanisms and rates of various modes of planetary evolution enable humankind to better anticipate future events affecting our planet and beyond.

What are some examples of the application of geochronology?

Want to know when the Solar System formed? Uranium-lead ages for the first mineral grains to condense from the hot gases surrounding the proto-Sun date that event at 4.5675 billion years ago. Want more resolution on this time? The 700,000-year half-life for radioactive decay of 26-aluminum to 26-magnesium can provide relative ages with precision of tens of thousands of years for events occurring close to the time of Solar System formation.

Want to know when Earth’s core formed? The 9-million-year half-life for decay of 182-hafnium to 182-tungsten dates that event to within the first 30-100 million years of Solar System history, depending on the duration and mechanism of core formation. Want to know what’s the oldest mineral found on Earth? Grains of the mineral zircon from sediments in western Australia have been dated using uranium-lead to 4.37 billion years.

Want to know the rate of sedimentation in a Precambrian sedimentary basin? Either zircon uranium-lead or rhenium-osmium can provide the answer, depending on the type of sediment. Want to know the rate of biological evolution? A variety of geochronologic methods now place precise absolute dates on the boundaries of the geologic time scale that historically were marked by the appearance or disappearance of certain types of fossils.

Want to know where the magmas erupted from volcanoes come from? Uranium-series dating tells us their sources, ascent rates, and residence times in magma chambers.

Want to know the uplift or erosion rate of a terrane? Uranium-helium in apatite can date the time when a rock cooled below 60 degrees Celsius, and cosmogenic nuclides created by the impact of cosmic rays on surface materials can be used to determine the rates of removal of surface layers from rocks or sediments.

What is the specific focus of thermochronology?

Thermochronology is a type of geochronology based on the fact that, in some minerals, some daughter products produced by radioactive decay are not fully retained in crystals until these crystals have cooled to low temperatures. The “closure temperature” at which this full retention starts depends on the decay system (for example, uranium to lead, potassium to argon, etc.), and the type of mineral. Examples include the uranium-lead system in titanite, the potassium-argon system in biotite mica, and the uranium-helium system in apatite, which have closure temperatures of about 600, 300, and 60 degrees Celsius, respectively. If we measure ages of these minerals/systems in the same rock, we can map out the time-temperature path (thermal history) of a rock.

This is useful for many applications, including understanding when and how fast rocks get to Earth’s surface by faulting or erosion during mountain-building, when metamorphism deep in the crust occurs, or when surficial events like meteorite impacts or wildfires occurred in the past.

How has discipline of geochronology developed and advanced over the last century?

Geochronology in its nascent years was mainly the playground of physicists using homemade instruments and methods. Today, the field is mainly populated by geoscientists using commercially available equipment and common protocols to analyze rocks and other materials.

Progress in geochronology has evolved along several interrelated tracks in the last century. The most fundamental is conceptual, beginning with the discovery of radioactivity, which allowed sequences of events and roughly estimated times to be quantified. Remarkably, this enabled rudimentary geochronology (and actually foreshadowed thermochronology) even before the discovery of the neutron, which in turn led to the recognition of isotopes and major conceptual refinements in the field as well as analytical methods such as mass spectrometry.

Another major area of progress has been technical, notably accelerated by the invention of mass spectrometers that have undergone continuous refinement in terms of stability, sensitivity, and throughput over the past half-century. These technical developments have enabled increasingly large quantities of data, of increasingly better quality from ever-smaller samples, to be obtained.

A third avenue of progress, driven in part by the burgeoning data quality and volume occasioned by technical advances such as process automation, has been in data analysis and calibration. Our knowledge of radioisotopes’ half-lives is now in many cases the accuracy-limiting step in geochronology, and new measurements are ongoing to further improve this situation.

Also ongoing are developments of numerical techniques for translating isotope measurements into ages and meaningful uncertainties in these ages. Measurements of diffusion parameters needed for thermochronology, and of cosmogenic production rates needed for cosmogenic nuclide dating, have dramatically strengthened these applications and are undergoing continuous refinement today.

What are some of the most exciting new techniques in the field?

Refinements in uranium-lead dating of zircon can date crystallization ages to better than 0.01%.  Similar precision can be obtained with modern argon-argon techniques on young volcanic rocks.

The use of a number of radioactive isotopes that were present when the Solar System formed, but have half-lives much shorter than the age of the Earth, now allow precise resolution of the events that were occurring in the first five million years or so of Solar System history when the planets, including Earth, formed.

While once abandoned as “leaky” geochronometers, the accumulation of helium from uranium and thorium decay has been turned into a versatile thermochronometer that can be used to measure the timing and rates of cooling of rocks to temperatures close to the Earth’s surface.

The use of cosmogenic isotopes, those generated by interaction of Earth’s surface with cosmic rays, allows wide ranging applications from archeology, to paleoseismology, to studies of landscape evolution. 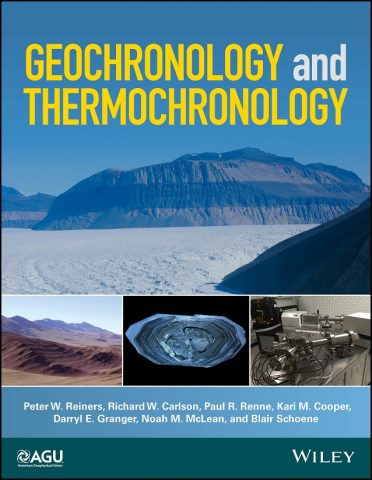 Another technique experiencing exciting growth is dating nucleogenic neon, which forms as a by-product of uranium and thorium decay, and is opening up opportunities for dating minerals including some types of hydrothermal ores that have been difficult or impossible to date by other means.

Geochronology and thermochronology are dynamic fields whose capabilities and range of applications will continue to expand for the foreseeable future.

Japan Puts Its Mark on Geologic Time with the Chibanian Age