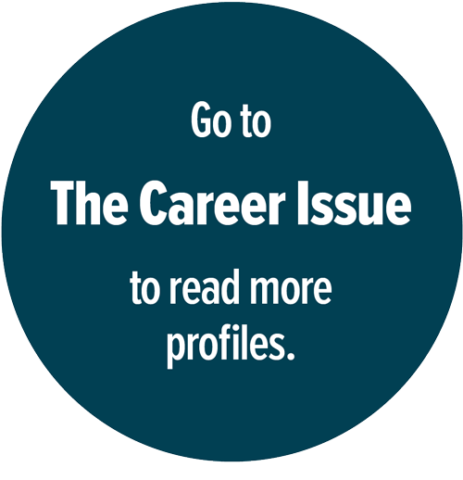 Rebecca Charbonneau is a Cuban American historian who recently earned a Ph.D. from the University of Cambridge researching the history and philosophy of science. She is also a Gates Scholar who has studied, among other things, settler and colonialist science, the search for extraterrestrial intelligence, and Soviet and Cold War rocket and space science.

Before she earned her master of science from the University of Oxford, however, Charbonneau was an astronomy major at Mount Holyoke College in Massachusetts. After leaving Mount Holyoke for personal reasons, she ended up at Rollins College in Winter Park, Fla., to be near family. There Charbonneau double majored in art history and critical media and cultural studies (“like sociology, but with applied elements”) and double minored in sexuality, women’s, and gender studies and English.

Charbonneau said that having a varied undergraduate background in liberal arts is something she brought to her graduate studies of science: “A lot of the contemporary challenges that exist in the sciences, especially the space sciences today, have historical roots.”

“Scientific fields tend to take objectivity for granted,” she said, explaining that “[scientists] often don’t realize how they have inherited a lot of their ways of thinking.” Charbonneau has continued to unpack these ways of thinking with stops at the National Radio Astronomy Observatory and the Whipple Library at Cambridge’s Department of History and Philosophy of Science, as well as at NASA’s History Office. Since last fall, she has been at the Harvard & Smithsonian Center for Astrophysics as their historian-in-residence.

“I was incredibly intimidated when I started entering spaces like Oxford, Cambridge, NASA,” Charbonneau said. “There are pieces of dust in there that are older than me and have seen more of history that I have even studied.… I think that we build up these places as larger than life, and that prevents us from seeing how we belong in those places.… If I had managed to learn that earlier, I might have gotten to the place that I am more quickly.”

Charbonneau identified two mentors who helped her overcome some initial intimidation. “Two people from Rollins were incredibly influential to me: Kim Dennis and Mackenzie Moon Ryan. Having women professors and academic role models was really valuable in helping me see that I could attain this. And this was especially valuable because my field of history of science, especially history of physics and astronomy, is really male dominated.”

Her identity as a Cuban American helped contextualize Charbonneau’s academic interests. In particular, she is interested in “giving voices to people in history who haven’t had their voices acknowledged. I mean communities that have been affected by colonialism, but I also mean people who have not been able to enter the historical record for a variety of reasons.”

“I’m actually really proud of the work I’ve done in Russia, for example. Because of the Putin administration’s crackdown on access to records, it’s really, really hard to do history of Soviet science. And because of that, there’s this image that there weren’t a lot of contributions from the Soviet astronomers, the Russian astronomers. Part of what I’ve done is a lot of oral history interviews where I’ve gone over and I’ve spoken to people and tried to record their stories. It’s really a beautiful thing for me to be able to preserve these people’s voices.”