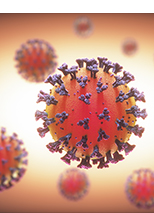 Last December, the outbreak of COVID-19 started as a localized event but quickly spread globally because of lapses in surveillance and preparedness. In this sense, the current pandemic reflects many disasters—such as the oil well blowout on Deepwater Horizon and the aftermath of the 2011 Tohoku earthquake and tsunami—which typically begin as singular events of limited harm but through a cascade of human and systemic errors end up having catastrophic impacts.

This pandemic is not the first and likely won’t be the last—Peter Daszak, an expert in disease ecology, has been warning us for years about zoonotic disease origination and the environmental pressures that cause viruses to leap into the human population. His contributions have greatly informed the discussion around how to stop the next SARS-CoV-2 (the virus that causes the COVID-19 disease) from emerging from the forests and rampaging the globe. Daszak is also one of the founding members of AGU’s journal GeoHealth (of which I am currently the editor in chief). Geoscientists have significant experience in disaster preparedness and disaster response, and a growing new community has been harnessing these skills in tandem with those of medical professionals, engineers, and social scientists to improve responses to events that have health, economic, and social impacts, including extreme events like pandemics.

The geohealth field emerged from the distinctive experiences of geoscientists who have collaborated broadly across disciplines to understand interactions between environmental processes and human health. Atmospheric chemist Mario Molina was part of the Nobel Prize–winning team that documented the links between chlorofluorocarbons (CFCs) and polar stratospheric ozone decline, leading to the Montreal Protocol and the international ban on CFCs. After accurately calculating the age of Earth from lead isotopes, geochemist Clair Patterson identified leaded gasoline as the main culprit of childhood lead poisoning and worked tirelessly and successfully to ban lead additives from fuel. Microbiologist Rita Colwell, the founding editor of GeoHealth, deconstructed the environment-disease interactions that drove cholera outbreaks and spearheaded low-cost local techniques to reduce cholera in drinking water. (Colwell was also the first woman to be named director of the National Science Foundation.) The geohealth community aims to bridge gaps between geosciences and health sciences and define a role for itself in breaking the cycle of disasters made worse through preventable human missteps.

A recent report noted the critical importance of involving scientists along with health professionals in crisis training exercises that would, ideally, make sure risk data are included in the creation of disaster plans.
One key geohealth lesson we’ve learned again and again from disasters is the necessity for protections and adequate supplies for first responders. The Deepwater Horizon oil spill in the Gulf of Mexico killed 11 workers on the drilling platform immediately and went on to cause a generation of harm to the environment and to human health. The first responders to the spill were exposed to high quantities of very reactive and dangerous fresh hydrocarbons (these become somewhat more benign as they mature in the marine environment). A lack of adequate personal protective equipment (PPE) on-site combined with poor understanding of those health risks and the urgency of mitigating the disaster led to severe skin and breathing exposures for many first responders, along with prolonged illnesses that persisted for years.

The failure to learn from and implement changes based on this lesson is a tough one to see playing out again now with the shortages of testing kits, medical supplies, and PPE to help slow the spread of COVID-19. Similar to the Deepwater hydrocarbons, the virulence of SARS-CoV-2 was poorly understood at the outset of the pandemic, leading to early infections in health workers. No matter our level of understanding, first responders are always at higher risk of exposures to environmental hazards and viral pathogens. A recent report by Colwell and human ecologist Gary Machlis for the American Academy of Arts and Sciences noted the critical importance of involving scientists along with health professionals in crisis training exercises that would, ideally, make sure risk data are included in the creation of disaster plans.

The outcomes from the Deepwater Horizon disaster would have been markedly different if knowledge of the dangers of fresh hydrocarbons had bolstered PPE use and ensured that redundant mitigation equipment had been present. Similarly, if governments outside of China had involved scientists in national planning from the start, they would have been more aware of the potential for logarithmic growth in disease spread and thus of the need to produce and stockpile PPE for first responders, even if better quarantine procedures from the start meant they would not ultimately be needed.

The Tohoku event helped to catalyze the geohealth community to develop better early-warning systems for seismic hazards as well as tsunamis.
Another lesson the geohealth community stresses is the need for adequate and accurate warning systems. For example, Japan has in place some of the most advanced construction standards for mitigating earthquake shaking, as well as widespread early-warning systems. Then the M9.1 earthquake centered at Tohoku shook the region in 2011. The earthquake early-warning system functioned well, but the safe zones and seawalls were designed and built to handle only inundations from tsunamis consistent with typical earthquakes in the region, not for a worst-case scenario event. Yet the 2011 tsunami was massive, with waves ranging from 10 to 40 meters high approaching at speeds of up to 700 kilometers per hour. The protective systems failed, and tens of thousands of people died. Scientists now know that an event like this is consistent with the paleorecord of tsunamic deposits in the region and could have been predicted and planned for.

The Tohoku event, along with the 2004 earthquake and tsunami at Sumatra, Indonesia, helped to catalyze the geohealth community to develop better early-warning systems for seismic hazards as well as tsunamis. These tools capitalize on mobile technologies to give real-time warnings, thus saving lives. In the context of COVID-19, early warning means having test kits available. The logarithmic growth prediction coupled with rapid vector transport via air travel should have led to massive production and distribution of tests so that we could pinpoint and isolate emerging hot spots. The assumption that the spread of this disease would fizzle before becoming globally widespread, as the SARS outbreak did in 2003–2004, is akin to that about the size of potential tsunami events prior to Tohoku—and it’s an assumption that has resulted in the pandemic we see today.

Finally, risk messaging has to be sound and consistent throughout a disaster. As geohealth experts have recognized from the Deepwater Horizon and Tohoku events, stress and anxiety during disasters drive a host of short- and long-term pathologies that extend to physical health. The key to mitigating these effects is to analyze the progress of a disaster using sound science and provide science-informed recommendations to citizens so that they are—and feel—prepared.

The geohealth community is already mobilizing to understand COVID-19 dynamics and its secondary impact on health and environment.
When the Tohoku tsunami led to the meltdown of several reactor cores at the Fukushima Daiichi Nuclear Power Plant, the messaging about health impacts of the resulting radiation hazards was inconsistent, inaccurate, and purposefully optimistic. The immediate monitoring performed to assess the amount and distribution dynamics of radiation released, which are influenced by topography and atmospheric circulation, was not nearly sufficient. And the regulatory agencies responsible for the assessments simply drew concentric circles around the release site representing varying risk levels. It was not until a loose coalition of citizen scientists took up the task that there was any documentation of the highly variable radiation distribution across the region. Meanwhile, the regulatory agencies first downplayed the risks, then provided inconsistent enforcement of no-travel radiation zones that were not science based and that changed daily.

Research on the societal stress this poor messaging caused has led to new approaches to engaging communities in risk messaging. These are lessons we should be executing today. We know enough about viral dynamics and pandemic spread to accurately and consistently inform the public about infection avoidance and risk. Using the geohealth community’s approach to messaging would help relieve public anxiety while still containing the outbreak.

The Deepwater Horizon and Tohoku events are examples of experiences from which the geohealth community has learned to better plan for and respond to disasters and to better inform communities, cities, and governments about best practices. Our community is already mobilizing to understand COVID-19 dynamics and its secondary impact on health and environment. Geohealth researchers are dedicated to documenting links between infectious disease, climate, human migration, risk communication, and system responses—lessons learned from making these links can help efforts to handle early stages of a disaster and keep it from growing. Even amid a pandemic, it’s not too late to start adopting these lessons and, we hope, to avoid a next time.

Making the Most of Volcanic Eruption Responses