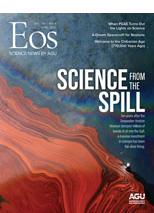 Lauren Alexander Augustine is the executive director of the Gulf Research Program (GRP) at the National Academies of Sciences, Engineering, and Medicine. The GRP was established with settlement funds from the criminal case against the companies involved with the Deepwater Horizon explosion and oil spill. The program has a 30-year framework and is dedicated to enhancing offshore energy safety, environmental protection and stewardship, human health, and community resilience. Augustine, an engineer and environmental scientist with extensive experience in mitigating the impacts of natural disasters, took over the leadership role in 2019.

One of the largest coordinated science programs of its kind, GRP has now been in operation for 5 years. As we approach the 10-year anniversary of the Deepwater Horizon disaster, Heather Goss from Eos spoke with Augustine about the progress GRP has made and what the plans are for the next 2.5 decades.

Eos: How did the Gulf Research Project get started?

Justice ended up giving us $500 million out of that criminal settlement law with BP and Transocean, plus any interest that accrues on that, and gave us up to 30 years to spend all of it.

The Gulf Research Program was formed out of that, to bring the weight of science and engineering and medicine to do good things, to enhance offshore oil safety, to enhance environmental protection, and enhance human health in the Gulf of Mexico and on the Outer Continental Shelf of the United States. In the first 5 years, GRP has given over $80 million to around 130 research grants.

Eos: Tell me about your background and how you came to be leading GRP.

Augustine: I’ve been at the National Academies for about 16 years, and I’ve done a lot of different things here. I’m a physical hydrologist by training, and I have done a lot of work related to flooding. Most recently, I was in charge of the natural disaster risk and resilience program here at the academy, a program that I kind of created from scratch from a report about disaster resilience. We took scientific advice from this report and used it in places around the country, in Charleston, South Carolina, in Tulsa, Oklahoma, and in Iowa and Seattle. We took the approach of fostering direct engagement with stakeholders and decision-makers at the community level.

Eos: What’s an example of what this bigger framework has allowed you to do?

Augustine: One is the Offshore Situation Room, a series of serious games that brings together a diverse set of people who would be interested in or actually called into action during an offshore event. At the end of two and a half days of interactive games and this workshop environment, this group will come up with a set of questions that collectively need to be addressed to get at this enhanced offshore safety environment, this enhanced natural environmental protection, and better outcomes for people and communities. [Note: The Offshore Situation Room was scheduled for March but has been postponed.]

Many people feel they would have a role in an offshore environmental event, but we are not really sure what other people’s roles are. One of the things that came out of the Deepwater Horizon event and the billions in settlements is that it spawned a kind of Deepwater Horizon economy, including GRP, GoMRI [Gulf of Mexico Research Initiative], [the Gulf Coast Ecosystem] Restoration Council, and all these new organizations that didn’t exist before.

If there were another event, would the GRP have a role? Maybe. We would think we would. But we don’t have a regulatory role. We don’t have a response role. Would we get in the way of people cleaning up oil? The Offshore Situation Room is to bring that broader, really diverse community together: industry and government and academia and communities and NGOs [nongovernmental organizations]. The aim is for people to see themselves in the solution.

Eos: Do you see any parallels with what’s going on right now with coronavirus and the way that the government and communities are reacting? Is the Offshore Situation Room something that could be used in other disaster spaces as well?

Augustine: Absolutely. I think it’s a really good question because here is an event, the coronavirus, COVID-19, and it started and it seemed kind of small, or it certainly seemed far away, right? And then it wasn’t so far away. And then it wasn’t so small. And then it had all these ripple effects, and that’s not that different from a big other kind of event.

Since we’re going to delay the Offshore Situation Room, we would be foolish not to draw some lessons from this very current experience. In times of crisis, in times of national emergencies, the federal agencies take an all-hands approach. Even before we postponed the event, we started getting some messages from our federal friends saying, “We’re being pulled into this virus thing.”

Eos: What’s another example of a particularly interesting GRP project?

Augustine: There’s one that’s called Stones Metocean Observatory Project. It’s a really novel collaboration between industry and research. When you have an offshore rig, it has to be moored with these really deep pilings 3,000, 4,000 feet into the water. Shell has this Stones Deep-Water Project and agreed to let our GRP research grantees put sensors and data collecting devices along the depth of the moorings, and they found sonics of sperm whales. While the occurrence of sperm whale vocalizations at the Stones Mooring location was not surprising, this is the first evidence of a continuous presence of this species in the deep waters of the Gulf.

Eos: Can you tell me more about how GRP works with the Gulf communities?

Augustine: One example is a series of grants around building Thriving Communities, which focuses on understanding Gulf communities. Whether it’s the Houma Nation in Louisiana or the fishing communities on the coast of Alabama, our work is about understanding the resilience and the health issues of these places and their people and how they’re changing. That work is done locally, with a lot of community engagement, and it gives a colorful view of the richness of the tapestry of life, health, and economy of the communities of the Gulf.

Eos: In 10 years where do you hope to see the GRP? What do you hope that it has affected and changed in that time?

Augustine: Ten years from now will be the program’s midpoint, and what I would like to see is that we really made some strides in how science is done and how science can affect change. As we set out our strategic plan, we had these four guiding principles. One is to advance the science. If we’re not doing that, we really missed the mark.

Second, science is often done in these silos. The GRP can really open that up and encourage relationships and partnerships with the National Academies—which is novel for us, too—but also to foster and nurture partnerships with other people. It would be great if we can play matchmaker and bring other people together to do good work.

We should have a really good story to tell [about] how the Gulf and its communities are evolving, growing, and hopefully becoming safe, resilient places.
The third one is really important to me: How do we translate the science into action? So what, there are sperm whales in the Gulf of Mexico. What can we do with that information? Well, that might change conservation, that might change shipping routes. Ten years from now, I’d like to see the GRP really well suited to build on what we’ve learned and bridge that knowledge to an impact that makes a positive difference.

The last one is monitoring. We have 30 years, and so we need to pay attention to the changes—there’s sea level rise, there’s climate change, there’s frequency of storms. Over the next few decades there could also be major points of inflection, like the coronavirus, that may result in measurable shifts in health, economy, or communities. Who knows, right? So the last one is about really monitoring and documenting some of the key markers of change and progress over the 30 years of the GRP.

By the end, we should have a really good story to tell. We should have much more sophisticated ways of analysis, metadata analysis, and machine learning and different ways of combing data in ways that show how the Gulf and its communities are evolving; growing; and, hopefully, becoming safe, resilient places to live, work, and play.