Science—as done by professional scientists—involves curiosity, hypothesis forming, experimentation, data analysis, and the thrill of discovery. However, you might never learn this in a traditional high school classroom, where teachers often present scientific subjects as sets of facts to be memorized rather than as perpetually evolving fields of active inquiry.

We developed a program in which scientists provide teachers with the tools and hands-on experience they need to implement research projects with their students.
Teachers are hardly to blame for this disconnect: Too often, their own education involved “cookbook” laboratory exercises and dry, dated lectures. It’s no wonder that many end up teaching as they have been taught.

To break this cycle and to expose teachers to genuine scientific practice, we developed a program in which scientists provide teachers with the tools and hands-on experience they need to implement research projects with their students. Our results suggest that projects such as ours can increase student understanding of the scientific process.

Most secondary school educators do not have the opportunity to experience authentic research science during their academic tenure. They study science content in lectures and closed-ended lab exercises and take education methods courses that are frequently divorced from any scientific content.

Recognizing the gap between scientific practice and science taught in schools, the authors of the Next Generation Science Standards (NGSS) along with other science education experts [Freeman et al., 2014] have called for reforms enabling students to be able to “mirror the practices of professional scientists” and to develop an “understanding of the nature of science and engineering.” (p. 8 of the NGSS introduction).

We agree with the impulse behind these reform efforts, but we also recognize that they depend on teachers themselves being familiar with scientific practices and able to communicate to their students about the nature of science.

From the Lab to the Classroom

To enhance teachers’ and students’ understanding of how geoscientists create new knowledge, we developed the Research Experiences for Science, Technology, Engineering and Mathematics Students (RE STEM) pilot program. We engaged working scientists who would expose teachers and their students to research- and inquiry-based geoscience experiences.

The RE STEM program consisted of two parts: a professional development workshop for teachers and the classroom implementation of research projects for students. The program staff first developed a protocol (Table 1) that was based on the scientific process and incorporated inquiry-based learning in a formalized format.

The protocol encouraged participants to develop research questions based on background knowledge, to conduct experiments to address the research questions, to formulate conclusions, and to communicate these results. This protocol guided both components of the program. 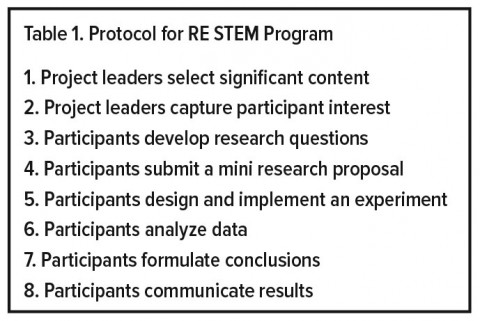 Using a miniproposal template (step 4), participant teams wrote short background, hypothesis, and methods sections to address the question. UMCES HPL scientists reviewed the proposals and made suggestions, after which participants set up and conducted their research experiments (step 5), analyzed their data (step 6), formulated conclusions (step 7), and presented their results to the group via oral PowerPoint presentations (step 8). 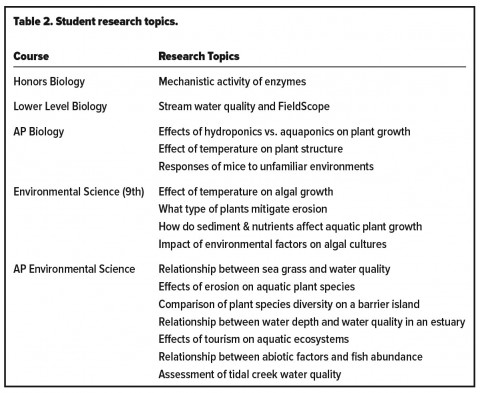 In the second phase of the project, teachers implemented in their classrooms the RE STEM protocol for scientific inquiry. Teachers chose topics for the student research projects that fit their course curriculum. They then prepared students by setting a stage for the research project that provided a compelling introduction to the topics and captured students’ interest.

Once the students were introduced to the topics, they formed groups to complete the steps of the RE STEM protocol. Because teachers chose the topics and the course in which to pilot the research projects, the actual implementation of the experiments varied among the teachers.

Teachers led projects in STEM classes ranging from ninth-grade biology to senior-level Advanced Placement biology and environmental science (Table 2). Project topics ranged from the influence of land use on stream water quality to investigations of barrier island ecology. Several teachers chose to implement classroom-based projects, wherein students conducted investigations in class or on school grounds. Others took students on field trips to local environmental centers and/or parks for their investigations.

One example of the implementation of a student research project involved four students working together to investigate plant species diversity on a coastal barrier island. Students chose three habitat areas (dune, maritime forest, and salt marsh) in which to make their comparison. They first formulated their research question and hypothesized that less resource-stressed environments will have a greater species diversity. They then systematically counted the number of species found in each habitat, compiled and analyzed their data, and presented the results in a paper and a verbal report to the class.

Of the nine teachers who participated in the pilot project, seven implemented student research projects. An external evaluation of teacher responses to the RE STEM program was very positive, and participants appreciated the efforts of project planners and staff.

In summative evaluations of the implementation of the student research projects process, teachers reported that they learned things about their own teaching methods as well as their students’ abilities and inabilities as a result of participating in this RE STEM program. Some commented that it was hard to relinquish control and allow students to guide their own projects. Others were surprised that their advanced students knew so little about the scientific process. 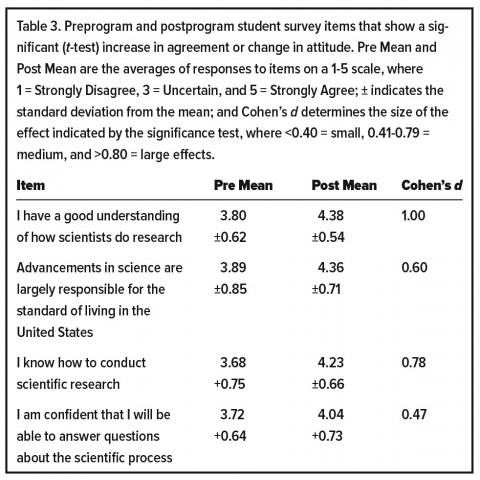 Six of the RE STEM teachers said they plan to implement student research projects in following years, a result that demonstrates the lasting impact of the RE STEM program on its participants.

Results of preprogram and postprogram surveys of 342 participating students show significant increases in average scores for four survey items (out of 12; see Table 3), three of which relate to understanding how the scientific process works. These results indicate that the program had a measurable impact on student understanding of the scientific process. However, the survey results also revealed that students did not necessarily wish to take additional science courses or to choose careers in science as a result of going through the pilot program.

Support from local school district administrations was crucial to this program’s success. Not only did school administrators help select teachers for the program, but they also provided in-school support for student research project implementation, for example, by allowing teachers the time and freedom to deviate from normal classroom protocols.

Also critical was the involvement of UMCES HPL scientists and graduate students, which provided current, real-world content for the RE STEM program and student research projects.

Finally, because teachers had the flexibility to implement projects associated with topics already taught in existing STEM courses, they indicated that they were likely to continue offering research experiences to their students in the years to come.

I thank the National Science Foundation’s Geosciences Education program for providing funding for our RE STEM program. I would also like to thank all participants in the program, particularly Tom Fisher and Jamie Pierson (faculty scientist), as well as Dana Bunnell-Young and Nicole Millette (graduate students) and Elizabeth Day-Miller (project evaluator).