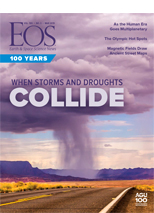 In 1959, the United States built an unusual military base under the surface of the Greenland ice sheet. Camp Century was a hub for scientific research, but it also doubled as a top-secret site for testing the feasibility of deploying nuclear missiles from the Arctic.

When Camp Century was decommissioned in 1967, its infrastructure and waste were abandoned, under the assumption they would be forever entombed beneath the colossal sheet of ice.

But climate change has warmed the Arctic more than any other region on Earth, and parts of the Greenland ice sheet are melting faster than snow can accumulate.

In August 2016, glaciologists published a landmark study in Geophysical Research Letters predicting what could happen in the coming decades if melting ice were to expose the biological, chemical, and radioactive waste left behind at Camp Century.

The study received worldwide media attention and sparked a political dispute between Denmark and Greenland over cleanup of the waste. (Greenland is an autonomous country within the Kingdom of Denmark.) In October 2016, Greenland’s government called on Denmark to accept responsibility for waste that remains at Camp Century and dozens of other abandoned Cold War era bases on Greenlandic soil. Greenlandic officials accused Denmark of failing to protect the rights of the island’s indigenous peoples, who would be affected by remobilization of the contaminants.

In response, Denmark initiated the Camp Century Climate Monitoring Programme, led by the lead author of the 2016 study, glaciologist William Colgan. Colgan and other scientists have begun monitoring the conditions at Camp Century—keeping track of meltwater at the surface, measuring deep ice temperatures at the site, and using ice-penetrating radar to map the depth and location of buried debris.

In this Centennial episode of Third Pod from the Sun, University of Colorado Boulder glaciologist Mike MacFerrin recounts Camp Century’s intriguing history and its role in the Cold War. A coauthor of the 2016 paper, Mike discusses the potential hazard Camp Century’s waste poses to the environment and surrounding communities and shows how climate change is raising geopolitical concerns that had not been considered before.