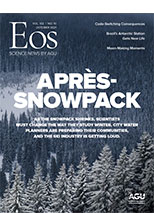 • The Challenges of Forecasting Small, But Mighty, Polar Lows

• How Infrastructure Standards Miss the Mark on Snowmelt

• The Who, What, When, Where, and Why of the Polar Vortex

The polar vortex is a media darling. Headlines frequently announce that it’s coming, collapsing, or splitting, and articles often tout its role in record-setting winter storms. But misconceptions about this atmospheric phenomenon abound, and scientists are still untangling its effects on our weather. Here’s a rundown of what the polar vortex really is.

Swirling Air in the Stratosphere and Troposphere

First off, a definition: The term, a shortening of “circumpolar vortex,” typically refers to a swirling mass of air at far northern or southern latitudes. “It’s a region of high wind speed that encircles the pole,” said Jacob Shultis, an atmospheric scientist at Johns Hopkins University in Baltimore.

These two polar vortices appear at different times of the year: The stratospheric polar vortex develops in the fall and dissipates in the spring, whereas the tropospheric polar vortex is a year-round phenomenon. When these vortices do happen to overlap temporally, they’re still separated by kilometers of vertical airspace, however. “More often than not, they’re kind of doing their own thing,” said Laura Ciasto, a meteorologist at NOAA’s Climate Prediction Center in College Park, Md.

The Flow Breaks Up

That sometimes changes, however. Undulations in Earth’s atmosphere caused by temperature gradients—known as Rossby waves—can travel from the troposphere to the stratosphere, where they can disrupt the stratospheric polar vortex and cause its westerly winds to weaken. When that happens, the stratospheric polar vortex stops being a circular flow centered on the pole and instead becomes more wavey, said Ciasto. “You tend to see more north–south flow rather than just west–east.”

These events, which are known as sudden stratospheric warmings, can have extreme effects on the stratospheric polar vortex, said Zachary Lawrence, an atmospheric physicist at the University of Colorado Boulder. “It can split apart into two separate vortices. It can be pushed very far off the pole.”

These variations in the stratospheric polar vortex can have far-reaching effects beyond the upper atmosphere—they can affect the weather that we experience on the planet’s surface. That’s because sudden stratospheric warmings can cause the tropospheric polar vortex to expand equatorward, sending blasts of cold air to lower latitudes. That’s likely what happened in February of this year, when a record-setting ice storm pummeled wide swaths of North America.

Using satellite data, it’s possible to detect sudden stratospheric warmings, which occur about once every year or so. But it’s impossible to know how the tropospheric polar vortex will respond and what regions might be subject to a cold snap, said Ciasto. “Even though there might be a sudden stratospheric warming, that doesn’t necessarily mean that the United States is going to feel the impact.”

Climatic phenomena can play a role, too. For instance, El Niño conditions—warmer-than-average surface waters in the Pacific and weaker-than-normal easterly trade winds—boost the probability of sudden stratospheric warmings. That’s because they can drive the formation of destabilizing Rossby waves, said Lawrence. “El Niño events affect the generation of waves in the troposphere.”

Peering at Other Worlds

Polar vortices aren’t unique to Earth. Venus, Mars, and several of the gas-dominated bodies in the outer solar system all have them, too. Johns Hopkins University’s Shultis and his colleagues are studying the polar vortex on Titan, Saturn’s largest moon, using data collected by the Cassini spacecraft.

Shultis and his collaborators run computer models based on Cassini data to better understand the structure of Titan’s polar vortex. Modeling is important because the observations—amassed over 13 years while Cassini was orbiting Saturn—don’t extend over a full Saturnian year, said Shultis. That makes it difficult to trace the seasonal evolution of Titan’s polar vortex, he said. “We’re really interested in looking at how it evolves over time.”

So far, the researchers have found hints that Titan’s polar vortex weakens in the middle of winter. That’s very unlike the behavior of Earth’s stratospheric polar vortex and a big surprise, said Shultis. Titan’s global circulation patterns might be at play, the researchers hypothesize: Air is known to descend over the pole that’s experiencing winter, and that movement compresses the air, warming it. That warming, in turn, decreases the local temperature gradient that powers the polar vortex, Shultis and his collaborators suggest.