Colin Waters is Secretary of the Anthropocene Working Group, which has been exploring formal recognition of the Anthropocene as a unit in the geological time scale. He presented their results and recommendations in a talk at the International Geological Congress in Cape Town on Monday, 29 August.  On 1 September, he answered questions during a “hot topics” session hosted by the American Geophysical Union and the IGC.  These answers were captured from the conversation and edited to improve flow.

Why is it time for formal recognition of the Anthropocene and why is doing so important?

The term, “the Anthropocene” was actually created at a conference in 2000 and to present really has no consistent definition. But it is now incredibly widely used—more than 1000 papers have referenced it, with more than 10,000 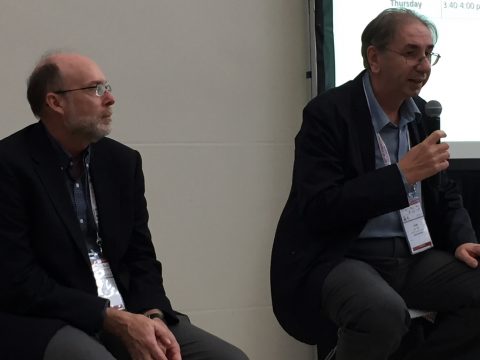 citations of these works and it is in the titles of four journals. And we have a concern regarding the loose usage of terms that do have a stratigraphic and temporal context.  Of our working group, a majority of members agreed we live in the Anthropocene, that we should formalize its definition, and that it should have the status of an epoch.  This means that the Holocene would end if the “Anthropocene” is eventually formalized.

We hope that journals won’t allow usage of a loose, wooly term but instead that the Anthropocene will be something quite specific. By showing it on the International Stratigraphic Chart, there can be a direct expression so that people will understand what it means. It’s a very young duration to have a geological unit, but it’s the one we’re most aware of… to live through the change from Holocene to Anthropocene, and see how we can observe it in sediments.

What is the time frame the working group is recommending as the start of the Anthropocene?

Most of the Working Group recommended a start of the Anthropocene in the middle of the 20th century because we’re seeing more rapid, more global, and higher magnitude anthropogenic signals at that point than any earlier point of time. Humans have had a significant impact over the past millennia, but gradually over several thousand years until a great acceleration in the mid-20th century.

What are the next steps in having the Anthropocene recognized?

Our next step is formalization of a “golden spike” section.  We are looking at ice cores, marine successions, lakes, coral reefs, tree rings, and more as potential sections. These are all at annual or better resolution and can be independently dated with radiocarbon.

We have to show the evidence of the Anthropocene so that it is hard to be denied. We need to show that a signal is global and characterize a type section, and demonstrate that the signal is geological, not just an historical event, which was some of our earlier focus.

We will need to involve the panoply of geosciences to come up with a solution. The work is very much reliant upon research groups doing environmental science that we can summarize. We’re going to perhaps need research groups to come forward to give us additional core and analyses. We need to look at a large number of signals – concrete, plastic; geochemical, for example, lead from petrol exhausts; the mass transfer of species, including domesticated animals across the planet. We’re trying to look at the signals and see where they align. Which is the most abrupt signal that matches those changes?

Plutonium is our proposed favorite. It is so abrupt in its appearance in 1952 from thermonuclear explosions, within six months producing a signal around the planet. It’s a very distinctive boundary. We feel that it will be hard to find an alternative signal that is going to be better than that.

Did politics or the thought of making a political statement enter into the decision?

As a working group we don’t want to have this be politically motivated and that was a feeling throughout our process. Sometimes for science and politics, it can be hard to differentiate. Climate change is a good example. Scientists are expressing what they’re seeing. This is the physical evidence. What politicians want to do with that is their call.

What hope do you have of having this ratified?

If I didn’t have hope I wouldn’t be doing this. The Holocene was only recently ratified and it also took time. Those who came up with it were thinking out of the box when it came to interpreting the data. This process went through the discussion of how can we possibly define a boundary at high resolution, but not in rocks. They broke new ground by having a Greenland ice core as the type section, and a signal in hydrogen isotopes.

Is this going to be our last epoch?

I’m not going to try and guess what is going to happen to the future. If we do say it formally, there’s still change that will happen. What if we become a non-carbon-based economy? Why can’t a significant change mark a new stage or phase in the Anthropocene? It doesn’t have to end because we’ve changed our habits.

How long before closure?

We estimate that we’ll do the initial assessment of different environments in the next 2-3 years. The difficulty is looking at a large number of records, so we need help from the community to identify available initial analyses. If we can select down to 3-4 likely sections or samples, we can do a huge range of additional analyses within those environments. Perhaps in time for the next IGC in Delhi? We can hope.

Our Place in the Food Security Chain

Our Place in the Food Security Chain