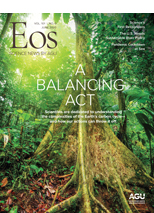 Over the past 50 years, a growing wealth of long-term atmosphere, ocean, and ecosystem observations has provided essential insights into how climate change affects the ways that carbon moves through Earth’s environment, yet many fundamental questions remain unanswered. Perhaps the most challenging and societally relevant question is whether the rate at which the land and ocean can sequester carbon will continue to keep pace with rising carbon dioxide emissions.

Emissions of carbon dioxide (CO2) and methane (CH4) stemming from human activities are rapidly and dramatically altering Earth’s climate. Warmer temperatures drive longer and more destructive fire seasons, shifting precipitation patterns cause flooding in some areas and drought in others, and ocean acidification threatens marine life across the globe.

However, land and ocean ecosystems act as natural buffers that limit the increase of CO2 in the atmosphere by absorbing and sequestering nearly half of emitted CO2. Although anthropogenic greenhouse gas emissions continue to increase, this natural climate change mitigation has so far proportionally kept pace with emissions, limiting global warming to a certain extent (Figure 1).

This situation could change, however. For example, although tropical forests in the Amazon have been CO2 sinks over the past 50 years, increasing land use change, drought, fires, and tree deaths in recent years may have tipped the balance, making this region a periodic net carbon source [Yang et al., 2018]. Arctic observations, meanwhile, have revealed little change in long-term CH4 emissions from the region so far. However, Arctic warming has occurred at double the average global rate [Intergovernmental Panel on Climate Change, 2014], and the resulting abrupt permafrost thaw events and increased winter emissions could eventually lead to a tipping point by the mid-21st century [Turetsky et al., 2019].

Decades of global measurements can now help address two key questions: (1) How do ecosystems respond to climate change? (2) How will these ecosystem responses change Earth’s carbon budget in the future?

Predicting interactions between Earth’s climate and carbon cycle is challenging because of the number of feedbacks involved. Carbon cycle feedbacks are interacting processes that amplify or dampen carbon emissions.

Indirect feedbacks influence carbon exchange via ecosystem responses to climate change and are referred to as carbon-climate feedbacks. For example, CO2 is less soluble in warmer water; thus, warmer oceans absorb less CO2, meaning more CO2 remains in the atmosphere. This, in turn, leads to further warming in a process known as a positive feedback. Warmer temperatures lead to longer growing seasons and reduce atmospheric CO2 through photosynthetic uptake by plants, but warming also increases plant and soil respiration, water stress, drought, disturbance, and forest dieback, which reduces CO2 uptake and increases the risk and severity of wildfires (Figure 2).

Methane is produced by organisms that do not use oxygen to convert nutrients into energy (anaerobic respiration), and it is removed by oxidation in the atmosphere. Although CH4 is a small component of the overall carbon budget, it is a potent greenhouse gas, and changes in atmospheric CH4 are of great concern. Changes in wetland extent due to changing precipitation in the tropics and warming-induced permafrost thaw in the Arctic could lead to large changes in CH4 production [Zhang et al., 2017]. Thawing Arctic permafrost, in particular, has been cited as a potentially major positive feedback, where thawing leads to increased CH4 release, driving warming and more permafrost thaw.

The Carbon Cycle from Many Vantages

Our understanding of carbon-climate feedbacks is built on long-running observational networks and ecosystem manipulation studies, ranging from site-level, bottom-up experiments across a variety of ecosystems to global, space-based, top-down measurements.

Another important data set comes from the global FLUXNET network of eddy covariance flux towers. This network, comprising hundreds of instrument towers across many different ecological settings, uses micrometeorological observations to estimate exchanges of water, energy, and carbon across entire ecosystems and over a span of decades. Over this period, these towers have captured a wide range of environmental variability, providing insights into the sensitivity of plant and soil physiology to changes in temperature, humidity, and disturbance events like fires and land use change [Baldocchi, 2019]. FLUXNET is an essential tool for expanding our understanding of plant physiology to the landscape scale.

Similarly, warming studies (e.g., Spruce and Peatland Responses Under Changing Environments (SPRUCE)) manipulate soil temperature to elucidate potential positive feedbacks from soil respiratory carbon losses under climate warming [Carey et al., 2016]. FACE and warming studies provide some of the most direct evidence of ecosystem sensitivity to future climates. However, both FLUXNET and FACE sites are limited to northern midlatitude ecosystems, in part because of logistical constraints and in part because that’s where most of the scientists are. Thus, there are observational gaps in climate-sensitive tropical, boreal, and Arctic ecosystems.

Space-based observing systems are an essential complement to site-level measurements, allowing researchers to monitor ecosystem function across continents and identify critical regions and scales for carbon cycling. With multidecadal satellite remote sensing records, it has become possible to distinguish interannual variability from trends. For example, the widespread “greening” of northern high latitudes may indicate increased vegetation productivity in response to CO2 fertilization or warming [Mao et al., 2016]. Remote sensing time series can also detect and quantify areas of disturbance and land use change, revealing the extent to which warming-induced increases in fires and insect disturbance may cause forests to transition from carbon sinks to carbon sources.

Satellite-based microwave sensors can be used to infer additional surface ocean properties influencing air-sea exchange, such as rain, wind speed, sea state, and salinity. These properties influence density-driven thermohaline circulation originating in high latitudes, which is principally responsible for relocating CO2 into the deep ocean, where it is stored for several hundred years. Changes in precipitation that increase river runoff and warmer temperatures that melt sea ice may freshen high-latitude surface oceans. This freshening may result in less overturning of the layers of water in the oceans, thus slowing thermohaline circulation and carbon removal.

A Struggle for Consistency

Different methods of carbon flux observations do not always produce consistent results: There is an emerging chasm between constraints on carbon cycling derived from small-scale and large-scale observations: Not only do the physical processes differ at different scales, but different experimental methods and data sources produce different results. For example, multidecadal site-level observations at FLUXNET sites do not clearly show that plants increase their carbon uptake in response to CO2 fertilization, but they do confirm that plant and soil respiration are sensitive to temperature, suggesting that warming will lead to carbon loss from the biosphere. Furthermore, because of regional observational gaps, data upscaling methods trained on these sites (e.g., FLUXCOM) estimate unrealistically large carbon sinks in the tropics [Tramontana et al., 2016]. In contrast, top-down constraints from atmospheric CO2 measurements show trends of increasing carbon uptake by unmanaged ecosystems in both the tropics and northern extratropics.

Just as observational methods produce different results, current terrestrial ecosystem models indicate different trends in carbon uptake.
Reconciling these conflicting results is challenging because of the extreme difference in scales between bottom-up and top-down estimates and heterogeneity among ecosystems. Resolving the discrepancies requires both more site-level observations in relatively undersampled regions and continued investment in space-based satellite observations, which are crucial for monitoring regional changes in carbon uptake.

Just as observational methods produce different results, current terrestrial ecosystem models indicate different trends in carbon uptake (Figure 3), limiting our understanding of the evolution of carbon-climate feedbacks [Friedlingstein et al., 2014]. This divergence is partly due to complexities in simulating biogeochemical systems and their sensitivity to climate. It also arises from incomplete representation of complex land-atmosphere interactions, such as water stress impacts from repeated droughts and shifts in precipitation.

Yet both process-based and empirical models remain key for understanding recent changes and projecting future climate and carbon cycle changes. Increasingly complex models with sophisticated representations of dynamic vegetation, plant hydraulics, and disturbances are under development, but this increasing complexity is more challenging to validate.

The International Land Model Benchmarking Project provides an attempt to formalize model validation by developing systematic methods for confronting a variety of models with a standard set of observations to advance model development. An emerging area of research deals with optimizing parameterizations within terrestrial biosphere models by assimilating quantities such as soil moisture, solar-induced chlorophyll fluorescence, and variation in atmospheric CO2 [Scholze et al., 2017], providing additional observational constraints on parameter uncertainty. However, this technique cannot account for errors in model structure.

Ocean modeling studies will benefit from increased resolution and better representation of critical processes such as eddies, brine plumes, and formation of oxygen minimum zones. Increased stratification due to surface ocean warming and decreased vertical mixing both reduce upwelling, which is critical for providing nutrients to the surface ocean. During El Niño–Southern Oscillation (ENSO) events, nutrient shortages can cause fisheries to collapse. Although ENSO events are a natural part of the ocean-atmosphere climate system, their global teleconnections drive interannual variability in the carbon cycle [Liu et al., 2017], and the evolution of ENSO with climate change is uncertain.

Understanding these complex feedback-mitigation interactions is important not only for stakeholders who assess mitigation scenarios but also for those tasked with clearly communicating the expectations of mitigation strategies to the public. If expected changes are not communicated well, muted reductions in atmospheric CO2 after the implementation of mitigation might be misinterpreted as failures or shortcomings of mitigation efforts. Mitigation strategy planning must account for both rising CO2 emissions and reduced efficacy of natural CO2 sinks (Figure 4).

An emerging area of carbon cycle research examines human and economic responses, which are an indirect form of feedback. Climate-driven decreases in economic activity could decrease emissions in some sectors—an example of a negative carbon-climate-economic feedback. New modeling frameworks designed around Shared Socioeconomic Pathways attempt to integrate human responses into Earth system models to account for the interactions between population, economic growth, energy system parameters, land use, emissions, and concentrations [Riahi et al., 2017].

Investing in Measurements and Models

Looking forward, it’s likely that potential nonlinear, time-dependent, and state-dependent feedbacks and responses in the carbon cycle will remain difficult to predict, particularly because many feedbacks interact with each other. Investments should be made to continue observations with existing networks and observing systems and to expand these sorts of observations to undersampled regions (e.g., the Arctic and tropics). And new types of measurements (e.g., of carbonyl sulfide and solar-induced fluorescence) that can provide new perspectives on ecosystem processes should be explored.

Including socioeconomic responses to climate change in Earth system models will also be critical for understanding future changes to the climate and carbon cycle. Anthropogenic CH4 emissions are ultimately tied to how we grow food (e.g., in rice paddies and cattle feed lots), deal with waste (e.g., in landfills), and produce energy (e.g., via oil and gas extraction)—all essential activities for civilization. Mitigating CH4 emissions in response to climate change will impact economic activity, an example of emerging climate socioeconomic feedbacks.

Finally, a large spread in future carbon uptake is predicted by terrestrial biosphere models, suggesting that they do not yet have sufficient skill to offer precise predictions of future uptake at fine scales and into the far future. Further development of evaluation metrics and improved model representations of Earth system processes are thus crucial for understanding recent changes, projecting further into the future (e.g., to 2300), and identifying which data are key to collect.