This year, AGU’s Sharing Science program—which helps scientists share their work with a broader audience—encouraged scientists to draw, on a large whiteboard wall, pictures depicting their research. Within a day or two, almost the entire billboard-sized wall had been crammed with doodles of everything from bat poop and rock-eating bacteria to complicated chemical reactions and volcanic eruptions.

We at Eos wanted to use our investigative chops to guess what kind of science 10 of those beautiful drawings represented. Here we have Eos staff writer JoAnna Wendel and Scientific Content Editor Mohi Kumar doing their best. Don’t worry—if we don’t guess correctly, it’s definitely our fault, not the artist’s! We loved seeing scientists stepping out of the box to communicate their research to a large audience.

If you have a better idea for what a drawing represents, leave it in the comments below or tweet it at us (@AGU_Eos and @AGU_SciComm). If you’re the artist, please let us know! We’d love to give you a shout-out. 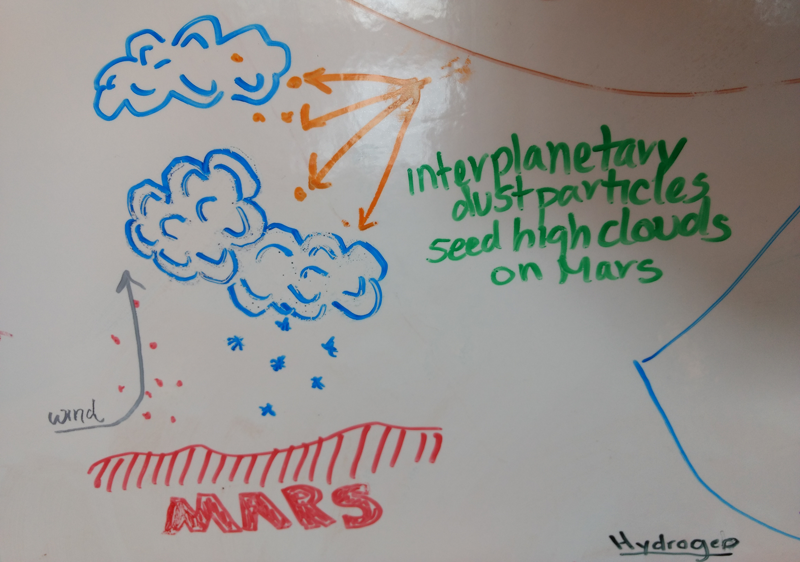 JoAnna: Let’s start with an easy one. The artist wrote “Interplanetary dust particles seed high clouds on Mars.” Thanks, artist! This was neatly represented by orange arrows that I’m assuming point to the dust particles, which go into a high-up blue cloud. Those clouds then descend toward the surface of Mars and cover Mars with a light dusting of…er…snow. Does that mean future astronauts will have a snowy holiday season?

Mohi: Ah, but there are some subtleties here. The wind kicks up dust on Mars, but not high enough to seed the highest-altitude clouds observed on Mars. So what seeds those lofted wisps? Perhaps interplanetary dust. If these clouds rain any particles out, surface samples on Mars could hold trace chemical signatures. 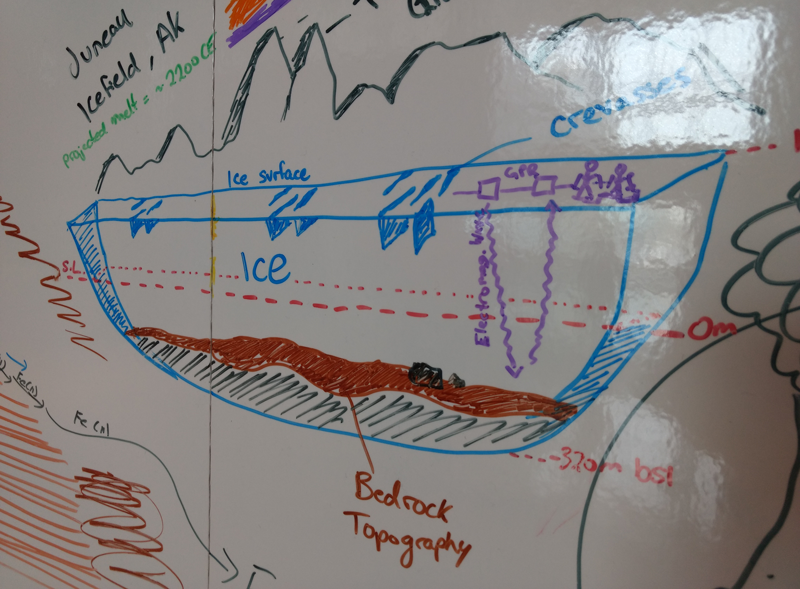 JoAnna: Here we’ve got a nice 3-D cross section of what I’m assuming is a glacier with underlying bedrock. I think I’m right about that because of the nice labels that say, “ice surface,” “ice,” and “bedrock topography.” It looks like there are some cute little purple scientists standing on top of the ice, using instruments to send waves through the ice. I think they’re trying to image the underlying bedrock using electromagnetic waves! Did I get it???

Mohi: I think so. The purple scientists are in an Alaskan ice field, weaving around crevasses, taking care not to fall in. They’re using ground-penetrating radar (my favorite kind) to image the topography of the bedrock. Preliminary results show that the bedrock surface is quite a bit below sea level. With the shape and elevation of this bedrock layer established, they can calculate the ice’s volume. Using climate models, they can then estimate when this entire ice field will vanish: in about 2200 CE. Watch out, sea levels! 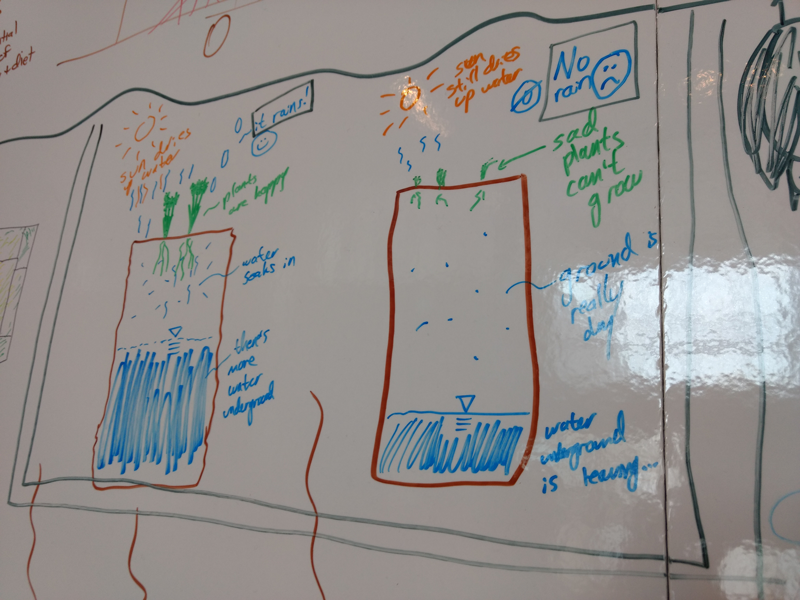 JoAnna: Ok, we’ve got two test tubes. Or maybe they’re two scenarios? On the left, there’s a lot of sun, and some plants growing,…and it says “there’s more water underground.” On the right, there’s still sun, but very clearly no rain. The “sad plants can’t grow” and the “water underground is leaving.” So maybe this researcher studies how rain affects the amount of underground water available to plants?

Mohi: Test tubes? Ppppfffffttttthhhh. We have two soil columns, under the same Sun. The Sun in both scenarios is a constant force that leaches moisture from the soil into the atmosphere. But the left column also gets rain, which raises the water table. Yay! Plants are happy! But no rain in the second column, so plants shrivel to husks. As climate changes, in which locations across the globe will you have the right soil column or the left soil column? This scientist seeks to find out. 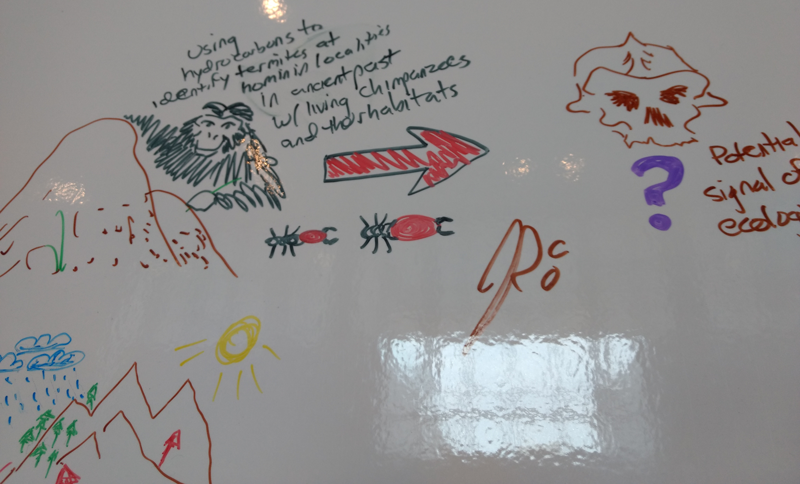 JoAnna: Ok, so we’ve got a clue here regarding termites, hydrocarbons, and living chimpanzees. And also ancient chimpanzee ancestors of some kind? In the picture, I see a giant apelike creature living in the mountains, maybe ordering some bugs off to get him food, but I doubt that’s what the artist was trying to draw. Here’s my guess: This scientist looks at chimpanzee poop to find termite remains, which have some kind of isotope in them that’s unique to their environment. Then they can look at ancient termite remains (fossils?) to see what the environment was like in the past.

Mohi: Mountains? Those are termite mounds, and our friendly chimp cousin is about to have a feast. Assuming that termites are a dominant food source of modern chimps, it’s safe to say that our hominin ancestors shared a similar diet. But I feel like if poop were involved, the artist would have totally drawn that because…well…POOP. I think it’s more likely that termite mounds can become fossilized, and perhaps some fossils are found in the vicinity of known hominin excavations. If scientists can match the termite mounds to the ages of the hominins found, they can extract hydrocarbon signatures and, from there, information on climate. This could give clues about the fate of early humans, including those that went extinct. 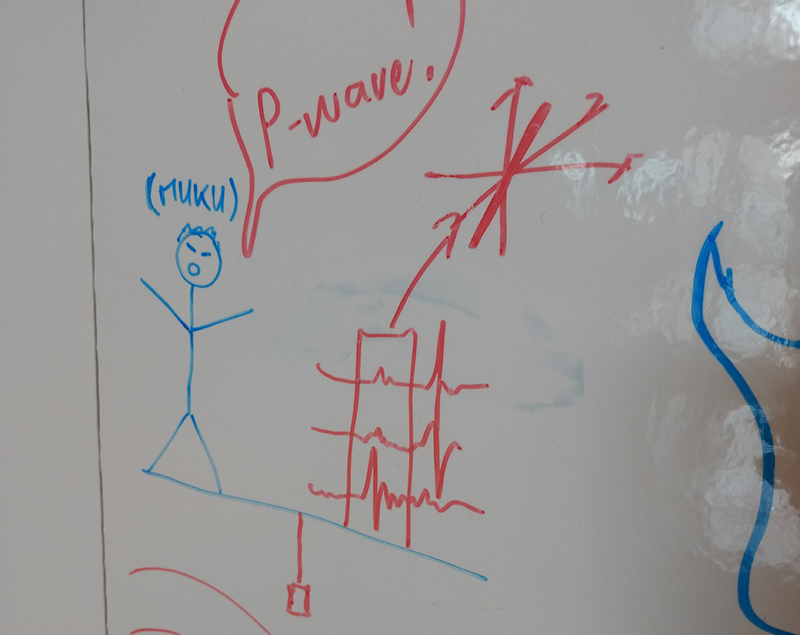 JoAnna: I know that a P wave is a type of seismic wave. It looks like there’s a guy standing on one side of a seesaw yelling “P-WAVE!” and maybe a seismometer on the other side of the seesaw. I think this scientist is trying to compare his weight to the seismometer’s weight for reasons unknown. Am I close?

Mohi: Not a bit. P waves arrive early, so perhaps their arrival (1) gives clues about the rest of the signal—and the scientist is trying to tease out those clues—or (2) can be used as an early warning, giving people precious moments to find a sturdy structure to hide under before the real shaking begins. I’m going with 2. The person screams “P-wave,” alerting everyone to run for cover. Yes? 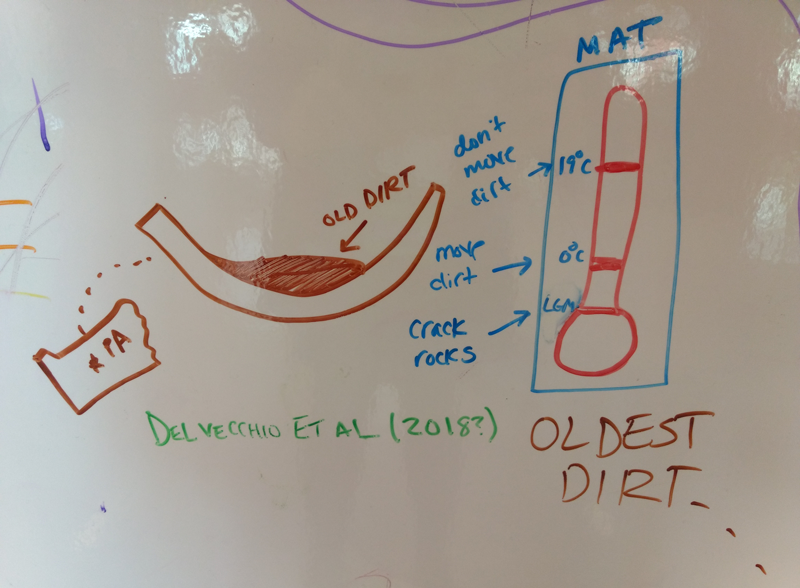 JoAnna: In Pennsylvania, there’s really old dirt. But it’s not the oldest dirt. That has something to do with its temperature? Or something called “MAT”? What is this “MAT”?

Mohi: I think “MAT” is mean annual temperature, and the thermometer is charting from the Last Glacial Maximum (LGM) to present day. Now, the rest gets tricky. Somewhere in Pennsylvania is a rock unit bowed by old dirt. That’s about as far as I can go. But I do know that the artist hopes to publish next year! 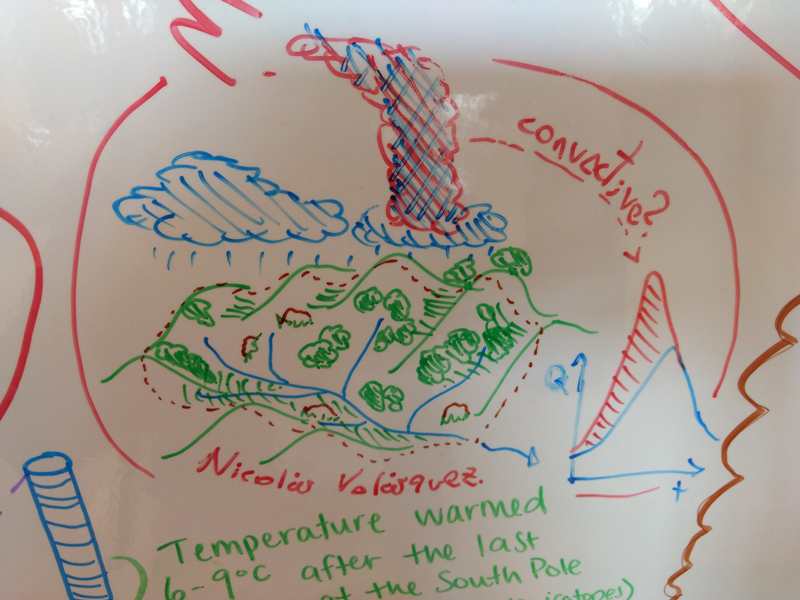 JoAnna: There are some mountains. With nice trees on them. And little blue lines coming off of them I’m assuming represent streams. There are some rain clouds, actively raining onto the mountains. Then there’s this cross-hatched red and blue cloud attacking one of the rain clouds. There’s also a graph on the right, but I don’t know what that means. Is this researcher studying how convection in the atmosphere affects rain clouds?

Mohi: This is a watershed! So pretty. The catchment is fed by rainfall over the seasons. Over time, streamflow (Q) reflects that seasonal rainfall. BUT!! Streamflow of late has spiked compared to normal rates. What’s going on? Enter: Thunderstorms! Severe weather! So here we have climate change fiddling with dynamics on the scale of the watershed—useful info for people living within this valley. 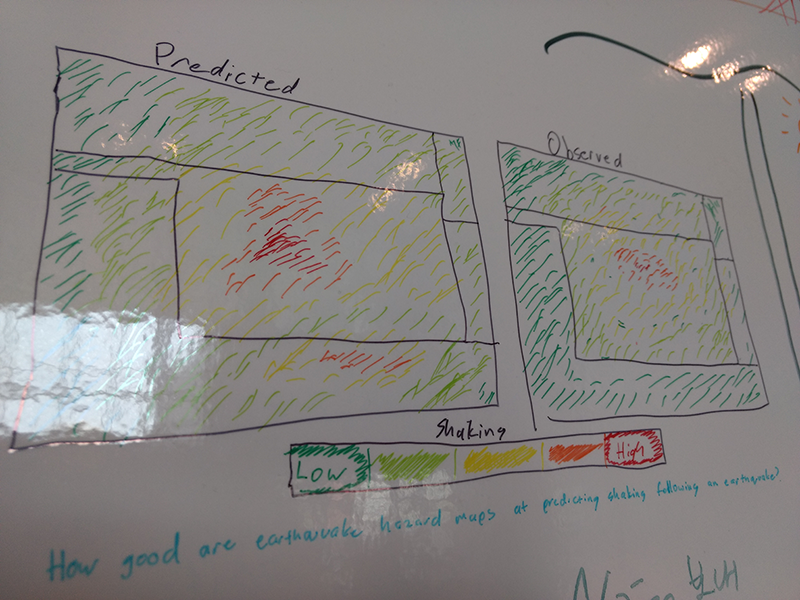 Mohi: NYC? Someone is going to see those as fighting words. Over there in OKLAHOMA, induced seismicity is a major issue. But, regardless of the source of the shaking, people want to know: Do hazard maps perform well at predicting shaking following an earthquake? The research by this artist answers with meh. The shaking intensities observed are much less than the shaking intensities predicted. So the artist is trying to figure out why. 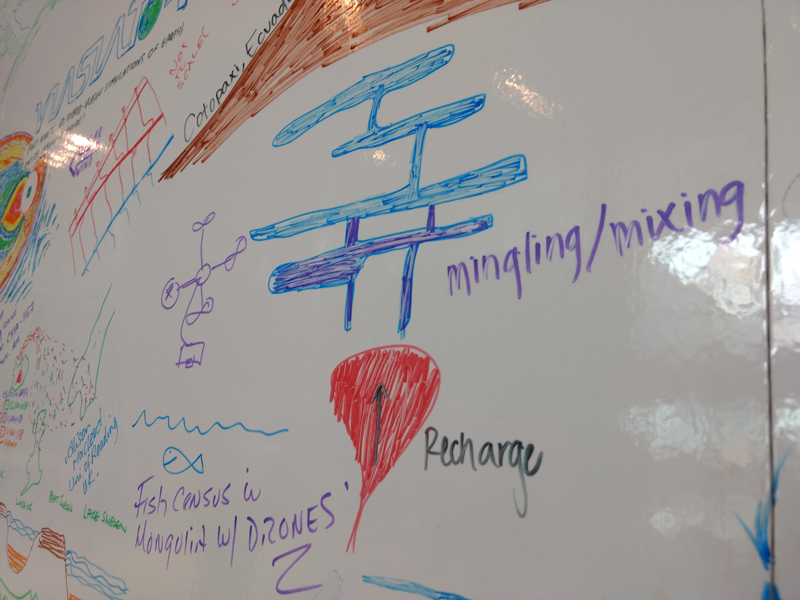 Mohi: Lol. I think I got this one! This must be a magma chamber…see at the top? Cotopaxi. Magma recharge (red) enters a complicated honeycomb of a magma chamber that is already filled with melt from a different recharge event (blue). They mix and mingle—see the purple melt? So now the questions remain: How do we figure out the timeline of recharge events, given this mixing? How do signatures overprint? 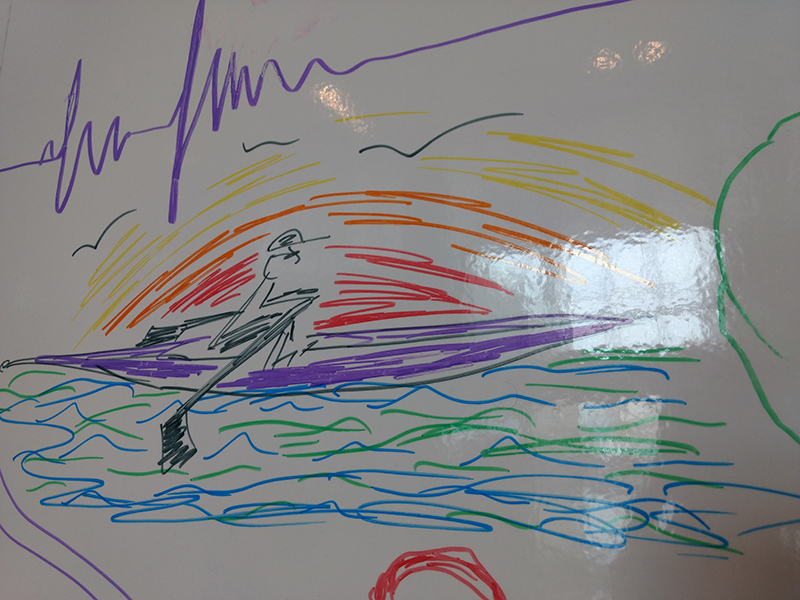 JoAnna: Clearly this scientist just wants a break from doing science to take a nice long rowboat ride in the ocean while watching the Sun set.

Mohi: First, it’s a sea kayak. Second, she’s rowing her boat during an earthquake. Given her vehicle, she can’t be too far from the shore, so she’d best watch out for the incoming tsunami!

Asymmetric Development of Auroral Surges in the Northern and Southern Hemispheres

Big Questions, Few Answers About What Happens Under Lake Ice