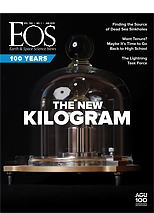 Venus is Earth’s closest planetary neighbor and the nearest in size to our “Blue Marble,” yet many questions remain about its atmosphere, in part because of challenges in generating fine-scale analyses. Research on the atmosphere of Venus typically results in a vertical resolution between 0.4 and 0.7 kilometers, which is too coarse to observe small-scale atmospheric features. Phenomena like the Venusian “cold collar,” a distinct temperature minimum about 60 kilometers above the surface at high latitudes, remain poorly understood because remote sensing algorithms cannot clearly delineate them.

In a new study, Imamura et al. addressed the resolution problem by applying an analytical twist to the standard data. The researchers evaluated the radio occultation data using a radio holographic method known as full spectrum inversion (FSI); this is the first time the technique has been applied to Venusian atmospheric data. Among the differences in the two approaches, FSI calculates the arrival time of the radio signal to Earth as a function of the wave frequency; in comparison, GO obtains the radio wave frequency as a function of time.

By using FSI, the researchers obtained an unprecedented vertical resolution (less than 100 meters) in the remotely sensed data. The finer resolution revealed small temperature structures in the atmosphere that the authors suggest are manifestations of atmospheric gravity waves and thin turbulent layers. Atmospheric gravity waves and turbulent layers generated by those waves play crucial roles in Earth’s middle atmosphere but have not previously been well studied on Venus, partly because of the coarse-scale analysis.

The findings also clearly delineate the cold collar temperature minimum hovering around the tops of clouds in the atmosphere. The authors suggest that the sharp gradient was created by adiabatic cooling. Such inference was not possible using the GO method.

The study’s conclusions yield a more precise view of Venus’s atmospheric temperature profile than has previously been published, and both results offer new insights into the atmospheric dynamics on Venus. The radio holographic analysis also provides many possibilities for observing narrow vertical structures in the atmospheres of other far-flung planets. (Journal of Geophysical Research: Planets, https://doi.org/10.1029/2018JE005627, 2018)

The Possible Evolution of an Exoplanet’s Atmosphere