The helicopter flies back and forth over the high desert, tracing small fluctuations in Earth’s magnetic field with a magnetometer at the end of its wandlike “stinger” attachment and marking the locations with GPS coordinates. Later, scientists scour the magnetic field data for clues to mineral and petroleum deposits, faults, buried lava flows, water resources, and even pipelines and landfills buried beneath the surface of the ground. When the area was first surveyed 40 years ago, data processors recorded approximate locations and drew contour lines on a paper map. This time, using modern best practices, the details can come into focus.

Simply put, aeromagnetic data are foundational for constructing 3-D geologic models that can be used to address society’s geoscientific needs. However, some areas are covered more thoroughly than others. Also, private industries like petroleum and mineral companies often do their own surveys but prefer to keep their most recent and accurate data to themselves.

The U.S. Geological Survey (USGS) has recently completed an assessment of existing, publicly available aeromagnetic data for the United States to identify and prioritize areas that need better coverage. We developed a system for ranking the available data using current best practices, and we created a map that summarizes the current coverage in the United States.

What We Have Now

The U.S. public aeromagnetic data program is managed by the USGS, the agency that acquires, stores, and serves most of these data. The USGS was an early pioneer in aeromagnetic surveys and has been acquiring aeromagnetic data since the 1940s. However, the USGS has been unable to replace older, inadequate data with modern surveys.

Instead, legacy analog data have been digitized, surveys that have inadequate sampling have not been replaced, modern surveys have been acquired only over postage stamp–sized areas (generally <2,000 square kilometers), and these disparate data sets have been merged without the ability to standardize the data to common parameters. As a result, high-quality public aeromagnetic data do not exist for most of the United States, placing the country behind much of the rest of the world.

Just how inadequate is the U.S. aeromagnetic coverage? We recently developed an assessment, or ranking, methodology that considers modern best practices for acquisition of aeromagnetic data, common practices in the past, and the suitability of the data to support geologic mapping and other research activities. We ranked the quality of existing aeromagnetic surveys and the corresponding data with respect to three categories: data type, survey specifications, and data issues (Table 1). The three categories were ranked separately for each survey; then an overall rank was assigned on the basis of the poorest category rank, with 1 being the best and 5 being the worst.

aOverall rank for an aeromagnetic survey is determined by the worst rank (largest number) assigned to any of the three categories.
bTerrain clearance.
cRatio of flight line spacing to typical distance above shallowest magnetic sources in the survey area. Thresholds of 152 meters and 305 meters are derived from typical legacy survey parameters for the United States.

Data type. The issue of data type focuses on two considerations (Table 1). The first is real-time GPS navigation, a revolutionary development for aeromagnetic surveys that emerged in the mid-1990s. Surveys flown with GPS have more accurate positioning and thus superior data quality. GPS navigation is required for a rank 1 survey. The second consideration is the presence or absence of digital flight line data, that is, the data that represent the sampling of the magnetic field acquired during the survey. Digital flight line data allow for rigorous quantitative interpretation and are required for rank 1. Unfortunately, many public aeromagnetic surveys flown in the 1940s–1960s are available only as digitized representations of paper contour maps, not digital data points.

Survey specifications. The proper specifications for an aeromagnetic survey consider two related principles. The first principle is that the lower the terrain clearance of the aircraft (i.e., the closer the magnetometer is to the ground surface) is, the greater the resolution of the data in the direction of flight is, meaning that subtle anomalies related to finer details of the geology are more likely to be captured (Figure 1). Surveys with rank 1 specifications are flown with terrain clearances of 500 feet (~152 meters) or less (Table 1), as permitted by safety and legal airspace restrictions. Many surveys in the database were flown much higher (especially before the 1970s), with an average terrain clearance of 1,000 feet (305 meters).

The second principle is related to the spatial sampling required to produce adequate maps of the magnetic field—how closely spaced are the data points?  Maps representing magnetic sources that are near the ground surface require more closely spaced sampling points than those for sources deep underground. Because sampling points are always tightly spaced along flight lines, the critical consideration is how far apart to space the lines to get an accurate representation of sources at different depths. In a classic paper, Reid [1980] showed that the ratio of flight line spacing to the shallowest source depth (Figure 1) is ideally 1:1 for modern analysis, and this ratio should not exceed 2:1. In survey areas where most of the magnetic sources are elongated perpendicular to the direction that survey flight lines are flown, a 2:1 ratio can provide sufficient resolution because signals coming from the elongated sources can be extrapolated between flight lines. Otherwise, a 1:1 ratio is essential to achieve optimum resolution. Rank 1 survey specifications have a ratio that does not exceed 2:1. It is not possible to determine the true magnetic field between flight lines if the line spacing exceeds that threshold. 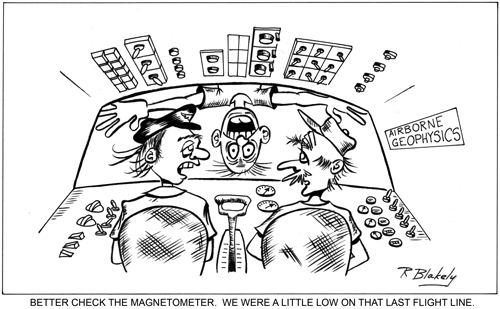 Data issues. The final criterion considered for the ranking scheme evaluates the presence and severity of problems that commonly plague legacy public data. These problems include data gaps, instrumentation errors, processing errors, and data accessibility problems. Surveys with no significant data issues receive a rank of 1 for this criterion. Ranks 2–5 have increasing severity or number of issues. Determining the severity of data issues can be subjective, depending on an expert’s past experiences in overcoming specific data issues. Thus, some inconsistency in how different experts rank surveys in this category is to be expected.

What the Rankings Mean

Rank 1 aeromagnetic data can meet these needs in all cases. That is, they were acquired using modern best practices for survey design, meet all modern standards for data type and quality, and support the widest variety of geologic studies. Rank 2 data can meet some of these needs, but quantitative interpretation is handicapped. Rank 3, rank 4, and rank 5 present increasingly difficult, even impossible, challenges to geologic interpretation (Table 2).

Figure 2 is an illustration of the large improvement in resolution of rank 1 over rank 4 data.

For example, only about 1% of the lower 48 states is covered by rank 1 data that meet modern standards, and no rank 1 surveys have been flown in Alaska or Hawaii. More than 95% of the country is covered by ranks 3, 4, and 5 data; geoscience studies in these areas are hampered by a lack of supporting information from aeromagnetic data.

New executive and secretarial orders may spur an effort to acquire rank 1 aeromagnetic surveys across the United States.
The need to improve the nation’s aeromagnetic data has recently taken on greater urgency. Executive Order 13817, “A Federal Strategy to Ensure Secure and Reliable Supplies of Critical Minerals,” implemented by Department of the Interior Secretarial Order 3359, “Critical Mineral Independence and Security,” directs the USGS to develop a plan to improve the nation’s understanding of domestic critical mineral resources. Key parts of the plan include assessing and improving the quality of the nation’s geologic mapping, topographic data, and airborne geophysical data, particularly aeromagnetic data.

So what now? Although efforts to create better databases of existing public data have been largely successful [Finn et al., 2001], past attempts to promote a nationwide, systematic collection of modern aeromagnetic surveys have not gained traction [Hildenbrand and Raines, 1990; U.S. Magnetic-Anomaly Task Group, 1995]. The new executive and secretarial orders may spur an effort to acquire rank 1 aeromagnetic surveys across the United States, now in the planning stages at the USGS.