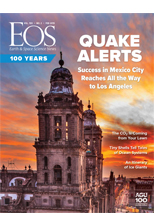 Earth’s core is a hot, dense reservoir driving geological processes from the heart of our planet. The core is often described in two parts: a solid iron-nickel inner core surrounded by a liquid outer core of similar alloys. Convective currents in the outer core generate Earth’s magnetic field, preventing the planet’s atmosphere from being stripped away by the solar wind and making life on Earth possible.

But sitting beneath our feet under 2,900 kilometers of rock, Earth’s core is more inaccessible than the surface of Mars. No probe can directly sample the core-mantle boundary, and the planet’s inner structure has been deduced from seismology, not observation.

There may, however, be a work-around.

The scientists studied magma-derived rock samples from volcanic islands above oceanic hot spots. These islands, such as Réunion in the Indian Ocean, sit atop rising columns of hot material that many geologists think originate as deep as the core-mantle boundary. If there were materials from the core getting into the mantle, Rizo said, these mantle plumes would be their paths to the surface, and she and her team were able to use newly precise measurements of a chemical isotope tracer to detect this.

The chemical tracer is an isotope of tungsten (W), its composition a remnant of Earth’s formation. When Earth was still molten, it separated into an iron core at the center and a silicate mantle above. Siderophiles, metal-loving elements including tungsten, primarily accumulated in the core, leaving sparse concentrations in the silicate-dominated mantle.

“The hypothesis was that when the Earth’s core separated, the Earth’s core acquired a very specific and very different tungsten isotopic composition from the rocky part [of the planet],” Rizo said.

So when Rizo and her colleagues measured the ratio of two tungsten isotopes, 182W and 184W, they expected ancient mantle rocks to have a 182W/184W ratio about 200 parts per million higher than that of Earth’s core.

And that’s just what they found when they measured the 182W/184W ratio of old rocks, such as the 3.5-billion-year-old Mount Ada Basalt in Western Australia. Setting an arbitrary terrestrial standard at zero, the researchers found that those rock samples yield 182W/184W ratios around 13−15, whereas Earth’s core would plot at −200.

But in relatively younger samples from mantle plumes, Rizo and her team measured negative tungsten isotopic ratios, with Réunion Island samples registering as low as −20.2, those from the Kerguelen Islands in the Southern Ocean hitting −16.5, and samples from Hawaii reaching −7.2.

“What we’re saying in the paper is that less than 1% of core contribution into the source of mantle plumes is going to be able to shift the isotopic composition towards these negative values,” Rizo said.

But critically, those negative values are tungsten isotope ratios, not tungsten concentrations—the core still contains much more tungsten than the mantle, according to Richard Carlson, director of terrestrial magnetism at the Carnegie Institution for Science. The same amount of tungsten may migrate from core to mantle and mantle to core over time, but the 182W/184W ratio in the mantle would drop in value, whereas the ratio in the core would rise ever so slightly.

“This is how you can explain a change in W isotopic composition of the mantle by exchange with the core, without also seeing the mantle W concentration go up,” Carlson said.
.

.
And there are good reasons, in addition to the new evidence of Rizo and her colleagues, to believe that core-mantle interaction is limited to this type of isotopic exchange, according to Carlson. In fact, for a long time, many geoscientists were skeptical there could be any core-mantle interaction at all. “You’ve got a core that’s, you know, 3 times denser than the silicate overlying it,” he said. “With that magnitude of a density difference, the expectation for the core and the mantle to mix back together over time is very low.”

“It was basically changing the isotopic composition from above, whereas Hanika’s paper is changing it from below by mixing with the core,” Carlson said.

But if there were such a bombardment, known as the “late veneer,” Carlson said, it would have ended very early in Earth’s history and doesn’t explain the isotopic composition of younger rocks from mantle plumes.

But an alternative explanation posits that Earth’s core started out all liquid, with the inner core crystallizing later. This crystallization could have forced any oxygen there into the still-liquid outer core, Rizo said, which would then force the exsolution of tungsten out of the core.

“The variability that we are measuring in the tungsten isotopic composition of the rocks,” Rizo said, “if it is related to the crystallization of the inner core, we might be able to find evidence of when the inner core started crystallizing, when the dynamo started, and when our magnetic field started.”

Future research may help answer some of these remaining questions, and that field is just beginning, according to Graham Pearson, a professor of Earth and atmospheric sciences at the University of Alberta.

“In the early 2000s, late 1990s, the analytical precision just wasn’t good enough to be able to make the measurements at the required precision to show much of an effect,” he said. “That’s the beauty of what’s been happening more recently with a number of groups, including Hanika Rizo and colleagues, really improving the measurement precision capabilities.”

The results, Pearson said, are a solid endorsement of “blue sky science.”

“I think the field is now open for a lot more measurements on both young and old rocks to firm this picture up,” Pearson said.