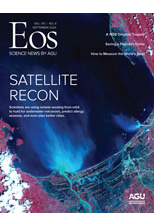 Who would have guessed that an important tool in a mayor’s planning kit would one day be a NASA satellite? Environmental hazards are becoming a larger part of every city leader’s day, and satellite observations help municipalities not only react to such hazards but also, increasingly, plan for them.

Margaret M. Hurwitz and colleagues write about two cities—Chicago and Rio de Janeiro—that are involved in NASA partnerships to incorporate Earth observation data into their planning. Chicago is using satellite data to address air quality and better understand the city’s urban heat island. In Rio de Janeiro, city leaders are planning for natural hazards and other effects of climate change. Both cities are proving how global data can be adapted for local use.

In our September issue, we’re looking at the ways in which Earth observations can help scientists with their research. With so much data publicly available from national space agencies like NASA and the accessibility and reduced costs of launching CubeSats, it’s important to consider the many ways in which having an eye in the sky can supplement in situ monitoring.

A great example of this is pollen tracking. Ghassem R. Asrar and colleagues explain that on the ground in the United States, there are not nearly enough stations per capita for pollen counting—a labor-intensive endeavor. Physicians concerned with the rising number of people affected by asthma and seasonal allergies recently gathered to discuss the problem. They’ve already implemented a network of cameras on towers throughout the United States, but they’re realizing that existing satellite observations of vegetation can offer important supplementary data that show the start, peak, and end of pollen season. This geohealth collaboration between medical professionals, public health experts, and geoscientists using Earth observation data could allow many of us quite literally to breathe easier.

Remote sensing can also be used for novel purposes—like hunting down the origins of pumice rafts. Philipp A. Brandl writes about how he and his team were able to trace the source of a raft floating in the South Pacific Ocean to “Volcano F.” Combining seismic data with satellite data was crucial to their endeavor.

Finally, be sure to read about the efforts of Benjamin Keisling and colleagues to diversify their university’s seminar series. With all the attention being paid to making the geosciences more inclusive, it might seem overwhelming to try to fix everything at once. Keisling’s group shows how to focus on a specific problem and assess its challenges. Bookmark this article as a reminder that we can all make changes, one step at a time.