The Rise of Machine Learning 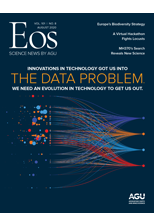 • Are Cosmic Rays a Key to Forecasting Volcanic Eruptions?

• How Machine Learning Redraws the Map of Ocean Ecosystems

• The Rise of Machine Learning

We cover the data problem here in Eos quite a bit. But “the data problem” is a misnomer: With so many ways to collect so much data, the modern era of science is faced not with one problem, but several. Where we’ll store all the data is only the first of them. Then, what do we do with it all? With more information than an army of humans could possibly sift through on any single research project, scientists are turning to machines to do it for them.

“I first encountered neural networks in the 1980s,” said Kirk Martinez, Eos science adviser for AGU’s informatics section and a professor at the University of Southampton, United Kingdom, when he suggested the theme for our August issue. “Neural networks were a ‘biologically inspired’ way to make algorithms which could be trained to respond to certain inputs. Since then it has blossomed into a part of machine learning as we know it today.”

Grappling with climate change research is one of the clearest places where machine learning will be crucial. “Currently, less than 5% of available environmental observational data are used in numerical models of Earth systems,” writes Amy McGovern and colleagues in “Weathering Environmental Change Through Advances in AI.” Recent innovations for artificial intelligence methods will allow researchers to harness more of those data, but realizing the full potential will require interdisciplinary collaboration to build the proper infrastructure.

What then? Residents in the U.S. Great Plains are already getting AI weather forecasts that give 36 hours of notice before a hailstorm, write McGovern et al. AI is mapping ecological provinces in the ocean, and soon it could even decode alien atmospheres, if scientists can overcome “the curse of dimensionality.”

The discoveries machine learning can help scientists make come at a cost.
Machine learning, said Martinez, is going to be an essential part of data analysis in Earth and space sciences. “It gives us a way to classify images and signals that we would have struggled to process before,” but we also need to understand its limitations.

The discoveries machine learning can help scientists make come at a cost. The processing power required for these algorithms requires massive amounts of energy—and many in the geoscience community are clamoring for even more powerful supercomputers. In “Earth System Modeling Must Become More Energy Efficient,” Richard Loft writes about the irony of creating a significant carbon footprint to build climate models that tell us what burning all that carbon is doing to climate. Instead, he urges scientists to lead by example, offering several ways to think about—and lower—the energy requirements of these systems.

On the theme of analyzing and interpreting data, don’t miss Stephanie Zeller and David Rogers’s “Visualizing Science: How Color Determines What We See.” They write, “Visualization’s single most effective encoder—color—remains vastly understudied,” but here they offers a masterful introduction of the many considerations involved when conveying data. Needless to say, the images illustrating their article are page turners.

We hope you enjoy this issue on data and machine learning and that it makes you think about the ways in which you might use it—or improve its use—in your own work.