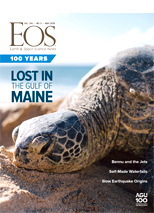 In September of 2019, the Intergovernmental Panel on Climate Change (IPCC) will release a new assessment of the state of the cryosphere—all Earth’s frozen water, including sea ice, ice sheets, and glaciers—and the impact of ice loss on the world’s oceans.

The last IPCC report, released in 2013, relied on direct mass change measurements gathered for about 500 glaciers, a small sampling of the more than 200,000 glaciers found worldwide, Zemp says. The new report combines traditional field-based glaciological monitoring methods with satellite-based geodetic methods to measure changes in ice thickness for over 19,000 glaciers worldwide, about 10% of the total number.

The two methods mesh together very well, Zemp says. “The field measurements provide a picture of the annual fluctuations, while the satellite data allows us to track overall ice loss over years to decades.”

Researchers found that between 1961 and 2016, glaciers lost more than 9,000 billion tons of ice. “That’s a very big number equivalent to an ice cube the size of Germany over 30 meters thick.” The meltwater produced from a chunk of ice that size would raise global sea levels by about 27 millimeters, Zemp says.

On shorter timescales, the team estimates that the planet is losing 335 billion tons of ice each year, contributing to increases in sea level on the order of 1 millimeter per year. That means that glacial melting contributes about one third of the current sea level increase of 2.5 to 3 mm per year, with the rest coming from the thermal expansion of seawater as the oceans warm and melt ice sheets in Greenland and Antarctica, Zemp says. Over corresponding periods, the glacier estimates are about 18% higher than those produced by the 2013 IPCC report because of the improvements in measuring mass loss in mountain glaciers.

“Overall, their conclusions aren’t dramatically different from previously published work, but this provides a more complete picture of what’s happening to the world’s ice,” says Andrew Bliss, a glaciologist at Colorado State University in Fort Collins who was not involved in the new study.

The new database will help improve modeling studies of future ice loss and corresponding sea level rise, he says. “The advances they have made will allow modeling work to move forward more confidently as we can use the past to better calibrate our models and look to the future in a more comprehensive way.”