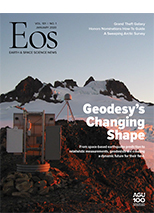 As we begin year 101 here at AGU, let’s go back to the fundamentals. In fact, let’s start with a single stone atop a hill in Hanover, Germany. In 1818, Carl Friedrich Gauss used this triangulation stone to create a geodetic survey of the city. Today it serves as inspiration to Jakob Flury, who lives about an hour’s walk from this monument to his profession.

“It’s really a new world,” Flury says in our feature story. “This four-dimensional reality, this curved space-time” is our post-Einstein world, and Flury is part of a new movement to champion relativistic geodesy. Atomic clocks are going to give us an entirely new perspective—down to the millimeter, perhaps—on the shape of our world.

Geodesy, of course, was one of the original seven sections formed when AGU was founded in 1919, along with seismology, meteorology, terrestrial magnetism and electricity, oceanography, volcanology, and geophysical chemistry. Like most fields, geodesy has evolved from using simple—though revolutionary—apparatuses on the ground to sophisticated instruments in low Earth orbit. (Searching our Fall Meeting 2019 scientific program for “satellite and geodesy” brought up more abstracts than one person could get through if the conference lasted a month.)

Elsewhere in the issue, we hear from scientists also interested in the effects of gravity in space. Tidal heating, write Alfred McEwen and his colleagues, is key to understanding the way planets and moons form. McEwen walks us through the history of our understanding of the Jovian system from Pierre-Simon Laplace’s resonance discovery in 1771 to Voyager 1’s 1979 observations and up to today, as scientists eagerly await two important space missions that could finally reveal answers to a litany of questions, including “Does Io Have a Magma Ocean?”

At the start of our second century together, let’s take a moment to truly assess the shape of our world.