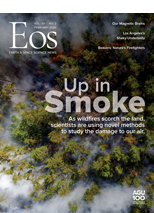 The bushfires in Australia are a never-ending story of loss, tragedy, and record-setting moments.

The fires have claimed the lives of at least 27 people and countless animals and destroyed 2,000 homes—and bushfire season still has 2 months to go.

Even as the fires rage on, the smoke is beginning to clear around the long-lasting environmental impacts of the blazes. Here’s a (nonexhaustive) list of their short- and long-term effects on the environment.

1. Scientists fear an immediate loss of biodiversity in Australia, because many species are endemic to the continent.

The fires are proving deadly for Australian wildlife.

An estimated 1 billion animals have been killed so far, according to scientist Chris Dickman at the University of Sydney. But this number doesn’t include frogs, invertebrates, or bats. Invertebrates, which include insects, earthworms, snails, could be dying by the trillions, according to Science News.

Relief efforts have just begun after fires on Kangaroo Island, whose landscape was called “apocalyptic” by the Humane Society International. The organization said that in a particularly hard-hit portion of the island, they found one living koala among thousands of carcasses of koalas, kangaroos, wallabies, and birds, according to the Guardian.

“As an ecologist, it’s a very tragic thing to find yourself having to think about ‘What if my species is now extinct?’”
Many species call Australia their only home, making the threat to their habitat particularly worrisome.

The Kangaroo Island glossy black cockatoo was rebounding from near extinction in Australia, up from about 150 individuals in 1995 to nearly 400 in 2019. But the fire on Kangaroo Island destroyed the majority of the bird’s habitat and singular food source, seeds from the drooping she-oak.

An endemic species of velvet worm may also be threatened. The New York Times reports that their home in one of Australia’s national parks has been badly affected by the fires. Ecologist Tanya Latty told the Times that she may use the specimens she has in her lab to begin a captive breeding program to save the species. “As an ecologist,” Latty said, “it’s a very tragic thing to find yourself having to think about, ‘What if my species is now extinct?’”

A team of scientists said that the fires have pushed at least 20 threatened species closer to extinction. Threatened species in Australia sometimes number in the hundreds, and areas that rarely burn went up in flames this year.

Researchers are turning to GoFundMe to pay for lost survey equipment and other costs.

Fires on Kangaroo Island have burnt the entire known range of the critically endangered KI dunnart. If you want to support recovery efforts for this species, including resurveying habitat, and building a fenced predator free exclosure, please donate here: https://t.co/01clodda8s

2. Debris from the fires could threaten water supplies.

Cheers broke out in Sydney last week as rain fell lightly on the capital. Rain and cooler temperatures could help tamp down the blazes.

But too much rain, falling too heavily, could spell disaster for Australia’s water supplies.

Ash, soot, and charred vegetation could clog up streams, dams, and beaches, leading to blooms of algae and threatening water quality.

Warragamba Dam outside of Sydney is one cause for concern: The dam supplies water for 3.7 million people, but 80%–90% of the catchment area has burned, National Geographic reports. If heavy rains wash off burned forests in the areas, a torrent of sooty material could choke up its waters and lead to blooms of cyanobacteria.

Although public health won’t likely be at risk, the blooms may turn water in the Warragamba musty or earthy and exacerbate low water supplies that are already at less than half the dam’s capacity, according to Gizmodo Australia. Melinda Pavey, NSW’s minister for water, property and housing, announced in December that officials would try to intercept or isolate sooty flows headed into Warragamba by using booms and curtains.

Particles of ash could also lodge themselves in the gills of fish or filter feeders like mussels.

Fish and other aquatic life will be more at the mercy of the rains, however. A massive influx of nutrients from runoff could bring algal blooms to rivers and beaches. Blooms suck up oxygen available in the water column, strangling fish and other life. Particles of ash could also lodge themselves in the gills of fish or gag filter feeders like mussels.

3. Animals are hungry and ecosystems may grow back differently.

The government air-dropped thousands of carrots and sweet potatoes to supplement the marsupials’ diet.
Many animals couldn’t outrun the blazes because the wildfires moved quickly and burned hotter than normal. Drought and high temperatures fanned the flames.

The lucky animals that did survive face a new reality: Their food sources have gone up in smoke. As fire eradicated vegetation on the rocky habitat of brush-tailed rock wallabies in New South Wales, the government air-dropped thousands of carrots and sweet potatoes to supplement the marsupials’ diet.

Hungry predators are also a risk to survivors: Cats can travel 20–30 kilometers to “mop up all the native animals that are left there over the next few months,” ecologist Sarah Legge told Vice.

Plant opportunists may take root in the burned landscape as well. As Wired reports, faster-growing and weedier species may dominate landscapes previously forested, and invasive species could move in. Although only time can tell what will appear in the scorched terrain, entomologist Nigel Andrew told Wired that “the diversity of our natural environments is going to change.”

4. Smoke from the fires is circumnavigating the planet and ratcheting up carbon dioxide emissions.

Smoke billowing from the fires is making its way around the planet, injecting aerosols in the upper atmosphere and increasing carbon dioxide emissions.

Measurements of the ultraviolet aerosol index by NASA satellites last week showed aerosol values at some of the highest levels ever recorded. Larger aerosol values indicate that the smoke is sitting high up in the atmosphere in a layer called the stratosphere. Large pyrocumulonimbus storms above the fires in Australia are acting like chimneys, shooting smoke high into the air as if they were volcanic eruptions or nuclear explosions.

It’s not clear how the carbon-rich aerosols released by the fires could impact climate. The Washington Post reports that recent studies may indicate that it can lead to a warming effect.

Meanwhile, the fires are also spitting out vast amounts of carbon dioxide, one of the greenhouse gases responsible for global climate change.

Fires are thought to be carbon neutral, but climate change may limit how well forests can grow back.
The fires have already released enough carbon dioxide to rival Australia’s annual human-caused emissions: An estimated 400 million tons of carbon have been released from the fires, according to NPR. Last year, Australia emitted roughly 540 million tons from human sources.

But all the carbon dioxide emitted from the fires may not stay in the atmosphere: Fires are thought to be carbon neutral because forests suck in carbon to regrow. But climate change may limit how well forests can grow back.

5. The fires are raining soot on New Zealand’s glaciers, which could speed up melt.

A view of the Franz Josef Glacier in New Zealand revealed another consequence of the fires: “caramelized” snow darkened by soot. One Twitter post said that the snow was white just 1 day earlier.

Near Franz Josef glacier. The “caramelised” snow is caused by dust from the bushfires. It was white yesterday pic.twitter.com/Ryqq685Ind

White snow has a high albedo and reflects sunlight at a relatively high rate. The darker the color the snow is, however, the lower the albedo will dip, and the more heat the glacier absorbs.

The Australian reported ashy snowfields in New Zealand in early December. The country is in the middle of summer, so although the high glaciers may get a new coat of snow soon, the lower glaciers might not get one until March.

The ash could increase glacier melt this season by 20%–30%.
New Zealand’s glaciers are already dwindling because of warming temperatures: Last year, more than half of the largest glaciers in the country lost snow from the previous winter and previous years, in some cases. The glaciers have lost a third of their snow and ice volume since the 1970s.

Andrew Mackintosh, a researcher at Monash University in Melbourne, told the Guardian that the ash could increase glacier melt this season by 20%–30%, though he cautioned that the numbers were estimates. Fortunately, he said, the effects won’t last much longer than a year.

The Intersections of Environment, Health, and COVID-19 in Africa