The coastal land margin of the United States has seen numerous extreme events of historical proportions in just the first two decades of the 21st century. An incomplete list includes Hurricanes Charley and Ivan in 2004, Katrina, Rita, and Wilma in 2005, Ike (2008), Irene (2011) and Sandy (2012), the Louisiana Flood of August 2016, and now Harvey and Irma in 2017.

Common to all is the juxtaposition of resulting floods with displaced people and damaged infrastructure. These seminal disasters will exceed $500 billion in damages, and cumulative loss of lives and suffering are devastating. However, it is possible that these tragedies can serve as Sirens for planning our future.

To understand the past, present and future state of the coastal land margin we suggest that a “system of systems” approach is useful. For example, each weather event is a system unto itself that interacts with the built and natural environment. How these systems respond to an extreme condition is better understood by studying the multi-faceted, complex interactions of humans and nature. Add modern climate change and associated outcomes of, for example, sea level rise, and the value of holistic system of systems methodology becomes apparent.

The region where the land meets the sea is a dynamic system. Population grows; shorelines, dunes and barrier islands morph; land use and land cover changes; marshes expand and contract; and with sea level rise these alterations will be magnified.

The coastal land margin is not like the hard edge of a bathtub. When sea level rises in a coastal ocean basin the response in the nearshore regions is best modeled dynamically. The process diagram below illustrates the integrated system of systems approach for understanding the coastal dynamics of sea level rise [Kidwell, et al., 2017]. 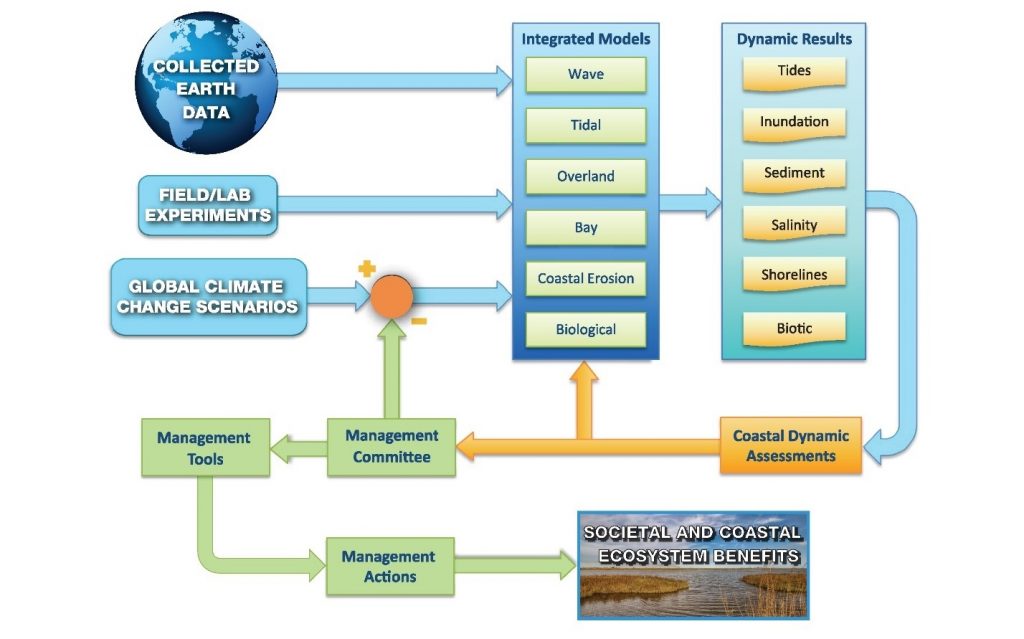 This represents a recent paradigm shift in our computational capabilities and our approaches. A recent special issue of Earth’s Future, entitled Integrated field analysis and modeling of the coastal dynamics of sea level rise in the northern Gulf of Mexico, provides a comprehensive overview of this paradigm shift.

Papers in the special issue, for example, suggest that storm surge response to sea level rise is not simply additive. Storm surge flooding for the Mississippi, Alabama, Florida panhandle regions more than double with an overall increase of nearly 140% from present-day (282.7 km2 of flooding) to a 2-meter sea level rise (672.3 km2 of flooding). To put this into perspective, the average land area of a coastal city in Mississippi, Alabama, and the Florida panhandle is 50 to 100 square kilometers. In the same sea level rise scenario, agricultural lands in the region will see an increase in inundation area by nearly 190%, and total inundated land area will increase by nearly 90%.

The nonlinear response to sea level rise is not limited to the northern Gulf of Mexico or other low-gradient landscapes, but applies to coastal regions around the world, creating some of the greatest societal challenges, as exhibited this hurricane season.