Millions of people around the world live in coastal communities that are directly threatened by sea level rise. In a new review, Kopp et al. explore the state of sea level science and highlight key challenges in using it to inform adaptation responses to evolving coastlines.

The researchers emphasize that near-term actions can influence long-term vulnerability. For instance, siting decisions made by Thomas Edison and his contemporaries directly affected the impact of Hurricane Sandy on New Jersey’s electrical grid over a century later, in 2012. Thus, the authors argue that it is important to look ahead when making decisions that affect coastal communities.

One of the biggest challenges facing scientists studying sea levels, the authors note, is the deep uncertainty in projections of future sea level rise, especially in how these projections relate to human emissions and ice sheet instability. In addition, sea level scientists grapple with the interplay between long-term trends and short-term extreme events, such as storm surges. 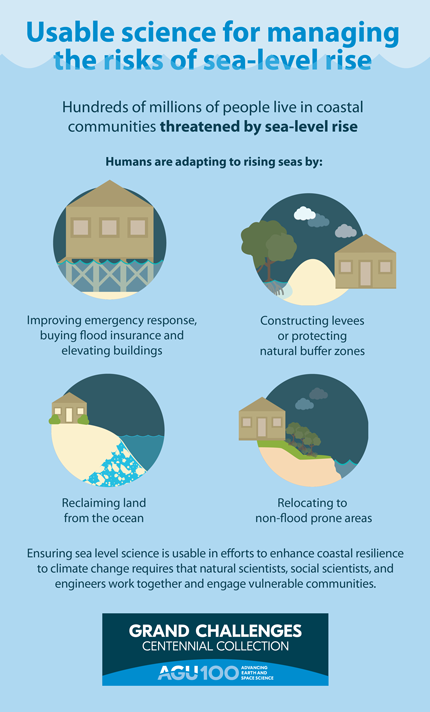 As coastal flooding becomes more frequent, its impact on physical coastlines and coastal ecosystems, as well as on human responses to flooding, will influence the effects of subsequent sea level rise. The authors observe that research examining the socioeconomic impacts of sea level rise often overlooks the potentially major impacts of human migration and shifts of capital to or from a coast and note that clarifying these dynamics could aid in decision-making.

The researchers round out their review by exploring strategies for using sea level science to inform coastal planning despite deep uncertainties. They highlight existing efforts to address sea level rise around the world, for example, in the Netherlands, in New York’s Jamaica Bay, and in Monmouth County, N.J.

Ultimately, the authors argue that improving scientific understanding of sea level rise is not sufficient on its own to inform adaptation efforts. Rather, a transdisciplinary approach incorporating natural sciences, social sciences, engineering, decision science, and political economy is needed to ensure that sea level science is relevant for the inhabitants of coastal communities and is actually put to use in improving coastal resilience. (Earth’s Future, https://doi.org/10.1029/2018EF001145, 2019)

How Infrastructure Standards Miss the Mark on Snowmelt

Seaports Expected to Grow by up to Fourfold by 2050