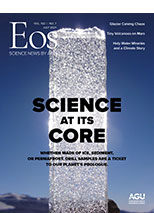 In the Cretaceous period, 100 million years ago give or take a few tens of millions, Earth was a very different place than today. Flowering plants and trees had only recently evolved to coexist with conifers, ferns, cycads, and other groups, while a diverse array of dinosaurs was the dominant form of megafauna on land. The global climate in which these plants and animals lived was also very different: warmer, steamier, and virtually devoid of ice.

Today, Earth is markedly cooler than the Cretaceous, and ice sheets and glaciers still cover large portions of the poles. Yet we know conditions are changing. The planet is already about 1°C warmer than it was during preindustrial times because of anthropogenic emissions of greenhouse gases like carbon dioxide (CO2), and many governments are working to limit further warming to no more than 2°C (or even 1.5°C) above preindustrial levels [Intergovernmental Panel on Climate Change (IPCC), 2018].

Meanwhile, Earth scientists are critically evaluating the possibility and consequences of scenarios in which radiative forcing (the surplus in the amount of solar energy Earth absorbs compared to what it radiates back into space) drives temperatures beyond those targets. What will happen, they ask, if atmospheric CO2 levels (pCO2)—about 280 parts per million by volume (ppmv) in the preindustrial era and more than 415 ppmv now—reach 800–1,300 ppmv and the atmosphere warms as much as 5°C by 2100 [IPCC, 2018]? The ensuing climate change would raise sea levels and could produce drastic shifts in the hydrologic cycle that would exacerbate hazards like drought, floods, fire, and extreme temperatures—all of which could severely affect ecosystems and humans around the world.

In this effort to project future climate scenarios, it is invaluable to investigate times in the geologic past when pCO2 levels and temperatures were higher than today because these are the best natural analogues that we have to provide reference points for the future [Tierney et al., 2020]. One such time of interest is the Cretaceous (145.5 million to 66.0 million years ago), when atmospheric conditions created an intense “greenhouse” climate on the planet.

In 2006, workers on the SK project, an ambitious terrestrial paleoclimatic and paleoenvironmental research effort in China’s Songliao Basin, began drilling through the basin’s rocks to obtain the first complete record of the terrestrial Cretaceous climate (Figure 1). The project, named SK from the Chinese Pinyin of the phrase “Songliao Scientific Drilling,” is being conducted under the framework of the International Continental Scientific Drilling Program (ICDP) [Wang et al., 2013a, 2013b; Gao et al., 2019]. Findings following the first two phases of drilling have already revealed valuable insights. With the final phase of drilling just completed, we anticipate that new research will lead to additional revelations about past—and potential future—climate conditions.

The Cretaceous period is an archetypal example of a greenhouse climate. Atmospheric pCO2 levels reached as high as about 2,000 ppmv, average temperatures were roughly 5°C–10°C higher than today, and sea levels were 50–100 meters higher [O’Brien et al., 2017; Tierney et al., 2020]. These conditions resemble the most extreme scenario that the IPCC has predicted could occur by the end of this century, with pCO2 levels greater than 1,200 ppmv and global temperatures roughly 4°C higher [IPCC, 2018].

The Cretaceous represents the last gasp of dinosaurs’ dominance in Earth’s ecosystem; in addition, it was a time of rapid evolutionary turnover and proliferation of mammals, birds, and angiosperms (flowering plants). For decades, the scientific community has been thoroughly engaged in understanding Cretaceous climate, especially how events such as the Chicxulub asteroid impact and Deccan volcanism contributed to evolution and to the extinction of nonavian dinosaurs and other biomes [Hull et al., 2020]. Despite this intense interest, we still lack long and continuous continental geological records of the Cretaceous.

The SK project includes three main scientific objectives. The first is to assemble, from drill cores collected, a terrestrial “gold pillar” for the Cretaceous—a new high-resolution standard for correlating and dating Cretaceous terrestrial and marine strata and for identifying key stratigraphic boundaries. Such boundaries include those marking the Jurassic-Cretaceous and Cretaceous-Paleogene (K-Pg) transitions, as well as terrestrial responses to Cretaceous oceanic anoxic events (OAEs) when oxygen levels in the ocean dropped precipitously.

The second objective is to study Cretaceous terrestrial climate change and its links to biological evolution and extinction in East Asia, which will help us understand the responses of northern midlatitude climate to greenhouse-driven change. The third objective is to understand the mechanisms and processes behind the massive accumulation of organic matter in this large, long-lived lake basin, which will enhance our knowledge of the petroleum resource in the Daqing Oilfield.

The drilling portion of the SK project included three phases (Figure 2). The first phase, SK-1, was completed in 2006–2007 with two boreholes drilled near Daqing City, Heilongjiang Province. This phase recovered 2,486 meters of core dating from the Late Cretaceous to early Paleogene that includes the 66-million-year-old K-Pg boundary representing the last mass extinction and the demise of dinosaurs [Wang et al., 2013a; Gao et al., 2015, 2019].

The second phase, SK-2, was completed in 2014–2018 in Anda County, Suihua City, Heilongjiang Province. SK-2 drilled to a depth of 7,018 meters, the deepest ever by an ICDP project at the time, and recovered 4,134 meters of core. This core stretches from Permian-Triassic basement rock (roughly 200 million to 300 million years old) to Early Cretaceous sediments [Gao et al., 2019].

In total, the three phases of the SK project have recovered about 8,200 meters’ worth of terrestrial sediments spanning the entire Cretaceous.
Drilling for the third phase, SK-3, started in September 2020 in Nong’an County, Changchun City, Jilin Province, and as of late January, nearly 1,600 meters of terrestrial sediments from the middle Cretaceous have been recovered. This time period was the warmest interval during the past 150 million years and includes OAE2 about 94 million years ago. This event is considered one of the largest perturbations to Earth’s carbon cycle, a time when organic material piled up on the seafloor because of decreased oxygen levels in the ocean.

In February 2021, the SK project completed all drilling and coring. In total, the three phases have recovered about 8,200 meters’ worth of terrestrial sediments spanning the entire Cretaceous.

Deciphering the Story in the Strata

Research since 2006 investigating the SK-1 and SK-2 cores has resulted in many multidisciplinary scientific achievements. A precise chronostratigraphic framework—basically, a timeline of sedimentary layers—that pins down dates to within 100,000 years has been established for the SK-1 cores. A variety of methods were used to construct this timeline: radiometric dating (analyzing the decay rates of different radioactive isotopes), magnetostratigraphy (tracking orientations of magnetic polarity preserved in rock layers), biostratigraphy (comparing fossils of particular ages across different layers), and cyclostratigraphy (tracking orbitally induced climate change cycles recorded in the sediments) [Wu et al., 2014]. The resulting age model allows direct correlation of data from the Songliao Basin with data from sedimentary records collected elsewhere in the Cretaceous world.

Stable carbon and oxygen isotopes preserved in fossil ostracods, tiny lake-dwelling crustaceans, from the Songliao were found to record both an overall cooling trend through the Late Cretaceous and local signals of lake basin evolution [Chamberlain et al., 2013]. Meanwhile, studies of sedimentary structures, mineralogical compositions, and stable isotopes in lake and paleosol (ancient soil) sediments indicated that large fluctuations in air temperatures over land, humidity, and moisture sources occurred during the last 10 million years before the dinosaurs went extinct [Gao et al., 2015]. These findings have demonstrated that considerable climatic changes occurred before the demise of dinosaurs, and they have contributed to the ongoing debate over relationships between climate change, volcanism, the Chicxulub impact, and mass extinction [e.g., Hull et al., 2020].

Findings based on studies of the SK cores have also fueled questions about ancient seawater incursions into the paleo-Songliao lake, evidence for which comes from microfossils of marine foraminifera and other marine organic biomarkers found in intervals of the SK cores [Wang et al., 2013b; Xi et al., 2016]. Although the cores dominantly record an ancient lake environment during this time, episodic and fast incursions of seawater may have altered the chemistry of lake water and promoted the preservation of organic matter under anoxic (oxygen-poor) conditions.

Several widespread disturbances in Earth’s carbon cycle—represented by OAEs—are known to have occurred during the Cretaceous from records of marine organic carbon burial. However, until recently, no direct links had been found between these marine data and records of terrestrial organic carbon burial during the same time. Analysis of the early SK cores revealed geochemical markers of OAE3 about 88 million years ago, the last Cretaceous OAE, that are contemporaneous with markers from the Western Interior Seaway (the shallow sea that covered much of what is now North America), providing evidence that this carbon cycle disruption indeed affected both land and sea [Jones et al., 2018].

New Research on the Horizon

This drilling will also provide a new, terrestrial record of OAE2, which is characterized by widespread distribution of marine black shales in major ocean basins and represents a major disturbance of the global carbon cycle. This Cretaceous terrestrial record from the SK cores in the Songliao Basin will be further integrated with counterpart marine records from the Western Interior Seaway in North America to understand more fully land-ocean linkages at Earth’s surface, for example, whether lakes were anoxic, like the oceans [Wang et al., 2013b].

The SK project team invites the geoscience community to participate in collaborative research investigating the SK cores, which span continuously from the Late Jurassic to the early Paleogene. Following regulations established by oceanic scientific drilling programs, the SK cores are available in a long-term repository in Beijing and are completely open to Earth scientists from all over the world.

We anticipate that through the combined efforts of experts from a variety of research fields, the more than 8,000 meters of cores from the Songliao Basin will elucidate the history and mechanisms of interactions among the climate system, biosphere, and lithosphere in the age of dinosaurs during Earth’s most intense greenhouse state of the past 150 million years.

Intergovernmental Panel on Climate Change (IPCC) (2018), Summary for policymakers, in Global Warming of 1.5°C: An IPCC Special Report on the Impacts of Global Warming of 1.5°C Above Pre-industrial Levels and Related Global Greenhouse Gas Emission Pathways, in the Context of Strengthening the Global Response to the Threat of Climate Change, Sustainable Development, and Efforts to Eradicate Poverty, edited by V. Masson-Delmotte et al., 32 pp., World Meteorol. Organ., Geneva, Switzerland.