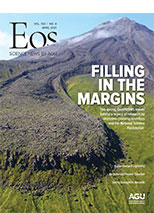 Earth’s hot, pressurized interior is composed primarily of rock that, despite being solid, contains vast stores of fluids rich in carbon and dissolved gases. Unlike the free-flowing waterways of Earth’s surface or the groundwater just beneath, however, these subsurface fluids have long been trapped within minerals deep inside the planet, some since its formation 4.5 billion years ago. Indeed, there is likely more water stored in Earth’s interior than is on its surface, constituting a global ocean in the rock below our feet [Hirschmann, 2006].

We refer to these deep fluids as volatiles—the most common of which include water, carbon dioxide (CO2), and sulfur dioxide (SO2)—because they readily turn to gas in Earth’s near-surface region. However, down below, they often remain chemically bound to minerals or in a liquid state due to the massive pressures they experience. Deep volatiles play critical roles in driving volcanic and plate tectonic processes on our planet. For example, the presence of water in rock reduces the temperatures required to melt rock, which promotes the formation of magmas that feed volcanic eruptions. Deep volatiles can also weaken and damage rocks, allowing Earth to deform more readily by flowing or fracturing, and they influence the occurrence of earthquakes.

Volatiles escape Earth’s interior when they are dissolved in magmas that ascend toward the surface in volcanic regions. As magmas cool and solidify, either as erupted lavas or as igneous rocks emplaced in the crust, they release their dissolved gases, which can then be expelled through fumaroles near volcano summits or through seafloor vents (often called black smokers for the dark billowing plumes of precipitating minerals that pour from them). If, as magma rises to the near surface, the dissolved volatiles transform into gas bubbles that rapidly expand, they can catastrophically fragment magma to drive explosive volcanic eruptions.

Gases expelled in volcanic regions—water vapor, CO2, SO2, methane, and others—can become incorporated into surface water and into minerals within crustal rocks. They can also, however, collect and reside in our atmosphere for up to thousands of years (although human activities today release much greater amounts of these gases into the atmosphere). The concentrations of these gases in our atmosphere play critical roles in controlling global temperatures.

The origins of magmatic volatiles remained a controversial topic until relatively recently. Early studies in the 1960s suggested that water dissolved in magma was primarily meteoric, originating as rainfall that circulated within the crust before being incorporated into magma.

Interactions between seawater and rocks at mid-ocean ridges lead to the formation of hydrous minerals that ultimately store components of seawater within oceanic lithosphere.
Beginning in the late 1980s, scientists recognized another, potentially deeper source for volatiles at subduction zones (Figure 1). At these convergent tectonic plate boundaries, where one lithospheric plate sinks beneath another, volatile-laden material is recycled from the shallow and surficial Earth into its deep interior. Most of Earth’s subaerial volcanoes (i.e., those that are exposed to the atmosphere) are found along volcanic arc systems above subduction zones. By examining the abundances of carbon, nitrogen, and noble gases like argon and helium, researchers demonstrated that most of the CO2 and nitrogen released at these volcanoes originated from the subducting plates [Marty and Jambon, 1987]. Later studies showed the same for magmatic water at volcanic arcs [Giggenbach, 1992].

It is now known that the volatiles released at arc volcanoes were originally incorporated into the lithosphere largely through processes occurring within the seafloor millions of years earlier. The global mid-ocean ridge system, a 65,000-kilometer-long divergent plate boundary that accounts for most of Earth’s volcanism, is key in volatile assimilation. These ridges are localities of intense hydrothermal circulation of seawater through the crust, where fluids migrate through developing faults and fractures and fluid convection is driven by heating from submarine volcanism and magmatism. The resulting interactions between seawater and rocks at mid-ocean ridges lead to mineral alteration and the formation of hydrous minerals that ultimately store components of seawater within oceanic lithosphere [ Alt, 1995].

Sediments deposited and rock formed atop seafloor crust as a result of sedimentary processes in ocean basins also store such elements as hydrogen, sulfur, and carbon [ Jarrard, 2003]. And immediately prior to subduction, a final and critical hydration stage results from the bending and faulting of the lithosphere at subduction margins, which enables deeper and more pervasive hydration [Ranero et al., 2003]. Following subduction, some of these volatiles are later released back into the atmosphere as water, CO2, SO2, and other gases because of magmatic and volcanic processes.

The potential role that faults play in allowing seawater to infiltrate and hydrate oceanic mantle was of wide interest to the MARGINS research community, and investigations of the topic continued during the GeoPRISMS program. Recent work has since confirmed that faults do indeed penetrate the lithosphere, drive fluids into the crust, and likely hydrate the crust and the uppermost mantle [e.g., Grevemeyer et al., 2018]. This work has provided more accurate constraints on the volumetric inputs and outputs of volatiles at subduction zones.

These studies also revealed that although some volatiles delivered into the deep Earth at subduction zones are released back into the atmosphere and the ocean at arc volcanoes, large volumes also remain trapped in the subsurface. Studies now point to higher volatile storage resulting from subduction than previously thought, with these volatiles incorporated into minerals in the crust and the mantle.

Bending-related hydration prior to subduction could contribute the largest amount of water entering subduction zones. Some theoretical and observational studies suggest that volatiles may penetrate tens of kilometers into the oceanic mantle because of this bending [Cai et al., 2018], with the oceanic mantle storing 4 times more water than subducting oceanic crust. However, contrasting studies suggest that volatile penetration is limited to the top few kilometers of oceanic mantle [Korenaga, 2017], leaving the subducting mantle with 4–8 times less water than the overlying oceanic crust. As such, bending-related hydration of the oceanic crust and mantle remains poorly constrained. Refining the large uncertainties in water fluxes at subduction zones is critical for balancing the global water budget.

Because CO2 is a greenhouse gas that plays a key role in controlling Earth’s climate, the scientific community is particularly interested in balancing the outputs and inputs of deep carbon in addition to studying water fluxes. The amount of CO2 in Earth’s atmosphere has remained within a narrow range (typically 150–400 parts per million) throughout the past 10 million or so years, conditions that have maintained an “icehouse climate” (as distinct from “greenhouse climate” periods in the more distant past).

Stable atmospheric CO2 levels require a balance between deep carbon outputs and inputs. But compilations of carbon fluxes reveal that the amount of carbon transported into Earth’s interior by subducting plates significantly exceeds the amount released at volcanic arcs [Kelemen and Manning, 2015]. These observations suggest that the crust and the mantle at subduction zones sequester substantial quantities of carbon, and likely also other critical volatile components.

The GeoPRISMS program targeted studies at other potential sources of deep carbon. In particular, the role of continental rifts (e.g., the East African Rift System) has been of significant interest. Not only are large magma volumes produced at these settings, but they also represent locations where Earth’s continents split apart through the formation of deep cracks and faults (Figure 1).

Improving the Picture of Earth’s Volatiles

Over the past few decades, much progress has been made toward constraining global water and carbon fluxes in and out of Earth’s interior. But significant gaps remain in our understanding, particularly of carbon emissions from volcanically and tectonically active regions as well as of fluxes of other important volatiles such as nitrogen, methane, and halogens.

Technological advances using satellite- and unoccupied aerial vehicle–based remote sensing, combined with high-resolution geophysical studies and geodynamic models, may help track emissions from these environments and are needed to obtain a more complete picture of volatile fluxes on Earth. Quantifying these fluxes is relevant for many current and future community scientific efforts and is essential in developing a comprehensive understanding of past and current environmental change on our planet as well as of Earth’s volcanic and seismic hazards.