*One of the authors of a book recently published by AGU summarizes its main themes.

Scientists know much more about what happens after an earthquake (e.g. fault geometry, slip rates, ground deformation) than the various and complex phenomena accompanying the preparatory phases before a seismic event. Pre-Earthquake Processes: A Multi-disciplinary Approach to Earthquake Prediction Studies, a new book just published by the American Geophysical Union, explores different signals that have been recorded prior to some earthquakes and the extent to which they might be used for forecasting or prediction.

It should not be surprising that a large accumulation of stress in the Earth’s crust would produce precursory signals. Some of these precursors have been correlated with a range of anomalous phenomena recorded both in the ground and in the atmosphere. These have been measured by variations in radon, the electromagnetic field, thermal infrared radiation, outgoing longwave radiation, and the total electron content of the ionosphere.

For example, the French Detection of Electro-Magnetic Emissions Transmitted from Earthquake Regions (DEMETER) satellite mission (2004-2010) was the first to systematically study electro-magnetic signals in relation to earthquakes and volcanoes. Earlier in 2018, the China Seismo-Electromagnetic Satellite (CSES-1) was launched, dedicated to monitoring electromagnetic fields and particles. There is also a global initiative to develop and coordinate test sites for observation and validation of pre-earthquake signals located in Japan, Taiwan, Italy, Greece, China, Russia, and the United States of America.

We have carried out statistical checks of historic data to study the correlations between precursor signals and major earthquake events. For example, a decadal study of statistical data for Japan and Taiwan suggested a significant increase in the probability of electromagnetic, thermal infrared, outgoing longwave radiation, and total electron content measurements before large earthquakes [Hattori and Han, 2018; Liu et al., 2018]. A study of satellite data from DEMETER for more than 9000 earthquakes indicated a decrease of the intensity of electromagnetic radiation prior to earthquakes with a magnitude greater than five [Píša et al. 2013, Parrot and Li, 2018]. These results suggest that the earthquake detection based on measurements of these variables is better than a random guess and could potentially be of use in forecasting.

Our book also presents testing of the CN earthquake prediction algorithm for seismicity in Italy [Peresan, 2018], the first attempt of combining probabilistic seismicity models with precursory information [Shebalin, 2018], and the testing of short-term alerts based on a multi-parameter approach for major seismic events in Japan, Chile, Nepal and Iran [Ouzounov et al., 2018]. Further testing is needed to better understand false alarm ratios and the overall physics of earthquake preparation.

Based on our international collaborative work, we found that reliable detection of pre-earthquake signals associated with major seismicity (magnitude greater than 6) could be done only by integration of space- and ground-based observations. However, a major challenge for using precursor signals for earthquake prediction is gathering data from a regional or global network of monitoring stations to a central location and conducting an analysis to determine if, based on previous measurements, they indicate an impending earthquake. 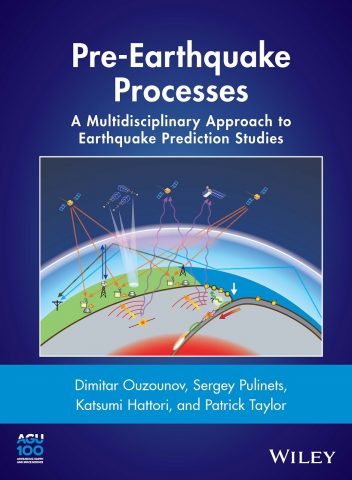 We also found that no single existing method for precursor monitoring can provide reliable short-term forecasting on a regional or global scale, probably because of the diversity of geologic regions where seismic activity takes place and the complexity of earthquake processes.

The pre-earthquake phenomena that we observe are intrinsically dynamic but new Earth observations and analytical information systems could enhance our ability to observe and better understand these phenomena.

Editor’s Note: This blog post has been updated to make clear that its author is also an author of the book that is the subject of the article. It is AGU’s policy to publish an Editors’ Vox post on all AGU books; that the blog post’s author coauthored the book should have been disclosed up front.

Reading the Leaves to Track Environmental Hazards and Health