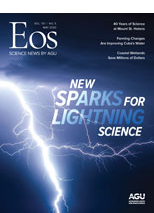 If lightning strikes anywhere in the Western Hemisphere, odds are it has already been detected and mapped by satellite-bound cameras orbiting some 35,000 kilometers above Earth.

Lightning flashes are more typically mapped from ground-based networks using radio frequencies to generate precise data on the order of meters. However, ground-based systems have a limited line of sight. The view from a satellite does not, for example, need to “account for things like tree lines or city skylines or even just general dissipation over distance,” said Michael Peterson, an atmospheric scientist at Los Alamos National Laboratory in New Mexico.

The idea of using a satellite to detect lightning has been around since at least the 1980s, but with the launch of the National Oceanic and Atmospheric Administration’s (NOAA) Geostationary Operational Environmental Satellite–R Series (GOES-R) weather satellites starting in 2016, researchers and forecasters have attained unprecedented levels of lightning data from the Geostationary Lightning Mapper (GLM) instruments attached to the satellites.

An interdisciplinary team of researchers now has developed a technique that can map out the lightning flashes GLM detects across the entire Western Hemisphere in real time.

The new technique was reported in the Journal of Geophysical Research: Atmospheres in December 2019 and has been adapted for use by the U.S. National Weather Service (NWS).

The GLM is essentially a video camera in space that captures lightning flashes across the Western Hemisphere at 500 frames per second. “There’s very little dead time. No matter how rare the lightning flash is, you’re probably going to see it,” Peterson said.

But that deluge of data comes with a downside. “You can’t send all that video data down to the ground,” said Eric Bruning, an atmospheric scientist at Texas Tech University in Lubbock and lead author on the study. Instead, the data are sent as pixels attached to geolocation information that clustered into lightning flashes. “For a lot of users, it’s just really challenging to even know what to do with those data,” he said.

The new technique reconstructs and spatially maps the lightning flashes while retaining the quantitative physical measurements made by the GLM.

“In a way, it’s just restoring the video nature of the camera,” Bruning said.

The researchers demonstrated that this space-based lightning mapping technique can distinguish the many tiny flashes of lightning within thunderstorm cores and the large lightning flashes that are part of mesoscale storm systems.

Using this technique, it would be possible to track the origin of so-called bolts from the blue that occur without rain, said Christopher Schultz, a research meteorologist at NASA’s Short-term Prediction Research and Transition Center in Huntsville, Ala., and coauthor on the study. Seeing the origin of the flash is important to anticipate future lightning and is not possible with traditional ground-based lightning data. This capability is important for public safety because “the majority of injuries and fatalities occur just before the rain has started or just after the rain has ended,” Schultz said.

“Right now the main users are [at] the National Weather Service, and that’s mainly because the instrument is brand-new to the public,” said Schultz. He expects that as the technology evolves and it gets into the public’s hands, it will become more widely used, like radar is now.

“It is certainly useful to be used in real time, but it’s not as useful as it could be,” Peterson said. One major caveat with the technique is that it relies on the data provided by NOAA and assumes their veracity. “Unfortunately, the algorithm is not perfect.”

Because of the complexity of the data, large flashes of lightning are automatically split into multiple flashes, explained Peterson. He recently published a new processing system to stitch these smaller flashes back together. “Now, this isn’t a huge deal in terms of overall statistics. We’re talking 4% to 8% of all lightning depending on what storm you’re looking at.”

Still, the latest study adds a powerful new tool for scientists and forecasters studying lightning.  The technique, which is available as open-source software, also grants “the ability to use lightning to monitor the climate and also to even study storm processes in places where we don’t have the rich radar network that we have in the U.S.,” Bruning said.

“I think it’s important to keep that global perspective in mind,” he added.